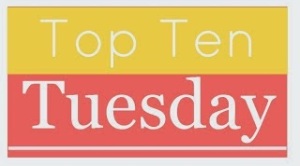 Okay so today’s post is kind of a freebie, the prompt is Top Ten Books Which Feature Characters Who……(fill in the blank), so even though I know this is going to be a popular one, I’ve chosen to do Books That Feature Strong Female characters because there is nothing I love more than a strong female character, and I thought that would be the easiest thing for me to do! So here we go, my top ten strong female characters (as usual in no particular order).

1. Annabeth Chase from PJO and HOO by Rick Riordan-Annabeth is awesome, she is smart but strong too (I love girls that prove this is a possible combination, you don’t have to be one or the other) and she knows how to fight and take care of herself. I mean the girl ran away from home when she was seven! You always forget that she has dyslexia because of how much she loves to read. She has real flaws, she can be selfish, and has great pride but she acknowledges her flaws and she’s very relatable as a teenage girl, even though she’s a demigod.

2. Hermione Granger from Harry Potter series by JK Rowling-I love Hermione, for many of the same reasons that I love Annabeth, but make no mistake, these two girls are not the same. I love how smart Hermione is, but also how brave she is and how loyal she is to her friends. I also love that she’s not the prettiest girl, because that’s very relatable to teenage girls. I love how kind she is, and how much empathy she show toward people, and that she never apologises for who she is. Plus let’s face it, Harry would never have made it to the fight with Voldemort without her!

3. Tessa Blackthorn from Blind Beauty by KM Peyton-Tessa is a young girl with an attitude problem, and a pretty messed up family, but she fights for what she wants, and what she wants is to ride her childhood horse Buffoon in the Grand National. It’s an impossible dream, but Tessa has great determination, and she overcomes all of her personal difficulties, never giving up on her horse even when others might.

4. Meggie McGregor from Noughts and Crosses series by Malorie Blackman-I mean this woman goes through so much, she loses her entire family. There are different kinds of strength, and the emotional strength that Meggie McGregor has, just to carry on after she suffers loss after loss in her life, is incredible.

5. Sephy Hadley from Noughts and Crosses series by Malorie Blackman-Sephy never accepts what her society tells her is right, she knows that she doesn’t hate the noughts and she doesn’t know why all the other Crosses do, and she’s always questioning why things are the way they are, and why people don’t try to change them, she desires change in their society. She stands up for what she believes in, and she really grows over the course of the story, enough to make a horrible choice at the end, doing what she knows is right even though it breaks her heart.

6. Minka Singer from The Storyteller by Jodi Picoult-Minka loses her whole family in The Holocaust, and yet she shows a remarkable amount of strength and perseverance, given that she suffers horrendously during her time in Auschwitz. The fact that she makes it through Auchwitz alive is testament to the strength of her character, and that she is still a kind compassionate person, after all she went through, is incredible. Minka is a beautiful character and her story is heart wrenching.

7. Risa Ward from Unwind by Neal Shusterman-Risa is smart, always thinks before she acts and she is very resourceful, able to take care of herself. She is tough and very distrustful initially given her upbringing in a State Home, so it is wonderful to see her opening herself up to Connor. She is caring, and becomes a medic at the graveyard. Without her smarts on how to get food and clothes, she and Connor would probably have never made it to the graveyard, and her resourceful nature comes in useful when she runs away from Roberta at the end of book 2. She stands up for what she believes in and refuses to accept a spine from an Unwind even though it means she is paralysed (although eventually she is forced to accept one). Her strength mainly lies in her smarts and her resourcefulness.

8. Reyna Avila Ramirez-Arellano from HOO by Rick Riordan-Reyna is a strong fighter that’s for sure, but her power is lending her strength to others, and that is even better I think, that her ability is that she can pass her own strength into other people when they need it. I love the fact that she realises she doesn’t need a guy, she’s strong enough on her own. She can hold her own against anything she comes up against and she’s a seriously good friend.

9. Minerva McGonagall from Harry Potter series by JK Rowling-I mean this woman is awesome! She does not tolerate stupidity from anyone, is very strict but yet has this dry sense of humour, which I love. She always says what she thinks and although she might come off as cold, she truly cares about her students. Plus, the woman can hold her own in a fight! She is without a doubt one of my favourite Hogwarts teachers.

10. Aelin Ashryver Galathynius (Celeana Sardiothien) from Throne of Glass series by Sarah J Maas-The woman is a trained assassin! She’s had a horrific past, and gone through terrible things and yet she’s always managed to come out the other side stronger than ever. She’s smart, she’s a great fighter, not to mention extremely powerful, Aelin Galathynius embodies the strong female character, whilst still maintaining an interest in pretty dresses and cute guys like a normal nineteen year old girl.

Okay, I know there are many more strong female characters than these, but I couldn’t say every strong female character I’ve ever read about, otherwise the list would be way too long! So do you agree with my picks? Are there others you would have chosen? For fellow bloggers what did you choose for this week’s post? Next week, I will be doing Top Ten Books I Will Never Read, but tomorrow is another Wishlist Wednesday, so look out for that!