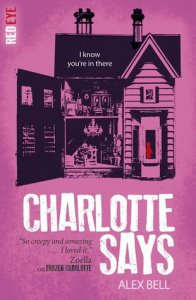 I received this book for free via Netgalley. This in no way affected my opinion of the book.

As always, thank you to Netgalley and Stripes Publishing for allowing me to read this book.

I enjoyed reading Frozen Charlotte by this author over the summer, so when I saw that there was going to be a prequel to it coming out this year and that it was available on Netgalley, I immediately jumped at the chance to read it and requested it. Luckily for me, my request was granted! If possible, this book was even creepier than Frozen Charlotte and I definitely felt more unsettled when reading it, but I think I enjoyed Frozen Charlotte just a tad more? Maybe because I had no expectations. I also kind of knew where the story was going to go in this one because a lot of the events are mentioned in Frozen Charlotte, having said that, the way events unfurled really surprised me! Here is a short synopsis of the book:

The much-anticipated prequel to the bestselling FROZEN CHARLOTTE, a Zoella Book Club title in Autumn 2016.
Following the death of her mother in a terrible fire, Jemima flees to the remote Isle of Skye, to take up a job at a school for girls. There she finds herself tormented by the mystery of what really happened that night.
Then Jemima receives a box of Frozen Charlotte dolls from a mystery sender and she begins to remember – a séance with the dolls, a violent argument with her step-father and the inferno that destroyed their home. And when it seems that the dolls are triggering a series of accidents at the school, Jemima realizes she must stop the demonic spirits possessing the dolls – whatever it takes.

This book was definitely a lot more intense than the first one, what with the dolls, the evil schoolmistress, Jemima’s sadistic stepfather, all of it together makes for a very intense reading experience and I was definitely more horrified at this one than I was at the first one. It’s a lot more graphic as well, there’s animal abuse, human abuse, murder, some pretty nasty injuries, so definitely not for the fainthearted and possibly more for older teens than younger ones, I think. Also warning to anyone with the same phobia of needles as me, there are some scenes involving needles in this, so you may want to flick past those!

I found it interesting that the book started with dialogue as it’s not something that you see very often but I think it worked well here.

I liked the integration of the flashbacks with the present story, it was all woven together really well and the transitions between past and present weren’t clunky like they sometimes are.

This book answers many of the important questions we were left with from the first book, why are the dolls evil, how did they get to the school, what happened for the school to be closed etc whilst still leaving the end slightly open, so you’re not entirely sure what will happen to all the characters once the story is over.

I’m not sure how I really felt about Jemima as a character, for most of the story I was really rooting for her, I wanted her to find out what was happening with the Frozen Charlotte dolls and I felt really bad for what happened to her with Redwing but there was a big twist at the end that kind of changed my opinion of her? I did find it a bit weird that she was 17 and an assistant schoolmistress, but this was the 1900’s so I think that was pretty normal back then.

The schoolmistress, Miss Grayson, was absolutely horrible, I mean it fits with what I know about schools in the 1900s, but it was still quite shocking to see how awful she was! I felt really bad for all the poor girls, especially Estella, who I just wanted to give a massive hug to.

The dolls were just as creepy, if not more so than in the first book. It’s cemented now, I definitely hate dolls. Why do we think those things are cute? They’re freakin’ terrifying!

Jemima’s stepfather Redwing, is one of the most atrocious human beings ever, he’s truly awful and the chapters detailing his forcing Jemima to communicate with his dead daughter were very difficult to read.

I didn’t really see the point of Henry. He seemed to just be there to provide the requisite YA love interest and didn’t have much of a personality aside from being a nice, too perfect, kind of blank guy.

I will admit, wasn’t a huge fan of the sexism in this book. I know it’s the time period, but this is a story where demonic dolls can control human beings, I think you can tone down the sexism! There was also the classic YA girl on girl hate that needs to die a slow painful death like now please? It’s getting old!

I loved the little cameo from Cameron, it was a nice throwback to Frozen Charlotte.

Once again, the setting was awesome, I love reading books set in Scotland and it’s such a good setting for horror novels, so atmospheric! Alex Bell is definitely very good at setting a scene.

The pacing felt a lot better than the first book, the chapters were shorter, the mystery felt tighter, and actually by the end I was wishing there was more!

The epilogue felt very similar to the one in the first book, except I actually liked it better here, because implying that the dolls are still out there doing damage, leads quite well onto Frozen Charlotte.

Overall, this was another engaging horror story from Alex Bell, it was a fast, if not necessarily an easy read as it’s quite horrifying and if you liked Frozen Charlotte, then I would definitely recommending continuing (or starting, if you want to read this first!) the dolls’ story.

My next review will be of Kiersten White’s And I Darken, which I finished last Sunday, but have been so busy with essays, I haven’t had a chance to write it yet. Will try to get it up ASAP!