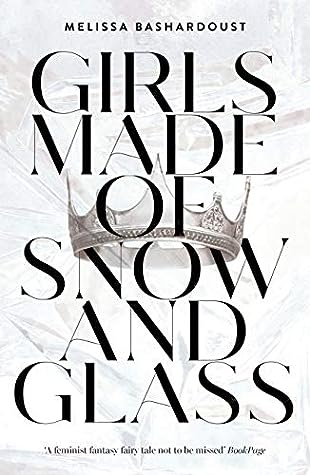 Book: Girls Made of Snow and Glass

Published By: Hodder and Stoughton

Content Warnings: Parental abuse/neglect, blood, mentions of death and loss of loved ones

Thank you to Hodder and Stoughton and Netgalley for allowing me to read this book, this in no way affected my opinion of it.

I came across Girls Made of Snow and Glass before it’s initial release in 2017, but was never able to get hold of a copy here in the UK, so it kind of fell off my radar for a while until I saw it on Netgalley a few months ago. I thought a feminist Snow White retelling sounded really great, but I found myself somewhat disappointed by the slow pace and lacklustre plot. Here is a short synopsis of the book:

Sixteen-year-old Mina is motherless, her magician father is vicious, and her silent heart has never beat with love for anyone. In fact, it has never beat at all, for her father cut it out and replaced it with one of glass. When she moves to Whitespring Castle, Mina forms a plan: win the king’s heart with her beauty, become queen, and finally know love. The only catch is that she’ll have to become a stepmother.

Fifteen-year-old Lynet looks just like her late mother, and one day she discovers why: a magician created her out of snow in the dead queen’s image. Lynet would rather be like her fierce and regal stepmother, Mina, but when her father makes her queen of the southern territories, Mina starts to look at Lynet with something like hatred, and Lynet must decide what to do – and who to be – in order to win back the only mother she’s ever known . . . or else defeat her once and for all.

My biggest complaint for this book has to be the pacing. IT WAS SO SLOW, for like 75% of the book, basically nothing happens and then it’s all resolved in like 30 pages. I mean I’m all for building things up first, but if it takes over 300 pages for your story to really get moving, then you’re definitely doing something wrong. It was only 372 pages but it felt so much longer!

I do like that the author tried to do something different with the Snow White story, by changing the focus to the relationship between the stepmother character and Snow White and I appreciate that it did address some feminist issues though it felt like kind of surface level stuff. I also appreciated that the complexities of the stepmother/stepdaughter relationship were addressed far more here than they are in the original Snow White story.

The characters didn’t feel massively developed? I mean I get it, it’s Mina and Lynet’s relationship is central to this and so they are the focus but everyone else around them did feel like basically just props. And even for the two leading ladies, I would say we get far more of an insight into Mina than Lynet as we get the flashbacks to her past.

The world building is also very minimal as for the most part, the entire novel takes place within the grounds of Whitespring and even when Lynet does go South, we don’t get all that much of a sense of what it’s like there and though the tensions between the two regions are mentioned, it’s not really expanded on, so we don’t get all that much of an idea of the state of the world that Lynet and Mina inhabit.

For a book that is advertised as being an LGBTQIA+ novel, it did feel like Lynet’s relationship with Nadia is kind of sidelined, it’s extremely slow burn, which is fine, but it also takes a backseat to both of Mina’s heterosexual romances which doesn’t really feel great.

The dual past/present timelines worked well, it can always be a bit tricky working with different timelines (Lynet is in the present, Mina’s starts in the past and works towards the present) and Bashardoust handled it really well.

The writing style was fine, if a little simplistic.

It’s kind of magic light, which is fine, but it also builds into the world-building issues, since we don’t really know how the magic works, it makes little sense as to how Mina is able to survive with a glass heart and how Lynet doesn’t simply melt when she goes South.

The villain isn’t really clearly defined and the stakes never really feel all that high, because we as readers know that Mina truly cares for Lynet, so it never feels like she’s in any danger at all, the plot is pretty predictable, so you just know that everything is going to work out in the end.

Pretty much every problem in this book could have been solved with proper communication, which I know happens in a lot of books, but it’s just SO FRUSTRATING when you know that everything could be worked out if these two characters just SPOKE TO ONE ANOTHER.

Overall, this was definitely a disappointment with the intriguing relationship between Lynet and Mina not being enough to save the lacklustre plot and slow pacing that really bogged down this book.

My next review will be of Zoraida Cordova’s Incendiary, my latest Netgalley read which I’m almost done with.