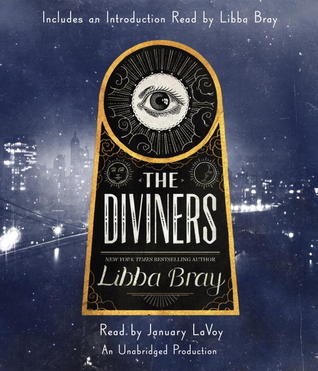 Bechdel Test: FAIL-All conversations between the girls somehow come back to the guys, whether it is about Naughty John, or Jericho, or Sam.

Another month, another audiobook review. After my success with Priory, I decided to keep the audiobook ball rolling and I think I’m going to try and do one a month for the rest of the year, it’s been a pretty great way to get extra reading in and they’re super useful on the bus. Anyway, my friend Nicola absolutely loves The Diviners books and has kept recommending them to me, so since I signed up to Audible and had heard the audiobook was good, I decided to try it.

I have to admit, I have mixed feelings about this one. On the one hand, the narration was excellent, the writing was really evocative and creepy (if leaning on the side of over-descriptive) but it was SO SLOW. It took so long to really get into the book, and this isn’t a short book anyway, it’s just over eighteen hours and you’re waiting a good ten or eleven hours for things to get really good.

SOMETHING DARK AND EVIL HAS AWAKENED. . . .
Evie O’Neill has been exiled from her boring old hometown and shipped off to the bustling streets of New York City—and she is pos-i-tute-ly ecstatic. It’s 1926, and New York is filled with speakeasies, Ziegfeld girls, and rakish pickpockets. The only catch is that she has to live with her uncle Will and his unhealthy obsession with the occult.

Evie worries her uncle will discover her darkest secret: a supernatural power that has only brought her trouble so far. But when the police find a murdered girl branded with a cryptic symbol and Will is called to the scene, Evie realizes her gift could help catch a serial killer.

As Evie jumps headlong into a dance with a murderer, other stories unfold in the city that never sleeps. A young man named Memphis is caught between two worlds. A chorus girl named Theta is running from her past. A student named Jericho is hiding a shocking secret. And unknown to all, something dark and evil has awakened. . . .

Honestly I’m kind of unsure how to review this one, as it’s quite a hard one to review. The plot, such as it was, is ostensibly quite simple, a murder mystery following our protagonists as they attempt to solve a series of occult style killings. However within this, there are numerous subplots, and multiple different POVS, and it all got rather hard to follow. This wasn’t helped by the fact that the audio chapters ran over multiple parts, so one chapter could take several parts, it was difficult to keep track of where I actually was in the story, I had to keep rewinding to work out if it was a new chapter or not.

I usually enjoy multiple POVs but in this book, it felt like we followed too many irrelevant characters, characters would appear for a chapter and then leave again, and they were clearly just there to set up for the next book, but didn’t really have anything to add to this book. I think if this book had just followed Evie, Sam, Will & Jericho, that would have been okay, Theta and Memphis didn’t really seem to add much and all the other POVs were extraneous, either there to show the murders or to set something up for the next book.

The writing was very evocative and really set the scene, and the creepy tone for the book, though I think that was in large part thanks to the excellent narration but I do think Bray had a tendency to over-describe, I really don’t need to know the pattern of every leaf falling on New York streets, especially since my visualisation isn’t that great anyway!

I felt like the cast was a bit too sprawling to really get to know many of the characters that well. Evie is probably the one that we follow most, and she is well….quite annoying. She’s very selfish, and kind of obnoxious and doesn’t really care if her actions hurt people, which does make her realistic as a seventeen year old, but wasn’t the most fun to read about. I also felt like she didn’t really change that much over the course of the novel? She’s still largely the same person at the end as she was when she came to New York. The other characters we just don’t really see enough of to care much about, I got a vague sense of each of their personalities, but for the most part, the supporting cast felt quite flat and some characters, like Mabel, Evie’s friend, felt pretty pointless.

I did like that the parental figure in this book, Evie’s Uncle Will (annoyingly known as “Unc” by Evie) actually played a role in the plot, though he does seem to run very hot and cold, one minute wanting to send Evie home and not wanting her to use her powers, and the next encouraging her.

I appreciated that Libba Bray attempted to include diversity in her book, there are LGBTQ+ characters, and POC characters, though whilst she acknowledged the issues that these characters would have faced in this time period, it felt to me like it was done in a rather shallow way. You could definitely tell that this was an earlier YA novel, before the real push for diversity in YA.

I liked the supernatural powers, but I wished they had been dived into a bit more, we only really get to see Evie’s powers and then a surface level of what the others can do, so I hope the next book explores that more.

The murder mystery also felt somewhat tangential? Like if it hadn’t been there, it wouldn’t have made that much difference. We know exactly who is doing the killings, the whole time and the rest of the book just seems to be marking time till the big showdown at the end. Whilst I liked the cult aspect, I did feel like some of the murders were a little too gruesome for me.

The book deals with a lot of difficult topics which I appreciated, though it did feel a bit overstuffed at times, Bray explores immigration, eugenics, racism, gang violence, the effects of war, all things that were being dealt with at the time, but it felt like she was looking at too much and didn’t really do any of the topics justice. She also touches on illegal abortion, and it’s very rare to see abortion talked about at all in YA, let alone in this time period, so I really appreciated that. Bray had clearly done her research about the period which I did appreciate but sometimes it felt like she was trying to show that off a bit too much and including things just for the sake of it!

One thing I felt a little uncomfortable with was that Evie’s dependency on alcohol was really not addressed at all. She’s pretty consistently drinking to the point of hangovers and being ill, and it felt like she had a problem that wasn’t really addressed properly, though maybe it will be in the next book? I hope so, because it definitely seems like there is something more going on there.

I didn’t really like the romances, there’s hints of a love triangle between Evie and Jericho and Sam (another thing that shows this was definitely a 2012 novel!) which makes me want to run for the hills. I could kind of see Evie and Sam, they did seem to have some chemistry, but the fact that he kissed her without her consent kind of turned me off him.

The book definitely dragged on too long, once the main mystery has been wrapped up and you think the book will end, you then get another 20 pages of set up for the next book, introducing plots that have nothing at all to do with the story in this book, and I definitely felt like they could have been saved for the next book.

Overall, this was a decent enough book, and it’s very different to a lot of fantasies that I’ve read, and I loved the narration, but it was just way too slow and there wasn’t really enough plot to justify the length. Hopefully with all the set up for book 2 in this one, it will be much better!

My next review will be of Vengeful by VE Schwab, which I finished today, so my review of that should be up during the week!