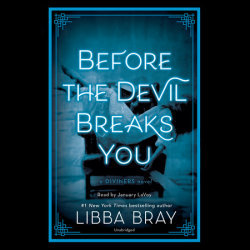 Book: Before The Devil Breaks You (The Diviners #3)

BECHDEL TEST: Uncertain, honestly I didn’t keep very good track, I was so engrossed in the book and it’s not as easy to flick back through audio as it is in a physical book!

This series has just got better and better with each book. What started as a promising but relatively shaky first book, progressed into an exciting series with a brilliant and sprawling cast of diverse characters, with each book upping the stakes more and more. This book is the most high stakes yet, as all the Diviners come together to save America from the onslaught of ghosts, caused by the mysterious King of Crows. After the events of this book, I’m very excited to see what will happen in the conclusion next year. Here is a short synopsis of the book:

After battling a sleeping sickness, The Diviners are up against a group of new and malevolent foes–ghosts! Out in Ward’s Island sits a mental hospital full of lost souls from people long forgotten. Ghosts who have unusual and dangerous ties to the Man in the Stovepipe Hat also known as the King of Crows.

With terrible accounts of murder and possession flooding in from all over New York City, the Diviners must band together and brave the ghosts haunting the asylum to bring down the King of Crows.

Heart-pounding action and terrifying moments will leave you breathless in the third book of the four-book Diviners series by #1 New York Times bestselling author Libba Bray.

Beforre we start, there are a lot of trigger warnings for this book, including: sexual assault, eugenics, medical abuse, body horror, Holocaust imagery, murder, mentions of paedophilia, homophobia, racism, many of which will be touched on in this review.

Once again, the narration of this book was just brilliant. January LaVoy has definitely been my favourite narrator in my admittedly short so far foray into audiobooks, the way she does such distinct voices for all the characters, she really throws herself into her performance, even singing at points during the story, which all adds to the creepy atmosphere of the book and really enhances your reading experience.

I loved that the Diviners were all working together in this book, in the last two books, the cast has felt somewhat disparate, each one working towards their own thing but in this book, the whole group came together. I loved the dynamics between them, and this book explores different combinations of characters as well, so you truly get to see how every one of the characters interacts with the others. I found it much easier to keep track of all the characters in this book, I think in large part because they were together a lot more and their stories were more intertwined.

Speaking of character dynamics, the dialogue in this is just brilliant. If you’ve been following my blog for a while, you’ll know that dialogue is one of the things that I really love in books and this book has witty banter in spades, which really adds some levity, especially when things are starting to get quite dark in the story.

I said in my review of Lair of Dreams that I hoped Theta got more of her own plot in this book, unrelated to Memphis and Henry and boy did Libba Bray deliver on that front! Theta is a survivor of sexual assault and an abusive marriage, and this book really explores her journey of healing and coming into her own power and realising that she doesn’t have to be held back by her abuser any more. It was a really powerful story and I think Bray handled it with care and consideration.

I was also glad that Mabel, who was largely sidelined in the first two books, finally got more of a story in this one, and really came into her own in terms of figuring out who she wanted to be and how she wanted to fight for her cause.

As with the other books, the diversity in this book is amazing, we have POC characters, with Memphis, and Isaiah, and Ling and now Theta confirmed to be biracial (her birth mother was Cherokee), we have LGBTQ+ characters with Henry being gay and Ling being homoromantic asexual, we have Jewish characters in Sam and Mabel, we have Ling with her disability & Evie being confirmed to have depression. These characters come from all different backgrounds and it’s wonderful to see that in a historical novel, because so often authors take the easy way out and have only white, straight characters because it’s “accurate to history” (History graduate here, it’s not).

Then we come to the romance in this book. Memphis and Theta’s relationship continues to face obstacles, especially when she pulls away from him because of Roy and of course because of the opinions of interracial romance in society in the 1920s. Their relationship is really sweet though, they are both so supportive of each other and given all of Evie’s relationship drama, it was nice to see a relationship that faces it’s troubles, but both people love and support each other and know that they want to be together.

Okay so Evie. The love triangle of the first two books is still alive and well for most of this book, and it does get a little tiresome seeing her go back and forth, especially when the chemistry between her and Sam is so damn obvious! I was glad that the love triangle was resolved, but I wasn’t really happy with the way Bray did it. This might get slightly spoilery, but I think it’s important to talk about: essentially, Jericho attempts to sexually assault Evie, whilst under the influence of serum given to him by Jake Marlowe. Sexual assault SHOULD NOT be used to resolve a love triangle, and I was really disappointed that Bray went there, considering how carefully she handled Theta’s story. I’ve genuinely never felt so uncomfortable reading something in my life, I think the audio element definitely heightened that for me, as I don’t picture things very well in my head, but hearing Evie’s struggles…….I actually out loud said “No, No, No” when I was listening and almost switched the audio off, so I wanted to warn about that scene to other readers, because I didn’t see it coming and it really threw me.

We also had Mabel and her new beau Arthur, and I have to admit, I didn’t really care too much for their romance, mostly because we didn’t really know Arthur, so it’s kind of hard to root for and see chemistry in a relationship when you barely know one of the characters.

I liked Evie a lot more in this book than the others, I feel like she really developed as a character and the fact that she knows her friends are more important to her than fame is definitely a big step in the right direction, she developed a lot as a character through this book, which I appreciated, especially after her downward spiral in Lair of Dreams.

I did like that during the few sex scenes that we had in this book (not fade to black, but not overly explicit) that consent was featured in all of them, which is another thing that makes me so annoyed about the whole Evie/Jericho thing because Bray is so careful to include consent in all her sex scenes (not something that you always see with YA authors) that it seems odd she would think it was okay to use sexual assault as a way to resolve her love triangle. I can’t really go into details without being spoilery, but I liked that there was an instance with two characters in the book where the girl is slightly unsure, her partner asks if she wants to stop and she agrees, but then changes her mind, and he again clarifies whether she is sure. Quite often in books, the “Yes” is seen as the be all end all, and this book showed that consent can be withdrawn or regiven even once sex has started and I liked that a lot.

I appreciated that the chapters in this book were organised a lot better than in the other audiobooks in the series, each chapter is largely self contained, and it was much easier to follow from one chapter to the next. I also found the pace much better in this book, Lair of Dreams was somewhat meandering, in this book, the goal is clear, the characters were more streamlined, it all came together for a much faster paced book.

The scenes in the asylum were definitely creepy, though I was expecting from the synopsis for the asylum to play more of a role, but it was actually only featured for a few chapters. I did appreciate that this book highlighted mental health, and the treatment of patients with mental illnesses in the 1920s. I knew a little about eugenics and the sterilisation programme for people in asylums from other books I’ve read but it was great to see Libba Bray touch on it here as well, as I feel like America’s role in eugenics isn’t widely known? It’s largely seen as a phenomenon of Nazi Germany, but actually goes all the way back to Ancient Greece. In fact, the modern field of eugenics was developed by a British scientist Francis Galton, something I didn’t know until writing this post. Nazism was actually the beginning of the end of eugenics rather than the origin of it.

I really liked that this book showed an example of a friendship “break-up” between Mabel and Evie, because I feel like it was coming for a while, the two have been growing apart for some time and YA definitely does not touch on how painful these can be enough, so I liked seeing it here.

I didn’t find The King of Crows quite as compelling a villain as I’d have liked, he’s kind of this faceless Big Bad, which I don’t find particularly scary. I though Jake Marlowe was a much more compelling villain, because he’s the kind of evil that you can recognise from our own world, a guy who does bad things but truly thinks he’s doing them for the benefit of people, even when he hurts others in the process.

I actually read the synopsis for King of Crows before I read this one, so there was a particular event that I knew was going to happen for the whole book and I was basically just looking for it, and waiting for it to happen. I did end up being surprised though, as I wasn’t expecting the person or the circumstances surrounding the event!

There were lots of other twists and turns as well, lots of reveals about Project Buffalo, the 144, Evie’s brother, Sam’s mother and other things that have been hinted at throughout the series. If The Diviners and Lair of Dreams were the set up, Before The Devil Breaks You and King of Crows are the answers. I particularly loved the flashbacks to Will and Sister Walker’s time in Project Buffalo.

Overall, I really loved this third instalment of The Diviners series. We got so many more answers, in the first two books we only really got hints to what was going on, now everything is coming together, the whole gang is united and it’s all setting up for a massive conclusion in the next book. I am very glad King of Crows is out in early 2020 because I’m not sure how long I can wait for it!

My next review will be of my October #RockMyTBR book, The Last Namsara by Kristen Ciccarelli (and yes, I know I said that after my last review, but I finished BTDB first and I wanted to review in reading order).