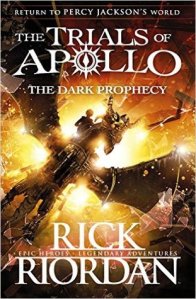 Book: The Dark Prophecy (The Trials of Apollo #2)

I feel like my love of Rick Riordan is well known by now, literally, I will read anything this man decides to publish, I’d even read his shopping list, I’m sure he’d find a way to make it hilarious. I loved the first book in his latest series when I read it last year, so naturally I was really excited to read this book. I devoured it in just a week, which is pretty fast for me, but actually I didn’t enjoy it quite as much as the first one? It was still witty and hilarious and I loved Apollo but I did feel like it kind of lagged a bit in the middle? It just didn’t feel quite as exciting to me as The Hidden Oracle did, although the ending definitely sets up for a very exciting third book! Here is a short synopsis of the book:

The god Apollo, cast down to earth and trapped in the form of a gawky teenage boy as punishment, must set off on the second of his harrowing (and hilarious) trials.

He and his companions seek the ancient oracles – restoring them is the only way for Apollo to reclaim his place on Mount Olympus – but this is easier said than done.

Somewhere in the American Midwest is a haunted cave that may hold answers for Apollo in his quest to become a god again . . . if it doesn’t kill him or drive him insane first. Standing in Apollo’s way is the second member of the evil Triumvirate – a Roman emperor whose love of bloodshed and spectacle makes even Nero look tame.

To survive the encounter, Apollo will need the help of a now-mortal goddess, a bronze dragon, and some familiar demigod faces from Camp Half-Blood. With them by his side, can Apollo face down the greatest challenge of his four thousand years of existence?

I did have to look back to remind myself of what happened in the last book, because I honestly found myself a little confused at the start and you are sort of just thrown back into the action, so I definitely recommend refreshing yourself with the end of The Hidden Oracle! I wish authors put little recaps of their last book in the series at the front, it would be so helpful to those of us who don’t have the time to reread the previous book before the next one comes out!

I still love Apollo, perhaps even more in this book than I did in the last book. He is just so unashamedly himself, whilst still developing so much as a character throughout the book, seeing him grow to care for Meg and all of his other friends to the point where he would willingly sacrifice himself for them was just so lovely. Apollo has such a distinctive voice, compared to say Magnus and Percy who both sound rather similar and I love that. I like that he’s starting to see that being a human isn’t as worthless as he first thought and he seems to be growing to realise that immortality isn’t everything, whilst still retaining that narcissism and humour that I love.

I really enjoyed the dynamic between Calypso, Leo and Apollo and I actually would have liked to have seen more of it, we got it a lot in the first half of the book, but when he’s reunited with Meg, it kind of peters off, which I get, but I thought it was a shame because they were such a great group. I hope we get to see more of them together in the future. I particularly enjoyed the dynamic between Calypso and Apollo, I even kind of strangely ship them, I guess I like that kind of animostic relationship, I even liked them better than Leo and Calypso, who were honestly, kind of boring.

I LOVED Leo being back! Leo Valdez is one of my favourite demigods, he has so much sass and is just so much fun and I loved his dynamic with Apollo, the scenes when they were together had me laughing so hard. I hope that Leo remains a big part of the rest of the series, because he just brings such a fun dynamic to any group that he’s in.

The Waystation was so cool, I love the idea of a building that has a mind of it’s own! I would totally want to live there, it sounds like so much fun.

I liked that we got to see even more characters from Greek myths in this book, it always amazes me that 12 books in, Rick Riordan can still find new gods/goddesses/people from Greek and Roman myths to incorporate into his books. I love that I always come away from reading them feeling like I’ve learned something! I especially enjoyed the net Goddess, Britomartis, she was so funny!

I LOVED Emmie and Jo! It made me so happy to see cute, old, happy, lesbians, I swear, my cold heart warmed so much seeing these two together. I love the idea of two Hunters of Artemis falling in love with each other and leaving because they didn’t mind growing old as long as they could do it together. I would totally read a spinoff with Emmie and Jo because I’m sure they’ve had some crazy adventures in their time! It also made me really happy that there is now a character in the Percy Jackson universe that shares my name. Granted her full name is Josephine, not Joanne, but I’m taking it as a win!

The griffins were so awesome, flying on them sounds like so much fun. I also loved that Festus was back in this book, I’ve missed that mechanical dragon!

The humour in this book was definitely on point, perhaps not as good as in the Hidden Oracle, but I still laughed my way through pretty much the entire book.

There are an awful lot of characters coming back from the previous books now, and whilst I love seeing familiar faces, I definitely get confused with some of the more minor ones. Like Lityerses, I know he was in Heroes of Olympus, but I honestly couldn’t for the life of me remember him at first! I did appreciate that Rick Riordan had a glossary at the back, this helped me a lot when I didn’t recognise a name or a term that he used.

I did love the action scenes when they happened, Rick Riordan has a way of making his action scenes both exciting and hilarious and I love that, but I did feel like the pacing was a little off in this book compared to his other ones, they usually cover very little time (which this one did) and are pretty fast paced and parts of this book, particularly the first section, felt like they lagged. There also weren’t as many twists as the first book, for the most part it was very predictable, which meant it wasn’t quite exciting.

I did like the pop culture references in this, but I felt like the ones Riordan used in this book were a little older, and I didn’t entirely get all of them, so I’m not sure if the audience this book is aimed at would, as they’re a lot younger than me! Also some of the more recent ones will probably be quite dated in a few years!

I loved the new villain Commodus, even though I’m almost 100% certain that Rick Riordan picked him to be part of Triumvirate for the toilet humour! He’s kind of a comic, bumbling sort of villain, as opposed to Nero, who was genuinely scary and I liked the dichotomy between the two emperors. I’m looking forward to seeing who the last emperor is. I liked that he had a history with Apollo, it made the confrontations between them much more believable. I’m almost certain we haven’t seen the last of Commodus and that he will be back in future books.

I liked that we got to see the Hunters again in this book as we haven’t seen them in a while, and it was cool to be able to catch up with Thalia. Plus it felt natural that they would be involved at some point, given that Apollo is Artemis’ brother. It’s nice to know she hasn’t entirely abandoned him. I liked that it was established that no kind of romantic love at all is allowed in the Hunters, as that was a question I hadn’t even realised I’d had!

I liked that this book was again all set in one place, like the last book was in Camp Half Blood, as it allows for a different kind of story to the ones we’re used to in Heroes of Olympus and Percy Jackson, more mini quests as compared to the one large one.

The haikus at the beginning of each chapter were again a great addition, so Apollo, and they give you a little taste of what’s to come in the chapter.

I loved seeing Meg and Apollo’s relationship grow even more in this book, it’s clear he’s coming to really care for her and it’s great to see him go into all over protective mode when it comes to anything to do with Meg. I’m not sure if Meg is my favourite character, but I do love the side that she brings out in Apollo and I would like to see more of her backstory as I sense that there is more to tell there. She kind of falls flat compared to some of the other characters in this book.

It always amazes me how few days a Rick Riordan book covers, I think this entire book spans about a week? Yet so much happens in such a short space of time!

The ending was great, I feel like there’s a great set up for the next book, the “Dark Prophecy” of the title sounds like it’s going to lead to some interesting adventures and some familiar characters returning, and I can’t wait to see what happens next!

Whilst this book was not as exciting as the first one in the series, it was still a solid instalment, with some great humour, the return of one of my favourite characters, Leo, lesbians being adorable, Apollo being awesome and more adventures for our god turned mortal and his motley crew of heroes. I look forward to seeing what Apollo and Meg get up to next!

I’m not sure what my next review will be as I haven’t decided what I’ll read next, I’m currently reading The Perks of Being A Wallflower, but it’s so short that I don’t think I’ll write a review about it, so it will be whatever I read after that!