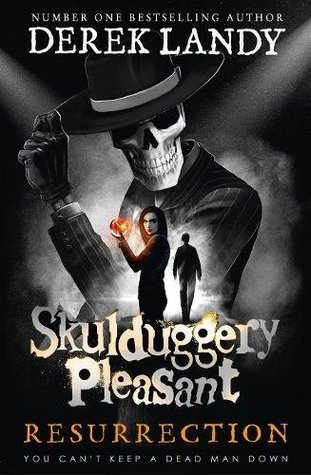 So I was naturally, super excited when I found out at last year’s YALC that Derek Landy was going to be writing a new book in the Skulduggery Pleasant series (he refers to it as Skulduggery Phase 2, which indicates that there might be more new books, so yay for that!), as it is one of my favourite fantasy series, and one of the staples of my teen years. But with that excitement, of course, comes no small amount of trepidation. It’s been three years since the last Skulduggery book and five years in the lives of the characters, you have to wonder if you can fall back in where you left off. Well the answer is yes…..and no. Some things remain the same, the dry, sarcastic humour is back and in full force, Skulduggery is as wonderful as ever. However the new book definitely feels more mature than the original series, understandably so as Valkyrie is older, and it took me a while longer to get into it than the original books, I’m not sure if the plot was as tight as some of the original books had been. Still it was an enjoyable reintroduction back into the world of Skulduggery Pleasant, and hopefully one of many more! Here is a short synopsis of it:

The skeleton detective is coming back to life…again! It’s the tenth, triumphant novel in the Skulduggery Pleasant series, and it will rearrange your world. Skulduggery and Valkyrie are back in the tenth instalment in the bestselling Skulduggery Pleasant series – an incredible and unexpected treat for the legions of fans around the world. We can’t say much but we can say this: Skulduggery and Valkyrie are going to team up with beloved characters from the first 9 books as well as an all-new cast, including new teen co-star Omen Darkly, for an adventure that takes the story to truly global proportions…while answering questions that go right back to the beginning. And Derek says this: “I was halfway through Last Stand of Dead Men, I think, when I realised that I had more stories to tell. I told myself that if Skulduggery and Valkyrie survived the series, I would leave the option open of returning to their world. There were still secrets I need to reveal, after all, and there were still horrors they had to face. They survived the first series. But they’re really going to wish they hadn’t.”

Firstly I would recommend going back and reading the last Skulduggery book before going into this, there are a lot of characters to remember and honestly there were some characters from the previous books that I couldn’t even remember who play a pretty major role in this book, so I would definitely recommend reading nine before this to give yourselves a bit of a refresher!

First off, the humour, as always was on point! It’s actually really hard to add humour into books, I have tried, but it’s so difficult for it not to seem forced. I am honestly in awe at the ease of which Derek Landy writes humour, it never seems forced, it’s always natural and is so much a part of the style of these books, so it was nice to see that continue in this book and helped a lot to balance some of the darker moments.

Skulduggery is still as amazing as ever and we even got another glimpse of Evil Skulduggery in this book, which I liked as we don’t really get to see his dark side particularly often. I would say though that the book focuses much more on Valkyrie and Skulduggery definitely takes more of a back seat. That was one of the things that I missed in this book, there wasn’t so much of them working together, which is obviously the main highlight of the books, so that was a shame.

I actually liked Valkyrie a lot more in these books? This new, mature, broken, reluctant hero Valkyrie was a lot easier for me to get on board with than the arrogant, I am the best hero Valkyrie of the previous books. Naturally everything that Darquesse did in Dying of The Light was going to have an effect on her and I was glad to see this explored throughout the book, especially because PTSD is not something you see very often. I didn’t love that Derek’s still trying to make her out to be the specialist special to special in the magical community, like okay she has this white lightning, that was pretty cool, but she has to be a Sensitive too?

The world has changed so much in the time that Val’s been away, and whilst I get that it’s showing Val’s sense of isolation, it does seem a little implausible that so much changed in the five years she was away as compared to the time she was part of the magical community. Still I did like all this extra world building, I liked getting to see how Roarhaven had expanded and changed, I liked the addition of the magic school, Corrival Academy, that felt like a natural thing to have, I liked getting to see some new magical disciplines. It was an awful lot to take in though, all at once!

The plot was for the most part quite slow paced and it did get a little confusing at times. I don’t know, the new villains just didn’t feel quite scary enough for me, there were chapters that didn’t seem to really contribute anything to the overall plot (like all the chapters with Sebastian and Bennet, what the hell were they about?) and I’m still not entirely sure of what exactly a Neoteric is! Still there were some decent fight scenes and once I actually got into the book, I did find myself enjoying it, I was just confused at times! There were a lot of things added that I felt like we should have heard about before, like if Abysinnia (the new Big Bad) is so evil, why haven’t we heard about her before? And the whole Neoteric thing, shouldn’t we have heard about that before? I get that this is the start of a new series, but the whole set up seemed a bit clunky.

I wasn’t sure if I was going to like Omen at first, after all, he’s not one of our old friends who we’ve grown to know and love, but I really enjoyed his arc. He’s not the chosen one, he’s not special, he’s the Chosen One’s brother and doesn’t really know his place in the world and it was great to see him explore this throughout Resurrection and come to see that he doesn’t need to be The Chosen One to be special, to make a contribution, he can do that as Omen Darkly.

I was so glad that the chapter numbering in this book was consistent, Derek Landy always used to do this really annoying thing in the original Skulduggery series where some of the chapters were named and some were numbered, and I was so happy that in this book it was consistent numbers! The chapter lengths were all pretty decent, although I suppose I will just have to accept that the one page, one paragraph, one line chapters are here to stay! I also loved the title, so accurate for this book, not only with it being the start of a new era of Skulduggery, but with the story itself as well.

I would have liked to have seen more of the old characters from the original series back in this book, it was great to see Val and Skulduggery again, but aside from China, everyone else seemed to be new. I missed the Dead Men, I missed Scapegrace and Thrasher, I missed Tanith, so I hope more of them will be back in future books, if Landy does in fact continue this as a series.

The representation in this book was definitely better than in the original Skulduggery Pleasant series, you have Never who is gender fluid, you have two new gay characters, and Val’s suffering from PTSD, I hope this trend continues into the next books.

There were a few digs at Donald Trump, in the form of Landy’s parody character Martin Flanery and whilst this was humourous, I didn’t quite see the point? Like this character added literally nothing to the plot.

I loved that Valkyrie has a dog, Xena seemed so cute and more books should have dogs!

It was nice to meet a good necromancer with Militsa, she was sweet and I hope to see her and Valkyrie’s friendship grow in the next books.

I wasn’t so keen about the whole remnant of Darquesse thing? I get that it’s meant to represent Valkyrie’s guilt and everything but there were a lot of hints throughout the book that Landy might be bringing her back and I hope that’s not true because her arc was pretty neatly tied up at the end of the original series.

It felt like the climax was somewhat rushed, but that could have been because of the slow pace of the start of the book. The last 10 or so chapters were definitely my favourites of the whole book, Val and Skulduggery get some great moments, some weird spoilery stuff goes down (I literally can’t say more than that, all I can say is that it’s some of the weirdest stuff Landy has ever written) and the action is thick and fast. There was a massive twist at the end which I did not see coming at all. Still everything resolved in a really satisfying way and the last chapter really felt like the start of a new era.

Overall, this was a decent start to a new era of Skulduggery, whilst the plot wasn’t the easiest to follow, I loved Valkyrie’s character arc, Skulduggery will never not be amazing and I enjoyed the new characters for the most part. I’m hoping that the plot will be more streamlined, in future books and we get to see more of our old favourites, assuming that there are more books, which it seems like there will be as the whole book feels like set up for more. I did feel like this book left me wanting more though? I seriously hope there is more to this new phase of Skulduggery because there are way too many loose ends not to be!

My next review will be of the latest book in Samantha Shannon’s Bone Season series, The Song Rising.