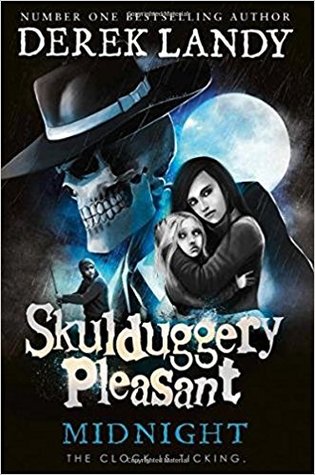 It’s no secret by now how much I love the Skulduggery Pleasant series, and the level of excitement I had for Phase 2 of the series was intense. I have to say though, it has yet to really hit its stride. Resurrection was mostly set up for the new series, which was to be expected, as the first book in this new phase of the series. Midnight is still on kind of shaky ground, I can see the potential for amazing books in the rest of the series, but there’s still some….well let’s call them teething issues to work through. First of all, the first and second halves of this book kind of felt like two different stories, which did make sense when I read the afterword, but I still kind of felt like they didn’t really fit together. For the first half, we have all these refugees coming from Mevolent’s world and the second half is all about Alice being kidnapped. Both are great plotlines on their own, but together? Yeah they don’t really work all that well. I think this second phase of the series is still finding its feet, and whilst I have high hopes for the rest of the series, this book wasn’t as good as I was hoping. Here is a short synopsis of the book:

Skulduggery Pleasant and Valkyrie Cain are back in their most gripping story yet, as book 11, Midnight, picks up where Resurrection left off – and runs.

For years, Valkyrie Cain has struggled to keep her loved ones safe from harm, plunging into battle — time and time again — by Skulduggery Pleasant’s side, and always emerging triumphant.

But now the very thing that Valkyrie fights for is in danger, as a ruthless killer snatches her little sister in order to lure Valkyrie into a final confrontation. With Skulduggery racing to catch up and young sorcerer Omen scrambling along behind, Valkyrie only has twelve hours to find Alice before it’s too late.
The clock is ticking…

First off I kind of have to talk about the pacing, because that was definitely the biggest issue in this book. The first half plods along at a rather leisurely pace and then the second half goes at breakneck speed, so fast that you don’t really have time to consider what’s going on. I’m not sure if I’ve ever said any of Derek Landy’s books have pacing issues before, but they were glaringly obvious in this book. Also as I talked about, the two halves didn’t really fit together very well, the first and second half felt like they were part of different stories, which did make sense when Derek Landy explained how much he’d had to chop and change Midnight after Resurrection’s publication in the afterword, but at the same time it was kind of jarring.

There were also way too many subplots in the first half of the book, between the refugees from Mavolent’s world, Abysinnia’s secret child, Sebastain the plague doctor, it was really hard to keep track of what was happening and it felt like some of the things were just there to set up for future books rather than actually adding anything to this particular story.

The chapters lengths were good though, the one thing Derek Landy always does well is keep the chapters to a relatively short length, honestly they were the saving grace with all the pacing problems in this book, I was still managing to get through the story despite the fact that I wasn’t totally engaged with what was going on because the chapters kept ticking along. The book itself however was definitely overly long given that the main part only really happened in the last 40 odd chapters of the book, the entire opening could probably have been cut without losing anything.

The Skulduggery/Valkyrie dynamic is the cornerstone of this series and they’re split apart for most of this book. I do love getting to see the character that Valkyrie has grown into because I like I said in my review for Resurrection, I like her a lot more now she’s grown up, she still has the sarcastic sense of humour which makes for such a great dynamic with Skulduggery, but she’s more mature, less certain, less arrogant now and that makes it much easier to root for her. Whilst Skulduggery and Valkyrie being apart does give Valkyrie the chance for lots of action hero moments of her own, it feels somewhat like the life of the series has been sucked out? The friendship between Val and Skulduggery added some warmth, light and humour to the series and that felt like it was lacking here. It also feels like Skulduggery has been somewhat pushed to the side, which was a shame given that he’s my favourite character.

It was lovely to see Skulduggery finally getting to meet Valkyrie’s family-it’s something I’ve been waiting for for a long time and it did not disappoint. Desmond in particular was ridiculously hilarious, asking lots of stupid questions about magic.

The Omen subplots were kind of dull, I enjoyed him in the last book, but in this book I didn’t really see much point to his character being there, because he just didn’t add anything to the story. I’m hoping that in the next book, he’s given more to do, because I do like him, I just didn’t think his character was actually needed in this particular book.

Valkyrie’s new sensitive powers are quite interesting and whilst I don’t love Derek Landy doing the whole “special snowflake, first of her kind” thing with her, I think there’s a lot of potential with these new powers and I can’t wait to see how she develops into these new powers-Valkyrie growing into her magic was one of the most interesting parts of phase 1 of the series, so it would be great to see something similar here.

I said I wasn’t keen about the remnant of Darquesse in the first book, but I actually enjoyed her more here, it’s an interesting dynamic she and Valkyrie have and whilst I still hope that Darquesse herself isn’t brought back fully, I think that having Kes around could be interesting for future instalments.

I didn’t really understand the point of Sebastian the plague doctor in this book, I’m hoping that his storyline gels more with the rest of the story in future books.

There were some good discussions of consent in this book, which was nice to see-it’s definitely something that needs to be talked about more in YA.

The Flanery subplots didn’t really fit well with the story either, again that made sense when I read the afterword, as Flanery was initially meant to have a much bigger role and was toned down after Trump was elected, but he’s still kind of annoying and I don’t really see his role in the story.

I think one of the major problems with this arc is that a compelling villain hasn’t really appeared yet. Flanery is simply a caricature, Cadaverous is slightly more menacing, but still not great and Abysinnia has yet to really do anything to cement her villain status. I’m slightly disappointed that Landy, who brought us Mevolent, Serpine, Lord Vile and Darquesse hasn’t been able to come up with a better villain for this series, but I’m willing to give Abysinnia the benefit of the doubt that we are building up to her really evil moment.

There were some big reveals at the end that gives me hope for the rest of the series, but at the moment, Phase 2 has definitely been lacking the same spark that Phase 1 had. The trademark Landy dialogue and humour is still there, but it feels like the story is lacking…..well apologies for a slightly spoiler here, but you won’t understand it till you read the book anyway, soul. I’m hoping that this is just teething problems and the books will get better from here on out, because I really don’t want this second era of Skulduggery Pleasant to ruin the first one for me!

BECHDEL TEST: PASS-Valkyrie has several conversations with other female characters (Reverie, Militsa, China, Hannah) that do not revolve around men.

My next review will be of Night of Cake and Puppets, the Daughter of Smoke and Bone novella, which will be coming for you very soon as I have already finished it!