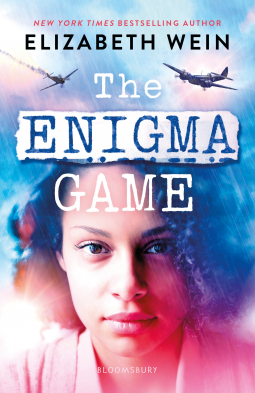 BECHDEL TEST: PASS-Louisa and Ellen and Louisa and Elisabeth both have conversations which don’t revolve around men.

Thank you to Bloomsbury UK and Netgalley for allowing me to read this book. This in no way impacted my opinion of the book.

Ever since I read Code Name Verity way back in 2016, whenever I’ve found an Elizabeth Wein book I’ve jumped on the chance to read it. Naturally when I saw The Enigma Game on Netgalley, I requested it immediately and was delighted to be approved. I actually didn’t twig that it was connected to Code Name Verity (despite Jamie and Ellen’s names both being in the synopsis) so I was thrilled to discover that it was. I can’t say that this book had the same emotional kick as Code Name Verity or Rose Under Fire (though it certainly had its moments) but it was a nice addition to the stories in this world and it was great to see what Jamie, Ellen and Louisa got up to during the war. Here is a short synopsis of the book:

When her mother is killed in the Blitz, and her father’s ship goes down, Louisa Adair feels she has lost everything. The country she has called home since her family left Jamaica is not a friendly place for an orphaned girl with brown skin, and she badly needs money and a roof over her head.

Finally she finds work looking after an old lady at a pub near an airfield in Scotland. There she meets Ellen, a driver for the RAF, and Jamie, a pilot – two other young people just as exhausted by the toll the war has taken on their loved ones, and just as desperate for a way to fight back.

Then the impossible happens. A German defector lands at the airfield carrying a precious package, and Louisa, Jamie and Ellen find themselves hiding a codebreaking machine that could alter the course of the war. But there are powerful people hunting for the machine, and soon Louisa and her friends are playing a deadly game that threatens everything they hold dear.

I’ll start with what I loved about this book: the characters. Ellen and Jamie, we are already familiar with from The Pearl Thief and Code Name Verity respectively, and Louisa is a new addition. It was really nice to get to learn more about both Ellen and Jamie in this book, as neither are POV characters in the other Wein books they’re in, so it was lovely to get to spend more time with them and to see them developed more. Louisa was also a really nice addition, she’s smart and feisty and just wants to contribute something to the war. The dynamic between the three of them is great and really makes the story.

I will admit, this book is quite slow paced. It took a while for me to really get into it, not helped by the often lengthy chapters, as the plot only really picks up once the Enigma machine is discovered. It also didn’t help that the “chapters” weren’t really designated, often one POV could end on the same page as another started which made it hard to know where to lead off. The writing style was very engaging though, which helped mitigate some of the other issues I had.

I loved how much this book focused on friendship! There’s no romance in this at all, and it was so refreshing to see, these characters are just really close friends and it’s great to see how the difficult situation they find themselves in reinforces the bond between them. Louisa and Ellen had a particularly interesting friendship, as both are considered outsiders in their society (Louisa as a biracial girl, Ellen as a Traveller) and exploring their different experiences with discrimination with Ellen being able to hide her background due to her white privilege whilst Louisa obviously cannot do the same.

The friendship between Louisa and Jane though was definitely the standout in this book. I don’t think I’ve ever really seen a book that focuses on the relationship between an old woman and a young girl where the pair aren’t related? Anyway, it was really heartwarming to see how the two of them bonded over the course of the book and it was lovely to see an older person playing an important role in the plot, as again, that’s something you don’t see often. I would totally read a whole book about Jane, you get the sense she’s had quite the interesting life and she’s surprisingly funny!

I’ll be honest, I was actually quite shocked with what happened to Jamie, even though it is mentioned in Code Name Verity, because it’s been so long since I read it that I completely forgot!

The book is related to Code Name Verity, but it does largely stand alone and doesn’t assume knowledge on part of the reader, so you could read it without reading Code Name Verity first, as chronologically, the events of this book happen before Code Name Verity (this being set in 1940/41, and that book being set in 1943). However, I would recommend reading Verity and The Pearl Thief before this one as I reckon you will get more out of it if you’ve already familiarised yourself with Jamie and Ellen.

I loved the setting, the little village pub in the north of Scotland, it’s very atmospheric and I thought the wishing coins left by pilots in the beam above the bar was a really nice touch (even moreso when I read the author’s note and learned it was inspired by a real place)!

There are both POC and LGBTQ+ characters in here, which is always nice to see in historical novels. I thought Wein tackled the racism that Louisa faced well, especially with the scene on the bus where a child mistook her for German.

It’s not the most action packed book, it’s more intrigue and espionage in this book than anything else, but we do get some pretty exciting air battles.

It was a lovely surprise to see a favourite character from Code Name Verity returning too, though I can’t say who as it would be a massive spoiler.

The book actually ended up being more heartbreaking than I was expecting, but obviously, the characters are going through a war and I probably shouldn’t have been so surprised by some of the events.

The author’s note at the end was really interesting, it was great to learn about some of the real history that inspired events and settings of the book (though I would say it was a tad long!).

Overall this was a really nice addition to the Code Name Verity world and whilst I wouldn’t call it as impactful as either CNV or Rose Under Fire, it was great to see what both Jamie and Ellen got up to during the war and I loved Louisa. If Wein does more in this world, and I really hope she does, I would love to see what Louisa got up to after the events of this book as it left her in a really interesting place!

My next review will be of V.E. Schwab’s middle grade debut, City of Ghosts.