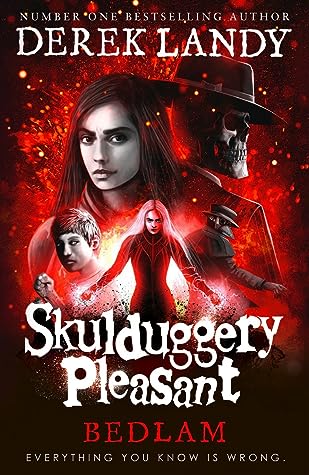 Bechdel Test: PASS-Valkyrie has several conversations with China, Tanith and Kes that are not about men.

I actually don’t have many books to read to prep for YALC this year, as there are very few authors I want to see, but this was one of them. I went to a signing with Derek back at the beginning of June and said that it usually took me two weeks to finish his books, which in fairness, it did, I started this one on the 13th June and finished it on the 27th! I have to admit, it’s taken a while for the latest phase of Skulduggery Pleasant books to really settle in for me, the first two books were very so-so for me, they didn’t feel much like the first phase of the series, but this book feels like a return to form for Derek Landy, now that the messy set up phase of this half of the series is over, we can dive back in at full speed ahead with many exciting reveals that I can’t wait for the rest of the series to explore. Here is a short synopsis of the book:

The 12th explosive novel in the internationally bestselling Skulduggery Pleasant series, BEDLAM will blow your mind – and change everything…

On a desperate journey to recover her sister’s lost soul, Valkyrie Cain goes up against the High Sanctuary itself, and there’s nothing Skulduggery Pleasant can do to stop her.

With Abyssinia’s grand plan about to kick off in a night of magic, terror, and bloodshed, it falls to Omen Darkly to save the lives of thousands of innocent people.

And as the madness unfolds around him, as hidden enemies step into the light, and as Valkyrie is sucked into a desperate, lawless quest of her own, he has no choice but to become the hero he never really wanted to be — or die in the attempt.

So this book marks the end of the Abyssinia arc, as it seems this series will follow the same pattern of a mini arc per trilogy of books and I have to say, I’m not all that sorry to see the back of Abyssinia. This book couldn’t decide whether Val and Skulduggery were meant to be helping Abyssinia or fighting her and honestly, I just still don’t find her a convincing villain, I’m far more intrigued as to what Crepuscular might do, as we don’t quite know what his motives are yet and he seems to have more potential as a villain. It’s a shame because I feel like Abyssinia could have had potential, but Landy just couldn’t decide what to do with her.

The pacing was much better in this one than in Midnight, I will say that I did still find elements confusing, there’s a lot of switching between different character POVs and a lot of different plotlines, but overall, the plot felt far more coherent in this one than it did in Midnight and despite being a much longer book, the pacing was far better, though it probably still could have used a bit being trimmed of the page length! The chapters were also a nice length as well, I love that Derek Landy tends to stick to quite short chapters as that’s what I tend to prefer! The ending chapters in particular felt incredibly rushed and I wasn’t entirely sure what was going on.

I appreciate that Derek Landy is making an attempt to make this phase of the series more diverse than the last phase, with success more in some areas than others. The mental health representation with Valkyrie is wonderful, her PTSD definitely isn’t glossed over and it’s something that she acknowledges that she needs help with, which I hope we get to see in later books.

The LGBTQ+ rep is decent and the conversations Val has about her sexuality felt realistic, and I really enjoyed her coming out to her parents. I will say that there were some phrasings that I felt were ill advised (particularly a bit where one of the characters says “all sorcerers turn bi eventually”) and could potentially have used some sensitivity reading? I don’t know if this book had sensitivity readers or not, but there were a couple of sentences about LGBTQ+ people that made me a little uncomfortable (bear in mind that I am an allocishet woman so I don’t know if what made me feel uncomfortable would be the same for LGBTQ+ readers, I just wanted to point it out in case it did) and could have used some tweaking.

I’ll be honest, I didn’t actually realise that Miltisa and Val were dating before this book, it came off as kind of sudden for me. I mean I’m happy because I think Miltisa is great and there were definitely hints of the two getting closer in the first two books, but I just think the transition to them being girlfriends could have been handled a little less clunkily?

It was nice to see Skulduggery and Valkyrie somewhat back to their old partnership in this book. There’s still some awkwardness and it’s clear that they’re still learning to be around each other again, after a while away, but their classic banter comes more to the fore in this book, which was lovely to see, the humour in this book felt much more akin to phase one that the previous two, which I loved. I will say that Skulduggery still seems to be being under-utilised in this series, and I hope we get to see more of him in the next book.

I still don’t really understand the point of Flanery, I don’t think that this series needed a Trump-a-like, and although his storyline serves more of a purpose in this book than it has done previously, I still feel like he’s not really needed? I’m only really interested in Flanery in terms of what Crepuscular is using him for as I feel like there’s still a greater story to be explored there. I also don’t really get the whole point of the Sebastian finding Darquesse plot is because I don’t feel that she needs to come back and of all the plots in this book, that one is the one that really doesn’t fit and I think the book would have been stronger without it.

I liked Omen’s plotline a lot more in this book than I have in the previous two, his storyline felt more tied into the narrative this time than it has done in the past and I feel like he became much more a part of the team in this book which I liked. It is nice to have a sorcerer in these books that’s just kind of average, rather than super-powered as so many of the others seem to be. He has quite an awkward relationship with both Val and Skulduggery, which is quite humourous and he and Skulduggery have a particularly great conversation in this which shows some potential for mentorship later on in the series.

It was really great to see Tanith back, Val doesn’t have all that many female friends, so it’s nice to see her interact with other women and I definitely think her, Tanith and Militsa have the potential to be a great group from their few interactions in this book.

The actual asylum portions of the book that the book gets it’s title from were incredibly difficult to read. I get the point of showing Val’s increasing guilt, but I’m not sure that asylum was the way to do that, having her confronted by the ghosts of people whose deaths she feels responsible for is a good idea, but I don’t think it needed to take place in the asylum setting. I also didn’t like some of the weird formatting that crept into these chapters.

Val’s new skills are interesting but I feel like it’s getting kind of overkill, she can see auras, throw lightning, heal herself, manipulate auras, the list goes on and whilst it’s cool that she can do all of these things, I feel like it makes it too easy sometimes, like whatever tough spot she’s in, oh it’s cool, she has the exact right power to get out of it? It is explained in the book why (though I can’t say due to spoilery reasons) and it makes sense, but making her have so many different types of powers, just seems like a lazy fix to get her out of whatever dangerous situation she’s been thrown in and I kind of preferred it in the first phase of the series, when she didn’t always have the exact right skills for the situation.

There are A LOT of great reveals in this book that could make for some really interesting plots in future books, most of which I can’t talk about because SPOILERS, but for the first time, I’m feeling really excited about what’s going to happen in the next book, especially because the spark from Phase One seems to have finally returned.

Overall, I really enjoyed this book, it felt like a return to form for Skulduggery and co., with lots of exciting adventures, interesting reveals and great character development for both old and new characters and I really think the next couple of books could be absolute standouts taking the plot from this one forward….if they’re done well that is.

My next review will probably be an e-ARC review, of Ever Alice, by HJ Ramsay which will be around the book’s publication at the end of July.