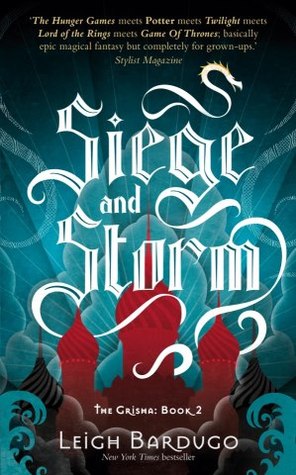 Bechdel Test: Pass-Alina and Tamar have a conversation that doesn’t revolve around men.

My first read of 2019 (since all the reviews I’ve done so far this year were hangovers from 2018) was Siege and Storm, the second book in the Grisha trilogy, in a nice bit of symmetry from last year, where Shadow and Bone was the first book I read in 2018. I was a little bit unsure about completing this trilogy, since I wasn’t overly keen on the first book, but since I really want to read King of Scars and was told I’d find it difficult to understand without the original trilogy, I decided to finish the first two books this January so I would understand what was going on when it came to King of Scars. Thankfully I did enjoy Siege and Storm more than Shadow and Bone, the introduction of new characters, particularly Nikolai, made it far more captivating, and the plot had a lot more substance to it than Shadow and Bone (though it still felt a little padded at 370+ pages). Here is a short synopsis of the book:

Darkness never dies. Alina and Mal are on the run. Hunted and haunted, but together at last, they can’t outrun Alina’s past or her destiny forever. The Darkling has emerged from the Shadow Fold with a terrifying new power and he needs Alina to realise his dangerous plan. There are others who would like to use Alina’s gift too. And as her power grows, somehow, she must choose between her country, her power, and her love – or risk losing everything to the oncoming storm. Glorious. Epic. Irresistible. Romance. Perfect for fans of Kristin Cashore and Laini Taylor.

I have to admit, I still had some of the same issues with this book as I did with the first, particularly in regards to pacing. The chapters were once again overly long, and it still felt like the book was longer than it really needed to be, though there was more action spaced throughout the book this time rather than all in a big chunk at the end, and the final battle was epic, so I did appreciate that.

I loved all the new characters introduced, especially Nikolai. NIKOLAI. I had been waiting for ages to meet Nikolai, because I initially read the Shadow and Bone trilogy because my friend told me how much she loved Nikolai and I have to say, I finally realise what all the fuss was about. Nikolai was everything I wanted him to be, sassy, clever, incredibly cunning and honestly I just love him so much, I cannot wait for King of Scars even more now.

I wasn’t that keen on Alina in the first book, but I have to admit, I enjoyed her more in this one. I don’t know whether Nikolai had just rubbed off on her, but she seemed to have developed a sense of humour in this book! I also liked seeing her embrace her power and toy with the line of darkness a little bit more. I was unsure about her taking on the role of leading the Grisha at first, but she grew into it and by the end I was enjoying seeing her take charge. I would like it if she didn’t have three potential love interests because I am seriously done with the all the guys are in love with this one girl trope, but I guess you can’t have everything.

I really hated Mal in this book, he was kind of insufferable! All he really seems to do is moan and be grumpy and whilst he has perfectly good reasons for being so, I just didn’t really enjoy reading about it. I still don’t really see the chemistry between Mal and Alina, honestly I saw more chemistry between her and Nikolai!

This book was a lot more funny than the last one, courtesy of Nikolai and Alina’s new found sense of humour and I appreciated that, because SHIT GETS REAL, in this book, so it was nice to have that added bit of humour to break up the sadness/darkness.

I’m still not entirely sure about the Darkling, I don’t quite get what everyone loves about him. He’s still kind of an enigma and comes across as kind of one dimensional to me, we don’t really know anything about his motivations, so he kind of just shows up, is evil and goes away again. I appreciate that he’s powerful and that alone makes him quite an intimidating villain, but I still wish we knew more about him because he still doesn’t feel entirely fully drawn to me. I also don’t really get why people ship him with Alina, he basically gaslights her through the entire book and that’s just…..not healthy.

I felt really bad for what The Darkling did to Genya and I hope that she and Alina are together more in the next book, because Alina really needs some more girl friends!

The stakes are finally feeling higher in this book, which was great, our main protagonists finally have a goal to work towards, and this book always feels like it is working towards that purpose which made the plot feel a lot tighter than in the first one which is good.

I still think Leigh Bardugo’s writing in Six of Crows and Crooked Kingdom is better than here, but I can’t deny that she definitely improved between Siege and Storm and Shadow and Bone and I found this book a lot more entertaining and easier to read.

The final few chapters were just amazing, Leigh really knocked it out of the park with the ending and really made me glad that I had Ruin and Rising on hand to read next, so I could immediately find out what happened after.

Overall, Siege and Storm was a vast improvement on Shadow and Bone, the plot was tighter, the writing was better, I finally got to meet Nikolai and it finally feels like there are real stakes in this world. I’m looking forward to seeing how Ruin and Rising wraps up the trilogy.

My next review will be of the final book in this trilogy, Ruin and Rising, although I don’t know when it will be up as I’m still not particularly far through it.