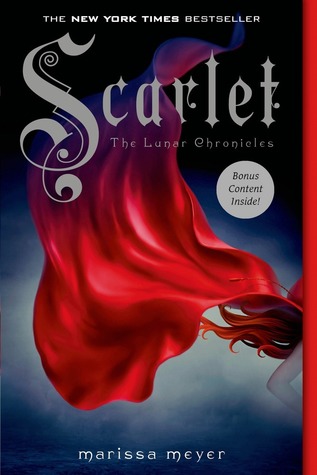 I wasn’t so keen on Cinder, the first book in Marissa Meyer’s Lunar Chronicles series when I read it last year, but I was told by basically everyone in the blogosphere that the second book in the series was much better and that I should keep going with it, so I put it on one of my #RockMyTBR polls for 2017 and Book Twitter decreed that I should read it, so there you go. I genuinely did like this one better than Cinder, I’m still not sure that this will become a favourite anytime soon and I don’t think I’ll be rushing to read Cress, but I did enjoy this one more than I thought I was going to, so I count that as a win. Here is a short synopsis of the book:

Cinder is back and trying to break out of prison—even though she’ll be the Commonwealth’s most wanted fugitive if she does—in this second installment from Marissa Meyer.

Halfway around the world, Scarlet Benoit’s grandmother is missing. It turns out there are many things Scarlet doesn’t know about her grandmother, or the grave danger she has lived in her whole life. When Scarlet encounters Wolf, a street fighter who may have information as to her grandmother’s whereabouts, she is loath to trust this stranger, but is inexplicably drawn to him, and he to her. As Scarlet and Wolf unravel one mystery, they encounter another when they meet Cinder. Now, all of them must stay one step ahead of the vicious Lunar Queen Levana.

Scarlet was a great addition to the cast of characters introduced in this book and I think a lot of the fact that I enjoyed this book more than Cinder was that I found her more interesting than I did Cinder. Cinder just felt bland to me whereas with Scarlet, her personality really shone through, she was this fierce teen who really loves her grandmother and will do anything to find her and the fact that I liked Scarlet actually meant I was more invested in Cinder’s story in this one because they were tied together. I also really loved Captain Carswell Thorne, another new addition to the cast of characters in this one. He was so charming and funny and I smiled every time he was on the page, he definitely made this book a much more fun read for me than Cinder was. I actually enjoyed him and Cinder together a lot more than her and Kai, not necessarily in a romantic sense, but they just seemed to have more banter and he brought her out of her shell, she didn’t seem quite as bland with him as she did with Kai.

Wolf, I’m not entirely sure about. He kind of fills the role of mysterious bad boy and you never really get to know enough about him to make a judgement on whether you like him or not. I did however appreciate the relationship between Scarlet and Wolf way more than I did the one between Cinder and Kai in Cinder, the chemistry was definitely far more there and that meant that the twists later on in the book had far more impact. Still, I’d like to maybe get to learn a little bit more about Wolf if I read the next book.

I wasn’t really sure about Kai’s role in this book? I mean he was there, he was doing stuff but to be honest, I don’t think I would have missed him if he wasn’t there, I still find him pretty bland!

I thought the fairytale aspects were better utilised in this book, whereas in Cinder it felt like Meyer just lifted everything and adjusted it slightly, in this book, it didn’t feel like Meyer was using absolutely everything from the story of Little Red Riding Hood, she took aspects and twisted them in a way that worked really well for the story.

I still really love Iko (my fave character from Cinder) and her being a ship in this one really made me laugh!

It was a little strange in the beginning when we jumped straight into Scarlet’s story, when we had left off with Cinder’s in the previous book, and it did take a while for the two separate stories to actually intertwine, so for a while it felt like you were reading two different books, but once Cinder and Thorne and Scarlet and Wolf’s stories did come together, they came together beautifully.

I would have liked to maybe see a little bit more of Scarlet and her grandma together, I mean we get through Scarlet that they were close but we don’t really get to see it very much, which is a shame because grandparent/grandchild relationships are incredibly rare in YA.

There were definitely a lot more twists and a lot more action in this one which I appreciated, though I had kind of worked out the twist involving Wolf quite early on in the book, there were still several other exciting things that happened that I didn’t see coming.

I still would have like a little more world building, I mean we get a pretty good idea of the structure of society on Lunar, but even in a different part of Meyer’s futuristic world, we still don’t get much of an idea of what this futuristic France looks like and I still feel that smushing the entire world into six countries is ridiculous. It also seemed weird that not one person is mentioned speaking French this entire book, given that they are in France? I mean Scarlet calls her grandmother, “grand-mere” but that’s all. I mean I get that maybe we’re meant to interpret that she’s speaking French most of the time, but I still feel like a few more French words thrown in there would have been good.

I also still don’t feel like Queen Levana is a scary enough villain, she seems incredibly detached from her supposedly “villainous actions” and I don’t know, I think the fact that we don’t really know anything about her motivations makes her seem like just this bland cookie cutter villain. I liked that this book explored more of Lunar society, the whole LSOP thing was really interesting and I hope we get to see more stuff like that in future books.

Overall, this book definitely upped the ante from Cinder, it was faster paced, more intriguing with excellent new additions to the cast of characters in the form of Scarlet and Thorne. I’m still undecided as to whether I will read the third book, Scarlet doesn’t end on such a cliffhanger that I’m dying to pick up Cress right away, so if I do read the third book, it might be a while. Still I am glad to say I enjoyed the second book much more than the first.

My next review will be of Tara Sim’s Chainbreaker, an e-ARC I read in December, as the publication date for that one is tomorrow!