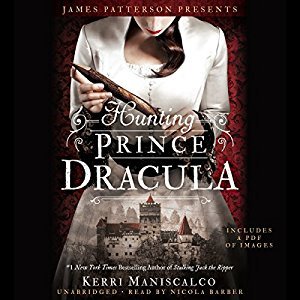 BECHDEL TEST: Honestly unsure, I find it hard to pick out Bechdel passing content in audiobooks because I get too engrossed in listening!

I read Stalking Jack The Ripper back in September of last year, as part of my 2019 #RockMyTBR challenge and I really enjoyed it but as the books aren’t published in the UK (I found the first one in Foyles as they get some American releases), I tried the second one on audio and I’m glad I did because the narrator really made this book for me! I didn’t enjoy it quite as much as the first one as I found the mystery kind of convoluted, but it was still a pretty good book. Here is a short synopsis of it:

In this sequel to Kerri Maniscalco’s Stalking Jack the Ripper, bizarre murders are discovered in the castle of Prince Vlad the Impaler, otherwise known as Dracula. Could it be a copycat killer…or has the depraved prince been brought back to life?

Following the grief and horror of her discovery of Jack the Ripper’s true identity, Audrey Rose Wadsworth has no choice but to flee London and its memories. Together with the arrogant yet charming Thomas Cresswell, she journeys to the dark heart of Romania, home to one of Europe’s best schools of forensic medicine…and to another notorious killer, Vlad the Impaler, whose thirst for blood became legend.

But her life’s dream is soon tainted by blood-soaked discoveries in the halls of the school’s forbidding castle, and Audrey Rose is compelled to investigate the strangely familiar murders. What she finds brings all her terrifying fears to life once again.

As I said at the top of this review, I really enjoyed the narrator for the audiobook, Nicola Barber was brilliant, she was great at the accents (I’m pretty sure her accent for Thomas was half the reason why I liked him more here) and she was really good at conveying the atmosphere for the story. If you like audio, then I definitely recommend trying this series in that format, because the narration was great.

Thomas and Audrey kind of switched places for me in this book in terms of who irritated me more. I totally get why Audrey was stressing about losing her autonomy and wanting to be independent and do things on her own, but she takes a lot of stupid risks because of this and her constant whining about it kind of irritated me. Don’t get me wrong, I still had a lot of admiration for her and her refusal to put up with sexism, and obviously all I liked about her in the first book was still there, I just found that more about her irritated me this time around.

Thomas meanwhile, kind of grew on me this book. I don’t know how much of this was to do with me really liking the accent that the narrator did for him, but I felt like the charm that the author was trying to convey in the first book, came across way better for me in the audio. I don’t think he was in any way malicious by offering to take Audrey home when she looked like she was suffering though I can understand why Audrey was annoyed at him telling her professors that she was “delicate”. Still, I felt like he was less of a jerk in this book, and though I could see where Audrey was coming from, it did feel like she overreacted slightly (though his prank on Audrey Rose in the morgue was seriously messed up).

The setting in this was amazing, the creepy old castle with all the secret tunnels? It’s the perfect horror/mystery novel setting and Mansicalco describes it so well, it really adds to the atmosphere of the book.

I liked the writing in this book for the atmosphere it provided, but I did feel like Audrey’s inner monologue got somewhat repetitive and I hated every time she reminded us about her “virtue”. I get that this is a Victorian set book, and girls would genuinely be worried about that, I just kind of found myself rolling my eyes every time she mentioned that anything would scandalise her “reputation”.

I liked that there were more women in this book, I mean don’t get me wrong, it’s still overwhelmingly dominated by men, but here you have Anastasia, Ileana and Daciana as well as Audrey and they all play a major role in the plot. It was nice to see Audrey looking to other women for advice and forming bonds with them, as the first book definitely lacked this.

I found the angst between Audrey Rose and Thomas, kind of infuriating, most of the book, there’s this angsty back and forth between them, basically Audrey thinks Thomas doesn’t respect her independence, and Thomas, though well-intentioned and wanting to help, kind of puts his foot in it a lot. Honestly, so many of their problems could be solved by COMMUNICATION, which hurrah when they finally did, but it took far too long.

The story was a little slow paced, it took a long time for the mystery to unfold, it took a few chapters before it was even really introduced, and then it just unravels at such a slow pace through the book, some chapters don’t even seem to further anything. It definitely could have been a shorter book, I reckon had about a hundred or so pages of this been cut, it would have been a much tighter mystery.

I did feel like Audrey had slight “Not Like Other Girls” syndrome, she’s constantly reminding us how restricted she feels in corsets and how she likes wearing her breaches and how unusual it is for women to be doing forensics. Like we get it, you’re maybe slightly ahead of your time, but I don’t need to be reminded for the entire book!

I still can’t say I’m massively interested in Audrey and Thomas’ romance, other than my obvious issues with the angst in this book, I’m still not really feeling the connection between them though I don’t know how much of that is just my natural cynicism. I mean I don’t think they make a bad couple, I just wasn’t fully invested in their romance.

I thought the contest between the students for the places at the forensic academy was going to play more of a role in the book, like one of the students was taking out the rest of the competition, but it kind of seemed like more of an afterthought.

A lot of the side characters were really underdeveloped, I mean I get it because it’s in first person POV and the cast of side characters changes in each book, but I still would have liked some of the other students and staff at the school to be a bit more fleshed out.

I liked the inclusion of Romanian folklore and culture, I thought that was done really well, and seemed respectful to the culture, though I’m not Romanian, so I obviously can’t say that for sure!

The mystery itself was a bit convoluted to me, though the culprit wasn’t as obvious as in the last book, the resolution didn’t feel earned, like it didn’t feel like there were loads of clues pointing toward that particular character, but maybe that was just me not picking up on them! The motive was a bit messy for me and I also felt like the entire ending was kind of rushed? The last few chapters for me just felt really short and kind of choppy, so the ending was almost abrupt. I think had the pacing been better throughout the book, perhaps the ending would have felt quite so rushed. I did enjoy the epilogue though, I thought that was sweet.

Overall, I liked this book well enough, but I thought the central mystery this time was somewhat overcomplicated and all of the internal angst between Thomas and Audrey Rose was quite irritating, though I did really love the narration and will definitely be continuing this series in audio format.

My next review will be of Malorie Blackman’s Crossfire, but after today, I likely won’t have anymore reviews for you till I’m back from Cape Town in April, beware, there’s going to be a massive bombardment of everything I read whilst I’m out there after I come back!