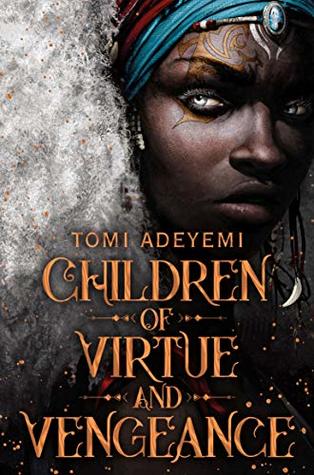 Book: Children of Virtue and Vengeance (Legacy of Orisha #2)

BECHDEL TEST: PASS: Zelie and Amari talk about magic whilst they are training.

It’s been almost two years since I read Children of Blood and Bone, so I have to admit, going into this that there were definitely things I had forgotten from the first book, though I don’t know how much that impacted my thoughts on this one! Anyway, almost two years on from a book that you really loved, you’re bound to have high expectations, Children of Blood and Bone was one of my favourite books of 2018 and I was massively excited for the sequel. Sadly, it didn’t live up to the high expectations I had from the first book: I don’t know if the long wait contributed to that, but it definitely felt like this book suffered from middle book syndrome. It felt like this book was just going around in circles, it couldn’t quite decide where it wanted to go and much of the character development from the first book was reversed. Here is a short synopsis of the book:

After battling the impossible, Zélie and Amari have finally succeeded in bringing magic back to the land of Orïsha. But the ritual was more powerful than they could’ve imagined, reigniting the powers of not only the maji, but of nobles with magic ancestry, too.

Now, Zélie struggles to unite the maji in an Orïsha where the enemy is just as powerful as they are. But when the monarchy and military unite to keep control of Orïsha, Zélie must fight to secure Amari’s right to the throne and protect the new maji from the monarchy’s wrath.

With civil war looming on the horizon, Zélie finds herself at a breaking point: she must discover a way to bring the kingdom together or watch as Orïsha tears itself apart.

Children of Virtue and Vengeance is the stunning sequel to Tomi Adeyemi’s New York Times bestselling debut Children of Blood and Bone, the first title in her Legacy of Orïsha trilogy.

I’ll start with my biggest issue in this book, which was the characters. THEY FRUSTRATED THE HELL OUT OF ME and any development that they had over the course of the first book was completely erased.

Amari, who went on this amazing journey in the first book, seemed to really backslide in this one. I could understand her being more trusting of her brother than Zelie, but she definitely came across as overly naive. She also acted really out of character for a lot of the book: she shows a lot of disrespect for the Maji’s culture, perhaps not intentionally and she seems to have had a severe personality shift as she aims to win the war no matter the consequences. I honestly don’t see how she can be redeemed for her actions towards the end of this book, and it really jarred with her character because the Amari from the first book was kind and caring and just wanted to make things better and in this book, no matter how well meaning she might have been initially, she just comes across as power hungry by the end. She’s convinced that her ideas are the best and gets frustrated when the Maji won’t listen to her but she makes no real attempts to get to know them and their culture. It’s a shame because I really loved Amari in the first book, and I did feel for her at the beginning but she grated on me more and more as the book went on. I also didn’t really understand why she kept drawing on what her father would have thought, when she clearly wasn’t a massive fan of him and wanted to be a different kind of Queen.

Zelie, I also had similar issues with. I do understand that she was suffering from some PTSD after the death of her father, but she felt kind of stuck, like she hadn’t really developed from where she was in Children of Blood and Bone. She’s angry (which she has every right to be) but she’s also kind of self-obsessed with her own pain and refuses to acknowledge the pain others might be feeling. She’s also incredibly stubborn and her own desire for revenge overtakes listening to anyone who might have different ideas than she does. Objectively, I don’t think Zelie would make a good ruler and I don’t think she really wants to be either. She seems to have blinders on for most of this book, and it was incredibly frustrating watching her pursue paths that were unlikely to succeed and ignore any other suggestions just because they didn’t fit within her desire for revenge.

Tzain still feels utterly pointless. In this sequel where pretty much everyone has magic, the big brother who doesn’t seems pretty useless and he didn’t really add anything to the plot, other than to be a romantic interest for Amari. I also found it strange that Zelie never once acknowledged Tzain’s loss: they both lost their father and yet Tzain’s grief doesn’t get a look in? It seemed like a bit of an oversight to not even have a single conversation between the two of them about that.

Once again, the romance in this book feel flat for me. Tzain and Amari seemed to have absolutely no chemistry, and you can definitely tell that they were only originally paired up as they were the two with no magic. Roen and Zelie, whilst somewhat better than Inan and Zelie, definitely felt a lot like insta-love, I barely remembered them being into each other in the first book? Though I will admit that I barely remembered Roen from the first book.

I still don’t understand why Zelie and Amari can’t be a THING! They have so much more chemistry together than the other characters, and Amari even describes her as the “girl she loves”.  There is one lesbian couple in this, but it does still by and large feel like a very heteronormative world.

Pacing was also an issue in this one. The chapters are incredibly short, you jump very quickly from one to the next which means you’ve barely settled into one character’s POV before you’re shunted into another one. This meant it was quite difficult to keep track of who was narrating at which point without looking at the title headers. Despite the constant shifts however, the actual plot itself is relatively slow paced, they spend a whole lot of time planning for battles, which although necessary is not that interesting to read about! It’s also difficult to keep track of time in this book

The plot in this basically goes around in circles, and by the end, you’re not entirely sure that they’re much further ahead than when they were at the start. The entire structure of the book can basically be put like this: fight the monarchy, fail, fight them again and repeat till the end. The first book they had a clear goal, bring magic back which they did. This book, the goal is still simple but I think because this series is meant to be a trilogy, Adeyemi had to bring up all these stumbling blocks because “Defeat the monarchy” can’t be achieved as a goal till the end. I almost wonder if it might have been better if this series had been a duology and this book had been expanded, then perhaps the plot in this one might not have suffered so much? I’m not sure.

I still could have used a glossary to explain what some of the incantations meant, a lot of them seemed quite similar, so actually knowing what the English was would have helped me know what they were actually meant to do. Still, I did love that this book had more magic in it and it was great to get to see what all the different types of Maji could do.

I did think that Queen Nehanda was a far more interesting villain than Saran, though I didn’t really understand her motivations? I mean King Saran’s family was killed by the Maji, so that makes sense why he would hate them, but she doesn’t really seem to have any motivation? I’d like to learn a bit more about her, though I doubt we will, since she isn’t a POV character.

The world building in this was still good, but I did have some quibbles about the magic, it seemed like the characters were simply able to do whatever magic they needed to when they needed it without any limits or restrictions. Even the limits on the moonstone seemed easily removed when it was necessary for the plot. The writing was still good, though there was a little too much repetition of certain words and phrases in places.

The epilogue for this was super confusing, where the last book ended off in a really exciting place, though this one is still a cliffhanger, I was more confused about what happened. I would have been okay if it had left off where it left at Chapter 90, the epilogue just got me more confused!

Overall, this book definitely suffered many of the classic problems facing second books in a trilogy, and whilst it was by no means a bad book, I definitely didn’t enjoy it as much as the first. I’m hoping that the third and final book of this trilogy will live up to the promise set by the first book, because this sequel definitely didn’t.

My next review will be of my May #RockMyTBR book, The Lady’s Guide To Petticoats and Piracy, by Mackenzi Lee, the second book in the Montague Siblings series.