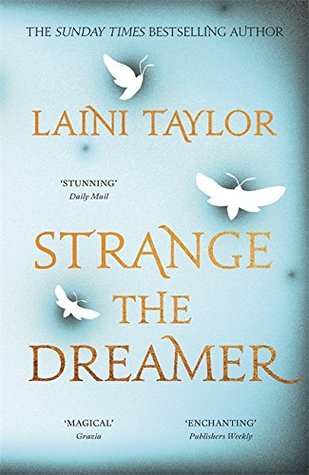 Bechdel Test: FAIL-All conversations between named female characters in this book tend to revolve around either Eril Fane or Lazlo.

Strange The Dreamer was my #RockMyTBR book for July this year, and after hearing both of my friends, Hannah and Nicola raving about it, I had really high hopes for loving it. Unfortunately it didn’t quite work out that way, I spent almost a month reading this book, partly because I’m working weird hours for my job and was often just too tired to read which definitely factored in, but also because the book was just very slow and kind of confusing, I didn’t understand what was going on half the time! I also thing the longer I spent with it, the less I cared, by the end I found myself just really wanting to get to the end and move onto another book rather than caring about what happened to the characters. Here is a short synopsis of the book:

THE DREAM CHOOSES THE DREAMER

Since he was five years old, Lazlo Strange has been obsessed with the mythical lost city of Weep, but it would take someone bolder than he to go in search of it. Then a stunning opporunity presents itself – in the person of a hero called the Godslayer and a band of legandary warriors – and he has to seize his chance or lose his dream forever.

I guess I should start with the pacing, since that was probably my biggest bugbear with this book: it is SO SLOW. Nothing happens for a good two hundred pages of the book, and even then, it’s still really slow. I understand that not all books can be non-stop action, and there’s nothing wrong with a slower paced book, but there has to be something happening to engage me and here there really wasn’t. I also found the plot really confusing and I wasn’t sure what was going on half the time, which didn’t really help. It’s the kind of book that you need a lot of focus and attention for and I just didn’t have that. The book was several hundred pages longer than it needed to be, and the fact the chapters were by and large overly long didn’t really help.

I do think Laini Taylor’s writing is beautiful, but it can be quite overwhelming? All of the dense prose doesn’t make it easy to engage with her books because half the time you’re trying to work out what she means!

I’ve found a particular problem with Laini Taylor’s books that I first noticed in the DoSAB series to a lesser extent but it’s also here to a greater extent: she uses rape as a plot device A LOT. So many of the characters in this book, in fact I think almost everyone, has either been raped or was the product of rape and it makes it seem normal, which really bothered me. Like rape already isn’t taken seriously enough in our own society, I don’t really want to see worlds in books where it’s seen as something totally normal. I’m obviously not saying that rape can’t be explored in books, I’ve read some really great books that have, but I do think it needs to be treated seriously, and delicately and I don’t think this book did that.

A lot of the big plot twists were really easy to work out, one is revealed in the prologue which I somehow totally missed (I told you that you needed to pay attention) and one is just so darn freaking obvious that it doesn’t really deserve to be called a twist because it is so heavily hinted at throughout the book.

The world building was okay, but I wanted MORE. We get the basics of how Weep came to be how it was at the beginning of the book and about the Mesarthim but I felt like quite a lot was left out, like why did the Gods need so many babies in the first place?  I thought the Godspawn powers were really cool but I wish we’d seen more of how those powers were decided, after all, the powers don’t manifest themselves in quite the same way in the kids as they did in the Gods and I wanted to know why that was. Basically I wanted way more information than I got.

There was WAY TOO MUCH focus on the romance at the detriment of other things (character development, world-building, you know, small stuff like that). I didn’t feel that much chemistry between Sarai and Lazlo, for one thing THEY MEET IN DREAMS, NOT IN PERSON, how can you know you love someone that you haven’t in reality actually met? It was way too much insta-love and I just didn’t feel like I could root for the two of them together, because their romance felt so clunkily done.

Which brings me onto my next point: characters. I didn’t feel like I could connect to any of the characters. Lazlo was nice enough, but he felt kind of bland to me, and he wasn’t really an active participant in his own story, until right at the very end. Sarai also felt very passive, like she wasn’t really doing anything to drive the story forward. The others just felt like they weren’t fleshed out enough for me to really care about, which was a shame because I definitely think there were side characters that could have been interesting, like Nero, and the other Godspawn, but they just weren’t given anything more than one dimensional characteristics. I also thought Minya had the potential to be really interesting but her cruelty wasn’t really explored enough.

I also felt like this book was very similar to Daughter of Smoke and Bone? The whole war between humans and Gods, the orphan who doesn’t know where they came from and ends up being special? A relationship between different species? A lot of the things in this book felt very similar to Taylor’s previous works.

The ending was incredibly deus ex machina, and the whole “problem of Weep” that Lazlo spent the entire book trying to solve, was solved within like three chapters. Basically the book spends about 60 chapters doing nothing and then all the stuff actually happens in the last five or six. I also thought that what Lazlo did at the end was incredibly out of character, and if he loved Sarai, he never would have put her through that. I also felt like the ending was forced to make the book a duology when it didn’t need to be: it tells a pretty self contained story, there was no reason for this to be two books.

Overall, I was sorely disappointed in Strange The Dreamer. I was expecting to love it because I’d heard such good things, but it had very little plot, bland characters and didn’t live up to its potential. I don’t think I’ll be reading Muse of Nightmares, this book was such a struggle, I can’t imagine wanting to read another one.

My next review will either be of Libba Bray’s The Diviners, or VE Schwab’s Vengeful, depending on which I finish first.