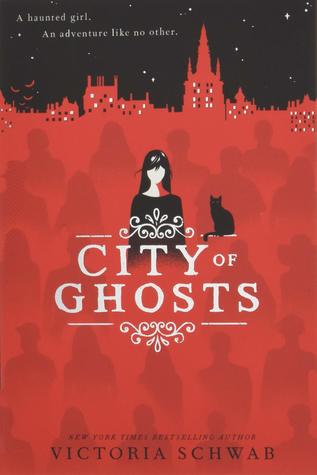 BECHDEL TEST: PASS-Lara and Cassidy talk about Harry Potter (the books in general, not the specific character!).

I was originally planning on reading this for my #RockMyTBR challenge this year, but it was chosen for me to read by my Goodreads book club this month, and since I’d already read my challenge book for this month, I swapped this book out for its sequel as my TBR challenge book. I have to admit, if this wasn’t written by Victoria Schwab, I doubt I would have read it as I don’t tend to read middle grade books all that often. Still, I’m glad I did, it was a lot of fun and a nice break from all the chunky fantasy that I tend to read, it’s been a while since I finished a book in 4 days! Here is a short synopsis of the book:

Cass can pull back the Veil that separates the living from the dead.

When Cass’s parents start hosting a TV show about the world’s most haunted places, the family heads off to Edinburgh. Here, graveyards, castles and secret passageways teem with restless phantoms.

But when Cass meets a girl who shares her “gift”, she realizes how much she still has to learn about the Veil—and herself. And she’ll have to learn fast. The city of ghosts is more dangerous than she ever imagined.

Like I said at the top of the review, one of the most appealing things about this book was the fact that it was short. Don’t get me wrong, I do enjoy dense fantasies packed with world building but they can get quite exhausting to read all the time, so it was nice to read something that both had reasonably short chapters, and wasn’t over 500 pages long! The writing style was also easy to read and engaging (whilst being very recognisably Schwab) which was great.

It’s interesting to see how authors who have previously done adult or YA transition over to middle grade and I felt Victoria Schwab did it very well. It was clearly written with a younger audience in mind, but it didn’t feel dumbed down at all and those who have read Schwab’s adult books will feel very familiar with the style here.

I loved the map at the beginning, and obviously as someone who studied in Scotland and is quite familiar with Edinburgh, it was really cool seeing Cass and her family go to all of these different places that I had been to in real life. It was a great setting for the book, and I think Victoria Schwab captured the sense of place very well, you can clearly tell how much she loves the city.

As for the characters, I did like them, though obviously as this is a book for younger readers, they perhaps weren’t as fleshed out as I would usually expect in a Victoria Schwab book. Cass felt younger to me than I think she was intended to be? Maybe it’s because Lara was meant to be around the same age and she just seemed older? I’m not sure, but had the book not mentioned her age, I would have pegged her at about 9 or 10 rather than 12. Jacob was adorable and quite amusing, though we don’t really learn a massive amount about him either.

I loved Cass and Jacob’s friendship, I will always love friendship centred novels and wish they were more common in YA and Adult, it was so nice to have a book with a platonic friendship between a boy and a girl without having any kind of romance (granted one was a ghost so that would have been an impossibility anyway, but still!). I’m a bit worried about the suggestion that Jacob might have ulterior motives though, I don’t want to see either of them get hurt! I also liked that despite the animosity at the beginning, Lara and Cassidy didn’t fall into the trap of hating each other for no real reason.

I’ve seen other reviews complain about Cassidy’s confusion at British words and the explanations of them, but honestly, I found it quite funny. I’ve just accepted that it’s more common for Brits to understand Americanisms than for them to understand British-isms, and since it’s a book for kids, I don’t mind as much as I would otherwise.

There’s also a fair amount of Harry Potter references, so if you’re not a Harry Potter lover, that might grate on your nerves, but personally I quite liked it. I was just as excited as Cass to go to the Elephant House!

It was a little slow to start off with, but it built nicely through the story and the climax was very exciting, so I wouldn’t say the slow pace is a problem for the whole book, more just the first and second parts (the book is split into 5 sections).

It’s obviously not massively scary, I would describe the feel of this book more as eerie than scary but it works well as a ghost story. The Raven In Red, who is the “main” ghost in this story, kind of feels like a dead Pied Piper of Hamelin, as she steals children’s lives and tempts them away with her voice. I wouldn’t say she feels massively threatening as a villain though!

The world building was decent, obviously a little more simplistic than in her other books (accounting for the younger audience) but we get a fair amount of detail on how Cass is able to go through the Veil & how ghosts can be sent on and I’m sure we’ll get more details in future books.

Cass’s parents are super oblivious for a pair who work in ghost hunting, I mean you get the sense that her mum might have some idea what’s going on, but they generally play the role of oblivious, though obviously caring parents who have absolutely no idea what’s going on with their daughter.

There are definitely similarities to Vicious that readers who have read both will pick up on, the near death experiences, the fact that Cass’s “death” is exactly the same as Sydney’s, it’s not like it’s an obvious copy, but there are some similar threads.

I was surprised that Cass didn’t look more into her abilities in the year since her accident, especially since she might have been able to find something in her parents’ research, but I suppose after a traumatic incident, your first thought probably isn’t “Oh how can I get rid of these ghosts”.

There was some decent humour in this, mostly coming from Jacob and his lack of wanting to go into scary situations!

I liked that this book wrapped up the story arc well, but with the obvious hint that there was going to be more. It feels very episodic which fits well with the fact that Cass’ parents are filming a TV show.

Overall, this was a fun little story, I don’t think it will ever be one of my favourites of Victoria Schwab’s books, but I enjoyed it well enough and I’m looking forward to reading about more of Cass’ adventures when I read Tunnel of Bones later in the year.

My next review will be of Susan Dennard’s Windwitch, which I’m hoping to get up at the beginning of next week, as it’s one I’ve already finished.