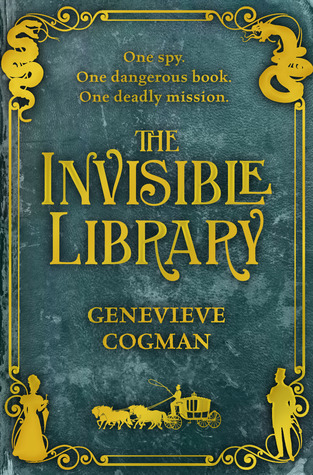 I came across this series actually via the third book in the series, which I thought sounded really interesting. It took me the longest time to find the first book, but naturally when I did, I was really excited because it sounded so good. I mean libraries, different realities, spies, I mean what about that does not sound awesome? Sadly the execution did not live up to the concept, I found myself bored, confused and wishing I hadn’t spent my money on it. Here is a short synopsis of the book:

The first installment of an adventure featuring stolen books, secret agents and forbidden societies – think Doctor Who with librarian spies!

Irene is a professional spy for the mysterious Library, which harvests fiction from different realities. And along with her enigmatic assistant Kai, she’s posted to an alternative London. Their mission – to retrieve a dangerous book. But when they arrive, it’s already been stolen. London’s underground factions seem prepared to fight to the very death to find her book.

Adding to the jeopardy, this world is chaos-infested – the laws of nature bent to allow supernatural creatures and unpredictable magic. Irene’s new assistant is also hiding secrets of his own.

Soon, she’s up to her eyebrows in a heady mix of danger, clues and secret societies. Yet failure is not an option – the nature of reality itself is at stake.

Sounds super cool right? Wrong. First of all, there are just way too many supernatural elements. I mean you had Fae, you had vampires, you had werewolves,  you had weird robotic creatures, you had dragons, it’s like the author took every supernatural element you could possibly have in a book and threw them all into this one. It would have been a lot simpler to follow if she had just stuck to one!

I loved the idea of the alternates, and the idea of the Library and that there were all these cool rare edition books out there that the Librarians needed to go and get, that was really cool. But the world building was all so complicated and confusing, that I just didn’t understand it at all. I still have no idea what Chaos is for example. I felt like Cogman was just introducing us to all these different things without ever actually explaining what any of them meant.

The characters are another area where this book fell flat. Irene was just completely bland, she seemed to have little to no personality, there was nothing about her that made me root for her, that made me interested in her. We have no indication of how old she’s supposed to be, so the little flirting that she does with her definitely teenage apprentice just seems weird. Speaking of said teenage apprentice, Kai had the potential to be an interesting character, he was cheeky and kind of mysterious and had an interesting backstory, I wished he had been allowed to shine more because he seemed like he would have been a much more interesting MC than the tepid Irene. All of the secondary characters fell kind of flat as well, there was little to no character development for any of them, they all just felt like bland stereotypes rather than real people, Bradamant was the classic mean girl, Vale was the detective & Kai was the usual brooding cute guy. If more time had been spent developing the characters and world then everything would have been so much better!

The Language (special language that only Librarians could use) sounded very cool, but again, it wasn’t explained very well.

There seemed to be indications of romance between Kai and Irene which is weird enough cause I’m pretty sure she was like hundreds of years old and he was a teenager, but these were dropped pretty fast in favour of a potential romance between Irene and Vale which is not developed well at all.

The chapters were way too long, and difficult to read as well because of the very stilted, confusingly phrased writing and so the story just felt like it was lagging to me, even when supposedly exciting things were happening in the story.

There were also way too many different enemies introduced, you have the Fae, the Iron Brotherhood, Wyndham, I didn’t even know who they were fighting against most of the time. And when Alberich, the main villain, was introduced, he fell kind of flat to me, he didn’t really seem like a terrifying villain at all.

I guess the book got kind of interesting at the end with the introduction of the story that was about Alberich and his possible sister and child but by that point it was too late, I was just relieved that the book was over (seriously, I’ve been reading this book off and on for three months. It took that long. It was only a 300+ page book).

Overall, this book had a good concept but it was poorly executed, lacking in basically everything, confusing plot, confusing world building and flat characters. I will definitely not be reading book two.

My next review will be of Salt To The Sea by Ruta Sepetys.