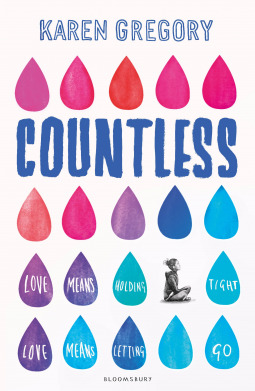 As always, thanks to Netgalley and Bloomsbury UK for allowing me to read this book.

I requested this book after a #ukyachat that focused on it, because it sounded interesting and different and I can honestly say I’ve never read a book that focused on a teenager with anorexia before, so I thought I’d give it a try. However, I quickly found that it wasn’t really my cup of tea. Whilst I appreciated the raw and honest depiction of Hedda’s eating disorder, I can’t deny that it made for rather difficult reading, and I don’t have an eating disorder, so I can imagine it might be triggering for those who do? Potentially something to consider before picking up this book. The book definitely lagged for me, it just felt very repetitive, particularly over the first two parts, and it wasn’t actually until closer to the end that I felt myself becoming engaged with the story. I mean, potentially it could have just been me, I’m not a huge lover of contemporaries anyway and always find them a bit slower than I’d prefer, Here is a short synopsis of the book:

‘Is there anything that’s concerning you?’ Felicity says. ‘College, home, boyfriends?’ Though she’s more or less smiling at this last one.

I don’t smile. Instead, I feel my face go hot. Silence stretches as wide as an ocean.
When I look up, Felicity has this expression on her face like she’s just seen Elvis. Slowly, she leans forward and in a gentle voice I’ve never heard her use before she says, ‘Have you done a pregnancy test?’

When Hedda discovers she is pregnant, she doesn’t believe she could ever look after a baby. The numbers just don’t add up. She is young, and still in the grip of an eating disorder that controls every aspect of how she goes about her daily life. She’s even given her eating disorder a name – Nia. But as the days tick by, Hedda comes to a decision: she and Nia will call a truce, just until the baby is born. 17 weeks, 119 days, 357 meals. She can do it, if she takes it one day at a time …

Heartbreaking and hopeful by turns, Karen Gregory’s debut novel is a story of love, heartache and human resilience. And how the things that matter most can’t be counted. Perfect for fans of Lisa Williamson, Non Pratt and Sarah Crossan.

I personally found it hard to connect to Hedda which is probably why I put this book down and didn’t feel the need to pick it back up for a while. I think it’s imperative in enjoying this book that you need to connect to Hedda because so much of it is just her thoughts and feelings and I just couldn’t connect? I felt like I was more engaged in what happened to her by the end, but for most of the book, I couldn’t connect to her. I did appreciate that she was a flawed character, she was selfish, she didn’t always get things right, she struggled, so in that respect, she did feel like a three dimensional character, she just wasn’t one that I could connect to!

At first I felt like her parents were awful, but I think it was just because we were seeing them through Hedda’s eyes and actually as the book went on, I came to feel sorry for them, because it was clear that they had struggled just as much as she had, particularly her mother, and I did appreciate that her parents played a role in the story as so often in YA, parents are completely absent. I also liked that Gregory showed the impact Hedda’s eating disorder had had on her family.

I liked the realism in this story, problems are portrayed in a very realistic way, Gregory didn’t shy away from talking about Hedda’s eating disorder, her experiences of units, her social workers, money problems, death etc and she did it all in a very realistic way which I appreciated. Hedda really struggled both with her eating disorder and becoming a mother and I liked that because it would have been all to easy for Gregory to just brush these things under the rug and have Hedda be completely cured and the perfect mother by the end of the story.

I loved that this book was set in the UK as so much of what I read is US-centric, so every once in a while, it’s nice to read stuff that’s set in my home country!

This book is definitely more of a character driven story than a plot driven one, aside from some major events, not all that much happens, it’s just the repetitive day-to-day of Hedda’s daily life, which for me as a plot driven reader was a bit of a problem, as I did find myself getting bored.

There is a little romance in the book, I can’t say I particularly cared for it as I didn’t really feel the chemistry between Hedda and Robin and thought they were better as friends. I did however appreciate that Robin was there for Hedda when she didn’t really seem to have anyone else and I also appreciated that Robin didn’t miraculously cure her eating disorder as I hate it when that happens. I also totally predicted the twist with Robin which made me very happy as that almost never happens to me!

I liked all the little pop culture references scattered throughout the book, they were used sparingly, but really well I thought.

The ending was realistic (ie not a HEA) but I liked that Gregory still made it hopeful.

Overall, this was a decent enough read, but I just don’t think it was particularly for me, if you like character driven YA contemporary with a focus on realistic mental illness though, I would definitely recommend it for you.

My next review will be of A Court of Mist and Fury which I just finished. Will hopefully be posting that very soon, so stay tuned!