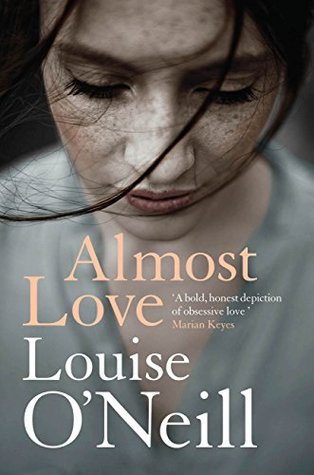 Thank you to Quercus Books and Netgalley for allowing me to read this book early, I really enjoyed (okay well enjoyed is the wrong word, but found it really important) Asking For It by the same author, so I was excited to read her first (I think) adult book.

I was excited to read Almost Love because I found Asking For It such an important and powerful take on rape and rape culture and I knew that Louise O’Neill writes a lot about feminism and women’s issues and flawed female characters, all things that really attract me to her work. I was interested to see what her take on an obsessive relationship would be. Sadly I found that I didn’t enjoy Almost Love as much as I was hoping to (though again, I’m not sure enjoy is the right word for a book like this). It was an incredibly slow book for me to read, as there didn’t really seem to be much plot to it and I found the main character absolutely unbearable. I appreciate what Louise O’Neill was trying to do with this book, but it just didn’t really work for me. Here is a synopsis of the book:

When Sarah falls for Matthew, she falls hard.

So it doesn’t matter that he’s twenty years older. That he sees her only in secret. That, slowly but surely, she’s sacrificing everything else in her life to be with him.

Sarah’s friends are worried. Her father can’t understand how she could allow herself to be used like this. And she’s on the verge of losing her job.

But Sarah can’t help it. She is addicted to being desired by Matthew.

And love is supposed to hurt.

First off, I feel like I have to talk about the main character because I feel like this book will live or die for you based on how you feel about her. Sarah is, to put it quite plainly, a bitch. She’s awful, truly, a terrible friend, she’s judgemental, she’s vain, she’s incredibly self-obsessed, she’s selfish, she gets jealous of others for having success in their lives but she never TRIES to do anything to change her circumstances, she’s incredibly immature……I could go on. I understand the point that O’Neill was trying to make with this character, that female characters are held to too high of a standard, that they’re not allowed to be unlikeable or have flaws, I got that and I appreciate that O’Neill shows that women don’t have to be nice all the time. HOWEVER, when I can’t find any redeemable characteristics at all in a main character, male or female, it makes it very hard for me to like a book. Sarah frustrated me so much and I just couldn’t connect to her at all. I mean maybe if I’d been in that kind of relationship, if I’d been the girl who obsessed over whether a guy was going to text me or not, then I’d get it more, but I’ve only been in one relationship and it was never really like that. I didn’t feel any empathy towards Sarah and when you can’t relate or feel any empathy towards a main character of a book, it makes that book a really hard read!

The book is told in alternating first person and third person and switches between the past and the present, which makes for quite confusing reading because you’ll be in the past for a bit and then just when you’re getting used to that, you’ll be flicked back into the present and will suddenly be in third person. The intended effect is that you see how damaged Sarah’s thinking is when you’re inside her head and then can see how this has affected her, which I think does work, but it is confusing for a while!

There are a lot of sections of just back and forth text messaging between Sarah and Matthew and I get that O’Neill is trying to show Sarah’s damaging obsession and Matthew’s indifference, but pages and pages of text conversation are not exactly thrilling!

I couldn’t really understand Sarah’s infatuation with Matthew, he was a slimy, weaselly asshole who as far as I could tell had no real redeeming features and just wanted to use her for sex and it got me so frustrated that she couldn’t see that! Again, maybe it’s just my lack of experience with relationships showing, but I just don’t get how you could want someone who treats you that badly.

I felt worse for Sarah’s friends and family than I did for Sarah herself. They were the ones who seemed to bear the brunt of her obsession for Matthew, even three years later, her boyfriend Oisin is treated terribly by her because of what happened with Matthew-but it wasn’t his fault! It wasn’t his fault what Matthew did to her and her taking it out on him because he wasn’t the one she had wanted, even though he actually treated her better than Matthew did, was really harsh. Sarah is needlessly harsh to her dad, her friends, to everyone in her life and why? I just didn’t really understand it at all.

I felt especially bad for Fionn, who clearly had feelings for Sarah, and all she wanted to do was use him as her emotional punching bag for her “relationship” with Matthew. I kind of wish that had been explored more, because his feelings are only really hinted at and I think it might have been nice if it had been explored more, though I understand why it wasn’t since the past is entirely from Sarah’s point of view.

The ending was really anti-climactic, and though you see a hint of hope for Sarah, and some acknowledgement that she’s treated people in her life badly, there doesn’t seem to be any kind of real conclusion to her story, it just sort of ends.

Overall, this book had a lot of potential, but I don’t feel like it really lived up to it. Sarah was completely insufferable and I couldn’t connect or empathise with her, there was very little in the way of plot, it was mostly just Sarah being awful to people and the format was a little confusing. I will definitely be reading more of Louise O’Neill’s work because I love how she centres women and feminism in them, but this one wasn’t really for me.

Bechdel Test: FAIL-By the very nature of this book, it kind of has to fail the Bechdel test because Sarah is so unbearably obsessed with Matthew that’s all she really talks about with anyone, male or female.

My next review will be of my May #RockMyTBR book Rose Under Fire, which I will have for you tomorrow, as I just finished it today!