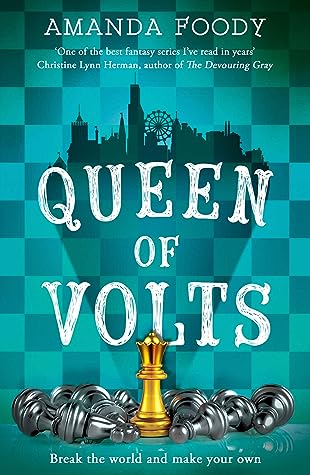 Publication Date: 1st September (okay, but the UK paperback doesn’t actually release till next Thursday, so technically it’s still coming out before a version of the book does!).

BECHDEL TEST: PASS-Lola and Arabella (The Bargainer) talk about Enne.

Content Warnings: Extreme violence, death, grief, attempted suicide/suicidal ideation, PTSD, toxic and abusive relationships (with a parent and a romantic partner), addiction, emetophobia (Can I just thank Amanda Foody for having these easily accessible on her website? Made my job SO MUCH EASIER).

Thank you to Netgalley and HQ Young Adult for allowing me to read this book early, this in no way affected my opinion of it.

King of Fools, the second book in The Shadow Game trilogy was one of my favourite books of last year, so naturally Queen of Volts was one of my most anticipated releases of this year. I don’t want to say I was disappointed, because there was a lot to love in this book, and I did ultimately find it a satisfying finale but it didn’t quite live up to the heights of King of Fools for me.

SPOILER ALERT: This review will contain unavoidable spoilers from the previous Shadow Game books. If you have not read Ace of Shades, or King of Fools, stop reading now.

Return to the City of Sin, where the final game is about to begin…and winning will demand the ultimate sacrifice.

Only days after a corrupt election and brutal street war, one last bloodthirsty game has begun. The players? The twenty-two most powerful, notorious people in New Reynes.

After realizing they have no choice but to play, Enne Scordata and Levi Glaisyer are desperate to forge new alliances and bargain for their safety. But while Levi offers false smiles and an even falser peace to the city’s politicians, Enne must face a world where her true Mizer identity has been revealed…and any misstep could turn deadly.

Meanwhile, a far more dangerous opponent has appeared on the board, one plucked right from the most gruesome legends of New Reynes. As the game takes its final, vicious turn, Levi and Enne must decide once and for all whether to be partners or enemies.

Because in a game for survival, there are only losers…

I’m going to start with my biggest bugbears from this book, because though there was definitely a lot to love about this book, the two big issues were the things that brought the book’s rating down for me.

First off, SO MANY POVS. TOO MANY POVS. There are five different POV characters in this book, and whilst I do understand why Foody did it this way, it makes the story somewhat difficult to follow. It did get easier as the book went along, but I still found myself having to flick back and forth because it had been so long since a particular character’s POV, I’d forgotten what they were doing. I did really like having Sophia and Lola’s POVs, because I love the characters, but I think having five POVs made things more confusing than they needed to be. The final book is also very late in the game (bad pun, sorry) to be adding a lot of new POVs.

And then we have the pacing…..ah the pacing. Pacing seems to be my old nemesis (I’m actually going to be doing a discussion post about it soon) and this book was definitely lacking. I was expecting a high speed, action packed finale, and we do get there, but it takes A WHILE. There’s a lot of talking and plotting and planning and not all that much doing for the first few hundred pages of the book and I definitely feel like some of that could have been trimmed because it did take a while for me to really get into the story. I was expecting the Game to be a lot more violent than it ended up being (even though there are some rather gruesome deaths) but the main characters are so unwilling to kill each other that everything remains at a standstill for longer than I’d like! (clearly I’m too used to reading violent fantasy books when I complain about not enough violence).

I did really enjoy the writing style, Amanda Foody has a great way of making you feel like you’re in the setting without ever getting into purple prose territory, which I love.

I also really appreciated that Foody showed her characters struggling to deal with the trauma that they’d faced in the previous books. A certain death in King of Fools has a big impact on all of the main characters and I’m glad she didn’t just brush past it and actually explored the fallout from it because so often books don’t. Enne’s PTSD and her issues with guns after the last book was particularly well done.

I was a little confused by the omerta logic in this book, Foody is usually pretty good at her worldbuilding but there are definitely some holes here, as a big plot point is that Harrison’s omertas will die if he does, but there are characters in the book that should have died in the previous book if that logic was true.

The Bargainer is a big part of this final book and she was definitely very interesting, though I kind of wish we’d learned more about the awful things she’d done in the past!

So Enne and Levi continue being their extremely frustrating selves in this book, and though their issues do make sense considering what happened at the end of the last book, there’s only so much back and forth I can take before it feels stale. They don’t really work through any of their issues really and it’s hard to believe they’ll ever be completely happy together when they spend a decent proportion of this book barely trusting each other. Honestly my feelings on them haven’t really changed from the last book, they have great chemistry but the angst makes them hard to root for as a couple.

I really liked Sophia’s arc, a lot of her arc in this book is about uncovering her lost memories and finding out about her past and that definitely had a really satisfying conclusion.

There’s a LOT of great reveals in this book for things that have been hinted at since the start of the series (Enne’s heritage, the origin of the Shadow Game, Lourdes, Enne and Levi’s hallway dream etc) and there’s a lot of stuff that really ties back to the first book in the series which I loved (despite being a terrible planner when it comes to my own books!).

I love the chapter separators in this book, it’s split into twenty two parts, and each one is named after a card in Bryce’s game, that little attention detail is great. The little quotes from New Reynes’ papers as well were a lovely touch. It also has a map (and I do love a map!).

Levi and Tock’s little heart to hearts were a real highlight of this book, as I felt the friendship moments kind of went by the wayside as there’s a lot of focus on the romances? Grace and Enne also have some lovely moments together, which makes up for the fact that Enne and Lola are at each other’s throats for most of the book. I kind of wish Grace had got a POV at some point in the series (though there were already enough in this book and I do understand why she didn’t get one) as I really loved her! She’s definitely the voice of reason that Enne desperately needs!

Speaking of Lola, her arc in this book I imagine will probably be one of the most polarising, because she definitely makes a lot of questionable decisions, but I think her arc made a lot of sense as she’s always been trying to find her place in the Game when she doesn’t really consider herself a player and a lot of her story is reconciling that and trying to work out her place in the world. I do wish she and Enne hadn’t been on the outs for so long, but it definitely make sense why they would be.

I will be honest, there were a few players, like Delaney, who I’d actually forgotten who they were because there are SO MANY CHARACTERS IN THIS SERIES.

The treatment of Enne by the Chancellor (Fenice sucks) and the other politicians vs Levi was a little jarring, though I don’t know if Foody intended on making a comparison with how powerful men and women are treated. Still, Enne seems to bear the brunt of the punishment, even though orb-makers are almost as feared as Mizers and Levi is just as much of a criminal as she is which didn’t seem very fair to me!

As with the other books in the series, this book continues to have a diverse cast of characters with POC rep, LGBTQ+ rep (most of the main cast is LGBTQ+) and some disability rep (Lola loses her hearing in one ear after an injury).

Harvey, who was barely featured in King of Fools becomes a major player here as his relationship with Bryce. I have to admit, I didn’t think Bryce as a villain was as well drawn as Vianca Augustine, but I did appreciate how Foody showed the toxic relationship between Bryce and Harvey in this book and how Harvey grew throughout the book to realise that he deserved better than Bryce. I was never really sure what side Harvey was on throughout the book, but that kept things interesting! It was also a really nice surprise to see Harvey and Narinder growing close in this book as that was something I wasn’t expecting.

There’s quite a few time skips throughout this book and as with King of Fools, I still found them slightly jarring and it wasn’t always immediately clear when they’d happened.

There’s one very brief sex scene between Enne and Levi, and between Harvey and Bryce. I was really glad that Foody emphasised consent in the scene between Enne and Levi (though there is a moment earlier in the book when Enne kisses Levi without his consent, not great). The fact that Levi mentioned he hadn’t been with a woman before so casually and that in no way negated his bisexuality and wasn’t at all judged was really great.

There’s a really great scene in The House of Shadows later in the book, I can’t say too much about it because it would be spoilery, but I loved how important Enne and Levi’s hallway ended up being!

The ending was very full circle, I thought Foody did a pretty good job of concluding everyone’s story and I loved how everything in the end circled back to the first book, it felt like a very completed arc (though obviously I hope that Amanda Foody does more books in this world at some point!).

Overall, this was a decent series finale but failed to live up to the heights of the second book, for me at least!

My next review will either be of Meagan Spooner’s Sherwood, or Susan Dennard’s Bloodwitch, depending on which one I finish first.