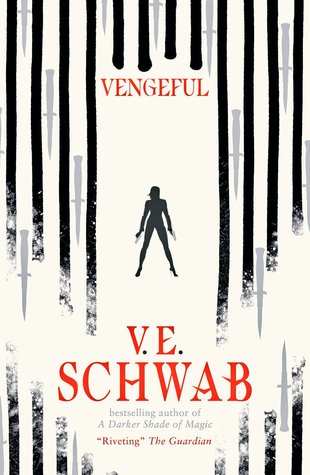 BECHDEL TEST: PASS-Marcella and June have a conversation where they discuss their powers and how they got them, which does not revolve around men.

Yes, I know, I know, it took me FOREVER to get to this book, especially since I finished Vicious the week before it came out, but in my defence, it came out at the beginning of fourth year and I was super busy! But I finally got around to it, and am obviously kicking myself for not having time for it for so long because it was AMAZING. I really enjoyed the first book, but this one had the volume turned up 1000%, I loved all the badass women, I loved all the new EO powers, V’s writing was as always amazing, and all the new characters were brilliant. Here is a short synopsis of the book:

Eli Ever and Victor Vale were only medical students when their mutual discovery that near-death experiences can, under the right conditions, manifest extraordinary abilities.

They were best friends, and rivals, and then enemies. They were dead, then alive, and then—Eli killed Victor, once and for all.

Or so he thought—but Sydney Clarke felt otherwise, and used her own superpower to tip the scales. Now, a trio hides in the shadows, while another takes advantages of post-death life to take over the city of Merit.

If there can be life after death—will there be calm after vengeance, or will chaos rule?

As with any VE Schwab book, her writing in this book was spectacular, every sentence sucks you in, she has such a masterful way with words that I honestly knew from the very first sentence that I was going to love it, which has been the way with most of my favourite books. It’s hard for me to exactly describe what I love so much about her writing, it just has this way of pulling you in, making you feel like you are a part of the story too and honestly I just find it totally addictive!

I also am in awe of her pacing, this book is over 570 pages long, and yet I never felt like I was bored, it helped that the chapters were short, because that meant I could read more in each session, but this book was much better paced than Vicious, which was 200 pages shorter and unlike a lot of long books, definitely did not feel like it was as long as it was.

I really loved that the women took centre stage in this book, I’d obviously heard before I read it that there were more women in this book and that they were going to play a major role but it was definitely great to read for myself. I loved the exploration of women and power, and getting to see women take control. The two new women in this book are Marcella and June, who are both awesome badasses in their own way: I liked that Schwab doesn’t monolith her female characters, they all have their own strengths and powers and flaws. Sydney also plays a major role in this book, watching her develop her powers and struggle with growing up whilst still maintaining the outward appearance of a thirteen year old was great. Her body image issues due to her lack of aging was also a very interesting aspect of her storyline in this book.

Marcella and June were particular favourites of mine in this book: Marcella is just so done with all the men who have ever underestimated her and wants to take the power that is rightfully hers, and June is powerful in a more subtle and less flashy way, and I love how well their powers fit with their personalities. Both of their powers were really awesome too, Marcella can ruin things with a single touch (even people) and June has the power to shapeshift, which was AMAZING. I loved Marcella’s death, it was such an awesome way to open the book and I hope we get more background on June’s death if we do get another Villains book, though I have to admit I did kind of like the mystery there.

The switching timelines were far easier for me to follow in this book than in Vicious, I don’t know if it was just that I was expecting it this time and so was more used to it, or if Schwab is just a more skilled writer now and did the transitions between the past and present better, honestly it was probably a combination of both. The plot of this book was complex and engaging without being difficult to understand which was perfect.

We got Eli’s backstory in this book which was awesome, I can’t say that I totally feel for him, but I do understand him a lot more now, and it was good to see where he came from and how he came to be who we know from Vicious. We got to see some particularly awesome flashes from his past, including how he originally met Eli, and how he originally ended up at Lockland.

I also loved that Schwab included Marcella’s backstory as well, it fleshed out an already awesome character, and really enhanced her present storyline. Schwab definitely knows how to use flashbacks effectively in a way that informs character decisions in the present timeline.

The worldbuilding in this book is, as per usual fantastic. You don’t get as much of a sense of place as you do in the Shades of Magic books, but honestly, I found that I didn’t really care, the powers and the limits of the world are established so well that you still feel like you’re in a fully fleshed out world, even if you don’t necessarily know what everything looks like.

Schwab is so skilled at fleshing out her villains, none of them are wholly good or wholly evil, they all live in shades of morally grey which makes them so much more interesting to read about than purely evil villains. I was rooting for even the most morally deplorable characters in this book, because as Schwab shows us, nothing is ever as simple as good vs evil. Honestly, Dr Haverty was the only person in this book who I felt was truly evil, and even he had quite an interesting role to play in the story.

It was very interesting how Schwab explored religion in this book through Eli, for me and the books I read, it’s quite rare to see a religious character and it was really cool to see how his religion influenced his attitude to his powers, and other EOs. I also liked how each part of the book was named after a different part of the Bible.

Marcella introduced a new element to the Eli/Victor rivalry in this book, and it was interesting to see how the two of them interacted both with her, and with each other, and though I can’t say much about what happens between the three of them, because it would be a massive spoiler, I can say that I loved it!

Stell’s storyline was quite an interesting one in this book, he works for EON, and is ostensibly meant to be capturing EOs, but he seems to have quite a complicated relationship with EOs and their status as human/not and I enjoyed seeing him struggle with this throughout the book, especially as he has to decide how to use Eli when Marcella’s threat becomes greater.

Dom also had a really interesting role in this book, as he straddles both worlds, as part of EON and being part of Victor’s little crew (he’s a spy on the inside for them) and I wasn’t expecting to grow to love him quite as much as I did by the end of the book. He’s not really in Vicious much, so we didn’t really get to know him all that well in the last book, but in this book, you really get to see him come into his own.

The powers of the EOs in this book are awesome, and I loved that as well as introducing new characters with new powers, Schwab showed us how the powers of the EOs we already knew, like Victor and Sydney could be extended, so we got to see elements of their powers that we didn’t see in Vicious and that also fitted well with the fact that it had been five years since we last saw them (in the timeline) so of course their powers had grown and developed.

I only have one little, tiny nitpick of this book, and it was that the use of full names vs nicknames wasn’t consistent. Characters would be referred to by one, then switch to the other and back again quite quickly. I know it’s common if you use a nickname to occasionally go by your full name in certain situations, but I think for reading purposes, I’d rather authors decide on one version of the name or the other.

As in all Schwab’s books, or at least the ones I’ve read, there are queer characters in this, Victor is confirmed asexual, which is brilliant as that’s rep that you don’t often get to see in books. I feel like June might be lesbian or bisexual (definitely not straight), given how she talks about Sydney, but that’s not confirmed on page, so don’t quote me on that one!

Vengeful wrapped up really well, in a way that was satisfying and it definitely could conclude the Villains series, but I’m pretty sure that I’ve seen Schwab say that she wants to do a third book and there is definitely enough still left to explore that I would welcome a third instalment of this series (and with that ending I’d be very interested in seeing how she did a third book)!

Overall, I thought Vengeful was an absolute masterpiece, filled with badass, awesome female characters,  so much moral complexity, an engaging and brilliant plot, creatively told and incredible writing. I am honestly in awe of VE Schwab’s talent and I seriously hope she does do another Villains book, because I would love to see these characters again!

My next review will be of my latest audiobook You, which I only have about 3 hours left of, it’s been an interesting one, definitely very different from my usual reads!