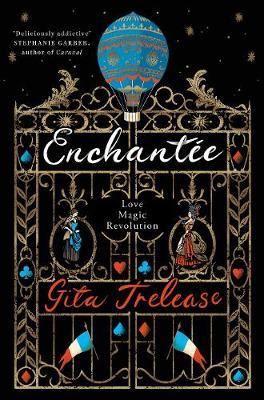 Bechdel Test: PASS-Sophie and Camille have several conversations which don’t revolve around men, and Camille talks to Claudette and Sandrine at the casino in a discussion which doesn’t involve men.

I received this book from Macmillan Children’s Books through Netgalley, in exchange for an honest review.

As always, thank you so much to Macmillan and Netgalley for allowing me to read this book early, it was one of my most anticipated debuts of 2019 so it was great to have a chance to read it before publication.

I was super excited to read Enchantee, fantasy mixed with history is basically my kryptonite, given that I love both magic and history, and the idea of magic mixed with the French Revolution was just so brilliant I couldn’t pass up the opportunity to read it. Obviously when your expectations are so high, there’s always a chance of disappointment but thankfully, that didn’t happen here and Enchantee was just as brilliant as I was expecting it to be. Here is a short synopsis of the book:

Paris in 1789 is a labyrinth of twisted streets, filled with beggars, thieves, revolutionaries—and magicians…

When smallpox kills her parents, Camille Durbonne must find a way to provide for her frail, naive sister while managing her volatile brother. Relying on petty magic—la magie ordinaire—Camille painstakingly transforms scraps of metal into money to buy the food and medicine they need. But when the coins won’t hold their shape and her brother disappears with the family’s savings, Camille must pursue a richer, more dangerous mark: the glittering court of Louis XVI and Marie Antoinette.

With dark magic forbidden by her mother, Camille transforms herself into the ‘Baroness de la Fontaine’ and is swept up into life at the Palace of Versailles, where aristocrats both fear and hunger for la magie. There, she gambles at cards, desperate to have enough to keep herself and her sister safe. Yet the longer she stays at court, the more difficult it becomes to reconcile her resentment of the nobles with the enchantments of Versailles. And when she returns to Paris, Camille meets a handsome young balloonist—who dares her to hope that love and liberty may both be possible.

But la magie has its costs. And when Camille loses control of her secrets, the game she’s playing turns deadly. Then revolution erupts, and she must choose—love or loyalty, democracy or aristocracy, freedom or magic—before Paris burns…

I really love Gita Trelease’s writing, I was hooked on her prose from the very first line (which is killer by the way) and that didn’t let up through the whole book, I’m not a particularly visual reader, but the way that Trelease wrote made me feel like I was in the grimy streets of palace and the beautiful halls of Versailles, experiencing Camille’s adventures alongside her, which is the mark of an amazing book for me. Her prose was gorgeous, but not so dense that it felt overwritten which I liked.

I thought the magic system was AMAZING. The whole idea of it, basically there are 3 different types of magic, la magie ordinaire, which is small, little tricks, glamoire which is disguising yourself and la magie bibelot which is making ordinary objects sentient. The idea is that magic is fuelled by pain and sorrow, so the more magic used, the higher price paid by the wielder, which I liked, magic should always have some sort of cost and that was right at the heart of Enchantee. It was also nice for once to have a magic system that was relatively easy to follow, I love fantasies, but the worlds and magic systems can sometimes be overly complicated, which wasn’t the case here.

The main character Camille was absolutely amazing. She was really easy to root for, her parents had died, she was trying to protect her little sister from their abusive older brother and she’s just trying to do her best to make sure that she and her little sister are able to live comfortably. What I liked most about Camille was that she was so flawed, she’s scared and she makes mistakes but she’s just doing her best to provide for her sister and make a better life for her and you could just really root for her. I also loved that her relationship with her sister, Sophie was so pivotal to this book, everything that she does, she does because she wants a better life for her sister, they had such a lovely relationship and being someone who particularly loves sister relationships in books, the one between Sophie and Camille made my heart soar. It’s really hard watching as Camille descends further and further into Versailles and loses more of herself, because you grow to care for her so deeply and honestly I was worried for her life at several points!

Camille and Sophie also have an older brother Alain, he was awful, an abusive, alcoholic who tries to take advantage of his sisters’ generosity, none of the characters in this book are morally perfect but he was the one character that I couldn’t really find anything redeemable about.

The romance in this was a lovely, slow burn one that I could really root for. So often I feel myself getting tired of YA romances because they all feel SO samey, but I loved Lazare and Camille, they were both so awkward and cute and really felt like kindred spirits, and their first kiss scene…..I mean WOW. Both she and Lazare are hiding a ton of secrets which makes their romance very complicated, but it’s so fun to watch them dance around each other trying terribly to hide their respective secrets. Lazare was amazing as well, I loved the biracial representation (this book is #ownvoices for that), and Lazare’s feelings of not being considered French or Indian came across as very realistic struggle.

I also really loved the hot air balloon aspect, I wasn’t expecting to, I didn’t really know how it was going to fit with the French Revolution, but it really did, I loved how Trelease used the balloon as a metaphor for the freedom the people are hoping is provided for them through the revolution, and as a way to connect both Lazare and Camille as both are looking for the hope & escape that the balloon provides them.

Chandon was probably my favourite of the court characters, he’s charming and kind of slippery and just generally so much fun. He’s also gay and I loved getting to see historical gay representation because yes, gay people did exist in the 18th century!

I loved everything about the Versailles that Trelease recreated in her book, it was beautiful and magical and dazzling but you discovered alongside Camille all of the dark underbelly of the court, yet you still found yourself addicted to the place, it was honestly like I was experiencing everything alongside Camille. It would have been so easy for Trelease to characterise the nobles of Versailles as “evil” especially given the timing of the story, but she doesn’t, instead they are all fully formed, complex humans and Camille discovers that there is a lot more to them than meets the eye.

I LOVED the magical dress that Camille used to help disguise herself at Versailles, I have a thing for gorgeous magical dresses (after Caraval) and this one was just brilliant, it’s somewhat sentient, so it helps Camille out a lot throughout the book but it’s also weirdly sinister and dark and I loved that. There’s a masquerade ball scene quite late on in the book and I JUST….a masquerade ball in 1700s Versailles? YES, YES, BOOK YOU HAVE STOLEN MY HEART.

The main villain, without wanting to reveal too much, is appropriately dark and twisted and really quite scary, it takes a while for him to be truly revealed but there is a dark undercurrent throughout the book and Camille is never quite sure exactly who to trust.

I loved the little name drops of actual historical people through the book, we see Lafayette and Jefferson and it just made my history loving heart leap a little to see real people mentioned in the book!

Trelease doesn’t go too much into the French Revolution but honestly I didn’t mind that, I actually preferred how she introduced an undercurrent of unease and unrest throughout the book and we just get the first explosion of Revolution because that’s not what the book was really about, it’s not about this big historical event, it’s about Camille and her internal struggles more.

Some people have said that the pacing lagged a little in the middle, but I don’t really agree, I felt like the pacing was pretty solid throughout. There are places that are perhaps slower than others, but I felt consistently engaged and excited by the story throughout, even in the quieter moments which I feel is a true testament to the writer. The ending chapters in particular were brilliant, I was on the edge of my seat wanting to see how everything worked out in the end.

I know there’s going to be a sequel and I’m super excited to be released back into the world Trelease has created here, but for those who don’t like cliffhangers, the book does end in a very satisfactory way that allows it to stand alone.

Overall this book was an incredible, magical romp through 1789 Paris and Versailles, with a sympathetic, flawed and brilliant MC, a wonderful sibling relationship at the heart of it, fabulous writing which completely threw you into the world & a simple, but incredibly effective magic system.

My next review will either be of Hamilton and Peggy! A Revolutionary Friendship or of A Curse So Dark and Lonely depending on which I finish first.