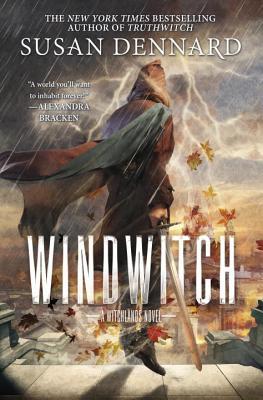 I really enjoyed Truthwitch when I read it back in February, I loved the central female friendship, I enjoyed the magic and though I found the world building confusing, I did enjoy the world. Therefore I was excited to dive into Windwitch, however I found it had classic second book syndrome, pacing issues, lack of narrative cohesion and a plot that didn’t really seem to bring the characters much further forward than they were at the end of Truthwitch. Here is a short synopsis of the book:

On a continent ruled by three empires, some are born with a “witchery,” a magical skill that sets them apart from others.

In this follow-up to New York Times bestselling Truthwitch, a shadow man haunts the Nubrevnan streets, leaving corpses in his wake―and then raising those corpses from the dead. Windwitch continues the tale of Merik―cunning privateer, prince, and windwitch.

I’ll start with my biggest issue with this book, the sheer number of point of view characters. There are 5 different point of view characters in this book, and often the perspective would shift multiple times in one chapter which made things kind of difficult to follow. I don’t know if this was exacerbated by the fact that I was listening to the audio, but I definitely would have found it easier to follow had there not been so many different perspectives. For instance, Iseult and Aeduan are together for a large portion of the book, we didn’t need both of their perspectives all the way through? Same for Merik and Vivia, once the two were together, we didn’t necessarily need both their perspectives anymore.

I also felt like I got confused as to who all the different characters were? Obviously I got the main characters, but there were so many different side characters that I genuinely couldn’t keep up with who everyone was!

There were also a lot of issues with the pacing of this book. For about 60-70% of the book, it was very slow as the characters were largely travelling, and then towards the end, everything got so fast paced that again, it was difficult to follow and I was less excited by all the action and more just confused as to what was going on.

If I’d had access to the paperback, I probably would have gone with that over the audiobook. I didn’t mind the way the narrator read the general text, but I wasn’t a fan of the way she did the different character voices when she was doing character thoughts or dialogue. The accents were all just far too similar and it was difficult to keep track of who was speaking. For convenience sake I probably will be reading the rest of the books in audio, as I don’t have the paperbacks of the rest of the books, but I’ve definitely listened to better narrators since I started listening to audiobooks last year.

The storylines didn’t feel massively connected, obviously Merik’s and Vivia’s were and Aeduan and Iseult’s but their storylines were separate from each other and from Safi’s as well, so it didn’t feel like this book was one cohesive narrative, more like several separate narratives combined into one book. It was also a little strange that given that this book was named after Merik, his storyline was probably the least memorable!

I actually really liked Vivia in this book? In the first book, she felt like your classic one dimensional villain but it was nice to get to see more into her character in this book and see beyond Merik’s rather clouded view of her.

I was really sad that Safi and Iseult were separated for most of this book, as I loved their friendship in the first book and it definitely felt like a lot of the “fun” from that book was missing from this one. I did however appreciate that Iseult having some time on her own allowed her to grow into herself more and become more confident with who she is, as well as develop her new found mysterious powers. She also had some really great badass moments of her own in this book.

I definitely feel like the women in this world are developed a lot better than the men! I feel like I properly know Iseult, Safi and Vivia now whereas Aeduan is still somewhat of a mystery to me.

Merik, I get a sense of who he is as a person, I just don’t massively like him! He’s really stubborn and gruff and he constantly misgenders Cam which wasn’t exactly endearing. I may be biased here though, as I really loved Cam, honestly Merik didn’t deserve such a great companion (and would have died without him).

The romances in this series are…..yeah pretty meh. I honestly don’t really see the chemistry between Aeduan and Iseult although maybe that’s because I still feel like we barely know Aeduan and it’s hard to get invested in a pairing when you feel like you don’t know who one of them is. Merik and Safi are apart for this whole book, but there seems to be a potential love triangle emerging here, which I’m not happy about, not because I love Merik, but more because I despise love triangles. It’s difficult to get on board with Safi and Caden anyway, since he keeps her captive for a lot of this book (which yes, I realise Merik did as well) and intends to return her to the Emperor of Cartorra.

I felt the character relationships in general in this book felt much flatter than in the first book, I guess because their storylines were largely separate and it didn’t feel like there was as much interplay between them.

I still really need more explanation when it comes to the worldbuilding! We get to see more places in the Witchlands in this book which is great, but I feel like I’m no clearer on all the different witcheries and the diferent relationships between the empires in the Witchlands.

The writing here was decent, though again I feel like I preferred the writing in the first book, though I’m not really sure why.

Ryber just sort of appeared from nowhere at the end, and I wasn’t really sure what happened there, though I guess things will become clearer in Sightwitch?

There was some LGBTQ+ rep in this book and some POC rep, which was largely decent, though like I said, I had some issues with the way Merik misgendered Cam throughout the book, as this book confirms that he is a trans boy.

The villains in this book were largely unseen, so it didn’t feel like the immediate stakes were massively high, even though the world is seemingly on the brink of war.

Overall, this book was a classic example of second book syndrome for me. It was slow paced, the constantly shifting perspectives were somewhat confusing and it didn’t feel like it advanced the overarching plot of the series all that much. I’m hoping that Sightwitch and Bloodwitch will be an improvement on this instalment!

My next review will be of Maggie Stiefvater’s, Call Down The Hawk, the first book in Ronan’s trilogy!