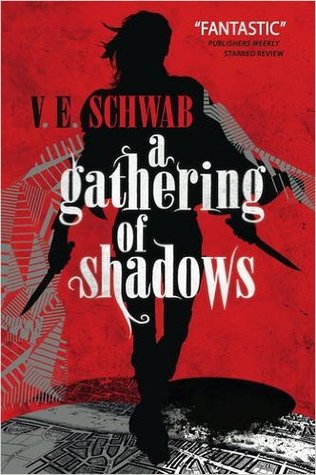 Book: A Gathering of Shadows (Shades of Magic #2)

I was so excited to read this book after reading A Darker Shade Of Magic because I loved that and even more excited after I met Victoria at YALC, it’s safe to say I had high hopes for this one. I am happy to say that I really enjoyed it (even if the end is making me mad!), I didn’t love it as much as the first one but I still really enjoyed it and am incredibly excited for A Conjuring of Light (if we could magically transport February so it comes sooner I would really appreciate that. I mean seriously that ending was cruel. CRUEL I TELL YOU! (Sorry I have many feelings about the end of this book, this may be the most difficult spoiler free review I’ve ever written). Here is a short synopsis of the book:

Four months have passed since the shadow stone fell into Kell’s possession. Four months since his path crossed with Delilah Bard. Four months since Rhy was wounded and the Dane twins fell, and the stone was cast with Holland’s dying body through the rift, and into Black London.

In many ways, things have almost returned to normal, though Rhy is more sober, and Kell is now plagued by his guilt. Restless, and having given up smuggling, Kell is visited by dreams of ominous magical events, waking only to think of Lila, who disappeared from the docks like she always meant to do. As Red London finalizes preparations for the Element Games—an extravagant international competition of magic, meant to entertain and keep healthy the ties between neighboring countries—a certain pirate ship draws closer, carrying old friends back into port.

But while Red London is caught up in the pageantry and thrills of the Games, another London is coming back to life, and those who were thought to be forever gone have returned. After all, a shadow that was gone in the night reappears in the morning, and so it seems Black London has risen again—meaning that another London must fall. (Okay, so it’s maybe not so short)!

The first thing I have to say about this book is that the characters are still amazing. My favourite of course is still Lila, I mean don’t get me wrong, she does some stupid stuff and most of the book is you in your head going “Lila, no!” and Lila going “Lila, yes” (which I think is a pretty accurate description of the rest of the characters’ reactions to Lila in this book as well to be honest) but she is still one of the most badass, complicated, intriguing female characters I’ve ever read about and I love her, she’s probably one of my favourite female characters I’ve read about. I loved getting to see her use magic in this book (her magic is so cool) and I also appreciated that VE Schwab used flashbacks showing her learning magic, because you get to see that she didn’t find it so easy and she really hard to work hard, which I liked.

I found that I had a new found appreciation for Rhy in this book. We didn’t really get to see much of him in ADSOM, but this book shows him at his best, you get to see just how charming and lovely and funny he is (which we got hints of in the last book) but also how clever he is. I don’t want to spoil it but basically there’s this scheme involving Kell and the Essen Tasch (Element Games which I will talk about a little later on in my review) that really shows off how smart Rhy is. I also loved getting to see more of the brotherly bond between Kell and Rhy in this book and liked that Schwab explored the effects of what happened to them both in the last book in this one (I don’t want to spoil for those who haven’t read the first book, so I can’t say!). I loved how great Rhy is at languages, I could connect with that as I was quite good at languages when I was at school.

I felt really bad for Kell in this book. The events of the last book have had some severe consequences for him in that the King and Queen blame him for what happened and it wasn’t even really his fault (not completely anyway). Basically, I spent most of this book wanting to give him a hug. I felt like he was a lot more sombre and serious and less sassy in this book but it fitted with the tone and I still really liked him and I feel like we got to see even more of the extent of his powers in this book which was cool. I also loved how fiercely protective he was of Rhy (and of Lila), and they was a funny moment with him and Rhy that I particularly loved.

I don’t want to go as far as saying I liked the new character Alucard, because I feel like that would be stretching it (I don’t entirely trust him, he’s a little shifty) but I thought he was intriguing and he filled the mentor character for Lila quite well. I look forward to seeing the full extent of his powers because although we get to see quite a bit, I still feel like he’s more powerful that he lets on. I’d also like more of Kell’s grudge against him to be explored because it was touched on but I feel like there could be more to it. I’d like to see some flashbacks with his relationship with Alucard because the one scene they had together was steamy and I like to see more! I also appreciate that there wasn’t really romance between Alucard and Lila (aside from one kiss, though their chemistry was hot!).

There is some progression with Lila/Kell’s relationship, but not so much that it took over the book which I liked. I actually would have liked to seen Lila and Kell interact more, they’re apart for most of the book. However the ball scene was amazing and there were some other great Lila/Kell scenes through the book, so I think I can forgive VE Schwab for keeping them apart for most of the book. I love that it’s so obvious to everyone but them that they like each other. I also liked the similarities between Kell and Lila in terms of their longing for freedom and how you would expect that Kell has more freedom because he’s an Antari and can go anywhere but it’s actually Lila.

The White London storyline I think was the weaker aspect of this book probably because only one chapter of each part was dedicated to it and it didn’t really tie in to the story as whole until the end. I have a lot of questions about the new character in this part, Ojka and who she actually is as it’s not really explained. I liked that it tied in at the end but for the most part it didn’t seem to fit with the rest of the story.

I’m interested as to what might be happening in Grey London, we get to see glimpses of it during the book and there’s a possibility that magic may not be as dead there as it might have seemed and I’m very excited to see where this goes in the next book. Having said that, I liked that most of this book took place in Red London, it was fun to learn about all the cultures and customs and other parts of the Red World such as Faro and Vesk. I also liked getting to see the Veskan and Faroan royal families.

I loved that we finally got to see a glimpse of Black London in this book, it was very creepy and I hope we get to see more of it in the next book.

I really liked Calla in the last book and I was excited that we got to see her again in this one. She’s like the book manifestation of us readers fangirling about Lila and Kell and I loved it.

I wasn’t expecting to like Kell’s new guards, but Hastra was quite cool and I loved his magic, it was cool seeing another priestly character aside from Tieren. He was actually quite interesting and I’d really like to get to learn more about him if possible in the next book (Honestly Schwab could do a whole new series about some of the side characters in these books-and I hope she does!). I also found it very cool when I found the quote that VE Schwab had written in my book when she signed it in the actual book and learnt what it meant-Stas Reskon-which means chasing danger (otherwise known as the perfect description of Lila).

This book is very character driven rather than plot driven, I will warn you know for those who are plot driven readers (like me) but the characters are so well drawn that this works for it. Even so I did find myself getting a little restless at times for the real action to start (which when it does it steamrolls on!), so I will warn you now, this is not a fast paced book. Even so, Schwab writes the action scenes of this book very well, it’s all edge of your seat nail-biting stuff. Especially the Essen Tasch, I loved that, all of the fight scenes were made even more amazing because of the magic. I need more magic tournaments in my life people!

There were several typos and slightly misphrased sentences in this book, which don’t usually bother me too much, but it does jar you a little when you come across them. I know this is more of an editing problem and there weren’t many typos, only about four, but more careful proofreading is needed!

Maxim is kind of an ass in this book (the Queen isn’t great either but it was more noticeable in Maxim) and I hated how he treated Kell. I get he’s worried for his son but it wasn’t entirely Kell’s fault what happened in the last book, so I thought his treatment of Kell was a little out of order.

I found it so funny when Lila was trying on a dress for the ball, she was so uncomfortable, it was hilarious!

THAT END! OMG THE END! VICTORIA SCHWAB HOW COULD YOU DO THIS TO ME, YOU ARE AN EVIL GENIUS AND I LOVE/HATE YOU FOR IT! I CANNOT BE LEFT HANGING LIKE THAT FOR MONTHS! NOT COOL SCHWAB, NOT COOL! I HAVE TO KNOW WHAT HAPPENED, I HAVE TO KNOW! I CANNOT WAIT TILL FEBRUARY, IT’S GOING TO KILL ME. THIS MAY BE THE MOST EVIL CLIFFHANGER I HAVE EVER ENCOUNTERED AND I READ RICK RIORDAN’S BOOKS!  (sorry mini rant over.If my reaction is a spoiler I am sorry but I have feelings and I cannot hold them in damn it!).

Basically I need A Conjuring of Light. Like now.

I am not sure what my next review will be as the next book I’m reading is a review book and the review won’t be post until 20th September at the earliest, so it depends what else I read between now and then.