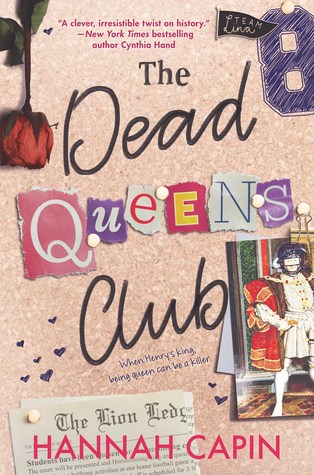 BECHDEL TEST: PASS-Numerous instances of conversations between women about topics other than men.

The Dead Queens Club was my August #RockMyTBR challenge book and I have to admit, I was a little nervous for it because although I love the Tudors and this book seemed right up my alley, I was very disappointed by Capin’s second novel, Foul Is Fair earlier this year. I’m glad to say though, that I really enjoyed this book! It’s super funny, very feminist and I loved how the author interwove Tudor history to a contemporary setting, it worked really well. Here is a short synopsis of the book:

Mean Girls meets The Tudors in Hannah Capin’s The Dead Queens Club, a clever contemporary YA retelling of Henry VIII and his wives (or, in this case, his high school girlfriends). Told from the perspective of Annie Marck (“Cleves”), a 17-year-old aspiring journalist from Cleveland who meets Henry at summer camp, The Dead Queens Club is a fun, snarky read that provides great historical detail in an accessible way for teens while giving the infamous tale of Henry VIII its own unique spin.

What do a future ambassador, an overly ambitious Francophile, a hospital-volunteering Girl Scout, the new girl from Cleveland, the junior cheer captain, and the vice president of the debate club have in common? It sounds like the ridiculously long lead-up to an astoundingly absurd punchline, right? Except it’s not. Well, unless my life is the joke, which is kind of starting to look like a possibility given how beyond soap opera it’s been since I moved to Lancaster. But anyway, here’s your answer: we’ve all had the questionable privilege of going out with Lancaster High School’s de facto king. Otherwise known as my best friend. Otherwise known as the reason I’ve already helped steal a car, a jet ski, and one hundred spray-painted water bottles when it’s not even Christmas break yet. Otherwise known as Henry. Jersey number 8.

Meet Cleves. Girlfriend number four and the narrator of The Dead Queens Club, a young adult retelling of Henry VIII and his six wives. Cleves is the only girlfriend to come out of her relationship with Henry unscathed—but most breakups are messy, right? And sometimes tragic accidents happen…twice…

As I mentioned at the top of my review, I’m a massive Tudor history nerd. I’ve loved the Tudors ever since I was a kid, and I specifically chose to do the modern/early modern hybrid History A Level at my sixth form because it gave me the chance to study more of the Tudors. And this book is a Tudor nerd’s dream: there are so many little references to people and events from Henry VIII’s reign which made me so so happy! I won’t bore all of you with every single one because I know you guys might not be as into this time period as I am, but as an example of one of my favourite ones, Hans Holbein, who famously painted King Henry VIII’s portraits is reimagined here as the yearbook photographer. There are many others throughout the book, so if you like this period of history, it’s a veritable goldmine. I love it when authors writing books inspired by history have clearly done their research!

There was even quite a few things that I didn’t know about Tudor history that I learned from this book. I wasn’t familiar with Jane Parker for a start (here she’s Parker Rochford, head cheerleader) and her relationship with the Boleyn/Howards and I felt kind of bad about that because Parker in this book is pretty awesome. I also had no idea that Eustace Chapyus (here Chapman) who was a French diplomat, and essentially the court gossip was someone who existed!

I’m a big fan of funny books and this book definitely had that in spades! Cleves is a brilliant narrator (though she’s probably the least like her real Tudor counterpart, by all accounts Anne of Cleves was a fairly quiet, pious woman and definitely not as feisty as Cleves is depicted here), and though she can be quite indecisive and a little hypocritical, I liked that she wasn’t the perfect feminist and still showed some hypocrisy in her views, because hey, don’t we all?

The dialogue was a little cringey in places, but I mostly put that down to the fact that I’m not a teenager anymore and I reckon younger teenagers would enjoy it.

I do kind of wish she hadn’t gone down the “Cleves still has a thing for Henry route”. For the most part, their relationship was fairly platonic but there’s still an element of romantic interest, and I felt like it was a missed opportunity to show a completely platonic M/F relationship in a YA book because we need to see more of them. Also the real life Henry and Anne were completely platonic, he referred to her as “my beloved sister” and I don’t see why that couldn’t have been the case here. I feel like Cleves could still have felt betrayed by him as friend without adding the romantic component. Also it would have made their breakup make more sense, like, we tried but it was weird because we only really saw each other in a platonic way, is a much better reason for a breakup than the weird one Capin went with.

In terms of the way the “Queens” were presented in this book, I generally really enjoyed it. I had a couple of quibbles, the first one being that Jane Seymour is presented as the “dull, forgettable one” and though that is somewhat made up for at the end of the book, it does seem a little reductive for a book so focused on feminism (though granted this does mainly come from Cleves’ perception of her, which she acknowledges may have been wrong). I think Jane being cast as the dull, forgettable one mostly comes from the fact that she died very early on in her marriage to Henry and so less is known about her than Katherine of Aragon or Anne Boleyn (though obviously the time period means that everything is somewhat less well documented than it is nowadays). There probably is a middle ground to be found between the sweet Jane often depicted and a more calculating woman (she did marry Henry less than two weeks after Anne’s execution) but I think depicting her simply as dull & forgettable lacks some nuance.

The second is Anne Boleyn (in the book known as Anna). We only really get to see her through everyone else’s view of her, as she is dead before the events of the book begins, so I feel like she is somewhat stereotyped as the “evil seductress who stole Henry” and although the book does try to tackle those stereotypes, again I feel like her portrayal lacked nuance because there’s so much more to the real Anne than the fact that she was one of the reasons behind Henry and Catherine’s marriage breakup, she was according to sources, well educated, passionate, interested in reform, quite charming and yes, probably quite ambitious too. She and Henry actually had a fair bit in common!  Anne’s portrayals do tend to fall very into the binary, and much like with Jane Seymour, the truth probably lies somewhere in the middle (though we may never know because again information about her is still somewhat limited).

I did however love what she did with Katherine Howard (Katie here). Katheryn gets unfairly maligned as basically a naive “slut” because she was very young when she married Henry, and she did (as far as sources can tell us) have affairs. She was only around 16/17 when she married him and HE WAS 49, and both of the men she is claimed to have slept with were almost ten years or more older than she was. All of this to say, I really liked that this book took a more sympathetic view of her and showed her as a sweet and caring person, and didn’t judge her for the fact that she enjoyed sex. I also appreciated that this book shone a light on her as a victim of sexual abuse, because by modern standards, that’s accurate: she was a young girl who was groomed by much older men. I did feel like her death was kind of brushed over though, especially when Cleves and Parker both seemed very close to her.

The chapter titles were really awesome, the way that they’re all framed as newspaper headlines (Cleves is a reporter) is great.

Henry is 1000% the bad guy in this book and I loved it! Henry VIII was not a great person, he treated his wives (and his friends) awfully and no amount of charm can make up for that!

The whole Catherine of Aragon/Anne Boleyn thing does seem somewhat overdramatic when you place it in a modern high school context, because all the characters refer to Lina (Catherine, her birth name was Catalina, it was anglicised as Catherine) and Henry as having been together “forever” but in a high school context, that’s only two years!

I loved that she turned the whole girl hate thing between Cleves and Cat on its head (eventually) as it basically seemed like Cleves only really hated Cat because she wanted her stories to be more based in fact and less in gossip (which as a journalist seems like no bad thing to me). I also may be a little biased because I think Cat and I would get along quite well if she wasn’t fictional! In general though I thought it was really great that female friendships were at the centre of this novel, the girls’ romances with Henry are kind of coincidental and there’s far more emphasis on friendship which I loved.

The pacing was a little slow through the first half of the book, but it actually wasn’t a major problem for me, I was really hooked by Cleves narration, so I didn’t really mind that the plot took a little longer to get going. The ending was super intense though, I did not want to put the book down!

Overall, this was a brilliantly funny retelling of the wives of Henry VIII, centring them rather than him and I thoroughly enjoyed it. I hope Hannah Capin does more history inspired retellings, because this worked far better than the Shakespeare for me!

My next review will be of my current audiobook, the final book in the Daevabad trilogy, The Empire of Gold, by S.A. Chakraborty.