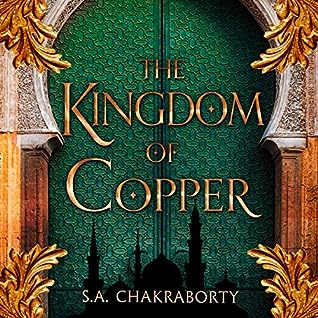 Book: The Kingdom of Copper (Daevabad #2)

I really enjoyed The City of Brass when I read it back in April and naturally was super excited to read the sequel as soon as I could. I did end up really enjoying it, though not as much as City of Brass, simply because it was slower and longer than I would have liked and it took me a bit to actually get into the story. Still I really loved the characters and the world, and the last few chapters…..WOAH. Here is a short synopsis of the book:

S. A. Chakraborty continues the sweeping adventure begun in  The City of Brass conjuring a world where djinn summon flames with the snap of a finger and waters run deep with old magic; where blood can be dangerous as any spell, and a clever con artist from Cairo will alter the fate of a kingdom.

Nahri’s life changed forever the moment she accidentally summoned Dara, a formidable, mysterious djinn, during one of her schemes. Whisked from her home in Cairo, she was thrust into the dazzling royal court of Daevabad—and quickly discovered she would need all her grifter instincts to survive there.

Now, with Daevabad entrenched in the dark aftermath of a devastating battle, Nahri must forge a new path for herself. But even as she embraces her heritage and the power it holds, she knows she’s been trapped in a gilded cage, watched by a king who rules from the throne that once belonged to her family—and one misstep will doom her tribe..

Meanwhile, Ali has been exiled for daring to defy his father. Hunted by assassins, adrift on the unforgiving copper sands of his ancestral land, he is forced to rely on the frightening abilities the marid—the unpredictable water spirits—have gifted him. But in doing so, he threatens to unearth a terrible secret his family has long kept buried.

And as a new century approaches and the djinn gather within Daevabad’s towering brass walls for celebrations, a threat brews unseen in the desolate north. It’s a force that would bring a storm of fire straight to the city’s gates . . . and one that seeks the aid of a warrior trapped between worlds, torn between a violent duty he can never escape and a peace he fears he will never deserve.

SPOILER ALERT: This review will contain some unavoidable spoilers from both The City of Brass & Kingdom of Copper. If you do not want to be spoiled, then stop reading now.

So once again, my biggest issue with this book was the pacing, it’s an incredibly lengthy book (at 23 hours 14 minutes) and it doesn’t really pick up until the second half. I get that adult fantasy tends to be slower, but I just don’t want to wait till more than halfway through a book before the exciting stuff starts happening! Some of the chapters are also really overly long, I mean just the PROLOGUE was an hour!

Dara gets a POV in this book, and it just didn’t really fit with what was going on with Nahri and Ali’s storylines, it felt really disconnected. It wouldn’t really have impacted the storyline of this book one iota if he had stayed dead and Manizheh’s plan had gone ahead the same, though admittedly I may be biased because I still really hate him. But still, I did feel that Dara’s chapters contributed to my struggle to get into this as much as City of Brass, his chapters didn’t really push the story forward in the same way that Nahri and Ali’s did and I honestly think the book would have been better without them.

I loved that there was more focus on the women in this book, especially Nahri’s relationships with the different women in her life as that was one of my biggest problems with the last book. Here we get to see women play much more of a starring role, including getting to see more of Ali’s sister Zaynab which I loved. I particularly loved the inclusion of the shafit doctor, Subha, it was lovely to get to see Nahri have a female mentor who could teach her more about human methods of healing as well as Nisreen.

I wasn’t expecting the five year jump and it worked well in some respects, it was nice seeing the characters more settled in their lives but at the same time, I would have liked to see Nahri growing into her powers more. It also felt like there was no real reason for it, as I think the same storyline could have quite easily happened immediately following on from The City of Brass, though I understand that the author probably wanted Nahri and Ali to have spent a while away from each other.

I still really enjoyed S.A. Chakraborty’s writing style, she describes everything in such a beautiful way and the food descriptions made me feel so hungry, all the food sounded so delicious! Soneela Nankani did a great job with the narration as well.

The family dynamics in this are super interesting, particularly between Ali and Muntadhir, as the heir to the throne and his brother, there’s a lot of tension there and it was very interesting to see how that played out. It was also cool to see Ali and Zaynab’s mother in this book and how she changed things for them, and I liked how Nahri fitted into their whole family dynamic especially with Zaynab, after their rocky start in City of Brass. Familial relationships are at the forefront of this book which I loved as so often it is romance that is centred.

Speaking of romance, I was glad that took a backseat in this one, I’m even less on board with Dara and Nahri after the events of this book and to be honest, I don’t think Nahri is really in that place anymore either. I definitely think the swerve away from romance allowed all of the characters more space to develop individually, which I loved. It’s hinted that Ali has feelings for Nahri, but I really hope S.A. Chakraborty doesn’t go there, because I love their friendship and I really want to see a male/female friendship in a book that doesn’t end in romance!

Nahri and Jamshid’s newfound friendship was another highlight in this book, they had such a heartwarming friendship when it would have been easy for the author to go down the “you’re having sex with my husband so we’re enemies” route. It would have been nice if we’d got to see Nahri interact with Razu a bit more, as that seemed like it had the potential for a beautiful friendship.

I don’t love that S.A. Chakraborty keeps leaning very close to the “bury your gays” trope with Jamshid and Muntadhir, there have been a few too many fake outs there for my liking!

There are so many twists and turns towards the end of this book, which are very exciting but did feel a little rushed in places. Still they definitely set things up for a really exciting finish in the third book!

THE ENDING. S.A. Chakraborty seems to be really great at sticking the landing and once again this ended up in a place where I was really excited for the final book, and I can’t wait to see how things all end.

My next review will be of one of my current Netgalley reads, Girl Serpent Thorn by Melissa Bashardoust.