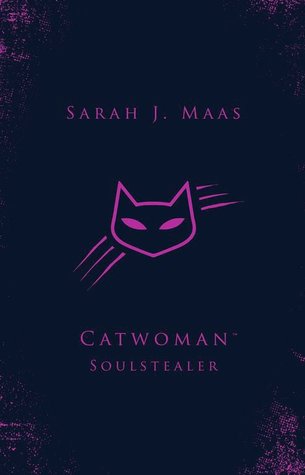 BECHDEL TEST: PASS-Selina, Ivy and Harley all talk to each other about things other than men, their heists, Ivy’s past, Ivy & Harley’s relationship etc.

Catwoman: Soulstealer was my April #RockMyTBR book, I got it last summer but was kind of putting it off because I’d heard some mixed reviews of it, despite the fact that Sarah J Maas is one of my favourite authors and also I’m not really a massive comics person? I’ve been getting more into comic book related stuff over the past year or so, I’ve watched The Flash and Arrow (both of which I enjoyed) and the Marvel shows on Netflix (with mixed results), but the most I know of Catwoman is from the Halle Berry film, which from the little I can remember of it, wasn’t very good. Anyway, all this to say that I had pretty low expectations of this book going in, but I think that was a good thing because I ended up being pleasantly surprised and enjoying it a lot more than I thought I would. It was a refreshing change of pace from ACOTAR or Throne of Glass and it was nice to see Sarah playing around in a different world, but still putting her own unique spin on things. Here is a short synopsis of the book:

When the Bat’s away, the Cat will play. It’s time to see how many lives this cat really has. . . .

Two years after escaping Gotham City’s slums, Selina Kyle returns as the mysterious and wealthy Holly Vanderhees. She quickly discovers that with Batman off on a vital mission, Batwing is left to hold back the tide of notorious criminals. Gotham City is ripe for the taking.

Meanwhile, Luke Fox wants to prove he has what it takes to help people in his role as Batwing. He targets a new thief on the prowl who seems cleverer than most. She has teamed up with Poison Ivy and Harley Quinn, and together they are wreaking havoc. This Catwoman may be Batwing’s undoing.

Now let’s start with the obvious here, I don’t have any experience of Catwoman in other forms. I’ve only watched the one film featuring her and it was so long ago that I barely remember, and I don’t read the comics. I’m also not massively familiar with Gotham. I felt that this was actually a help rather than a hindrance to me here though, because I wasn’t going, oh such and such is different to the comics and although it does assume some basic knowledge, it’s easy enough to follow if you’re a DC newbie, which I appreciated.

I liked Selina, she’s smart and cunning, very good at gymnastics and a pretty ruthless killer. I don’t know how Catwoman is in the comics, but I liked that Selina still felt very human, she can be vulnerable, she’s not totally one thing or the other, completely good or completely evil, her characterisation was quite a nuanced take on a villain and in fact I would argue, probably more anti-heroine than villain here, which worked quite well for the story. She’s very easy to root for and despite reading some reviews that said she was basically just a carbon copy of Celaena, I would have to disagree, whilst Selina does have some of the same swagger as Celaena, I thought her character was a lot more nuanced. The contrast between Selina as Catwoman and as Holly was done pretty well also, I think helped by the dual POVs because we get to see her through her own eyes as well as Luke’s, so the contrast is emphasised even more.

The pacing in this was much better than usual for Sarah J Maas’ books, it was a bit of a slow starter, but the chapters were nice and short and once we got into the Catwoman action, the pace really picked up. I think writing a standalone did force her to not include as much filler as she does in her series’ which was very much to the benefit of the book! I will say that there were aspects of the plot that were a bit repetitive, a lot of Catwoman/Batwing confrontations, many heists and quite a bit of Luke and Holly (Selina’s alter-ego) hanging out, but I think that was just the nature of the book and for the most part I did enjoy all those things, so it’s not necessarily a complete negative, just something to note.

I really loved Selina’s relationship with Maggie, I can’t really say too much about it without diving into spoilery territory, but I am a sucker for a good sister relationship and this definitely was one. Maggie has cystic fibrosis as well, which is not something that you often see in books!

Luke Fox, aka Batwing, I did feel was a little bland. I liked that Sarah J Maas had a non-white love interest in this and I appreciated the PTSD rep, because again that’s something you don’t often see, but Luke as a character didn’t really make much of an impression on me. He was also kind of an incompetent hero, he didn’t seem to be able to do anything about Catwoman and all the chaos she was causing. I also didn’t really feel like there was much chemistry between the two of them, perhaps slightly more as Catwoman and Batwing, but as Luke and Selina (well Holly)? Not so much. I do love that she always emphasises consent in romantic relationships though and that’s seen again here (this book does not contain the same level of graphic sexual content as some of her other books, just a little kissing).

I really enjoyed the flashbacks to her time at the League and I would have liked to have seen more of them, the way the story works is we get the setup of how Selina joined the League at the beginning and then it skips right ahead to two years later. Now I understand why Sarah J Maas did this, training montages can be quite dull and she wanted to preserve the mystery for later in the book. However, we only really get to see brief glimpses of what happened at the League and I just would have liked a little more because I really enjoyed those parts.

The writing was for the most part okay, it’s a much simpler style of prose than she uses for her other books which made sense since the overwrought but very pretty metaphors she uses in her Fae worlds would have been extremely out of place here. I will say though that there were occasions when the writing felt a little stilted and there were some odd phrasings here and there, but for the most part, it was pleasing to read and fitted well with the setting and the story. Also much to my relief, she was not too overzealous on Catwoman purring!

I really enjoyed all the cool tech, it was a nice taste of what could be to come in her new series, Crescent City as that’s supposed to be a more futuristic setting than her other books. Ivy’s powers as well with the biotoxins and the plants were really cool.

I loved all the female friendship in this, it was wonderful to see Selina working together with Ivy and Harley to cause chaos, though I will say that I think Harley could have been more fleshed out, I felt like Ivy was the more developed character of the two of them, you get more of her history and talents than Harley’s.

There are obviously some really great action sequences in this, particularly towards the end, which I really loved. One of my favourite scenes is as Selina (as Catwoman) and Harley and Ivy are leaving one of their heists, they get the band to play them out with “Don’t Stop Me Now” which I just found so funny.

Selina’s motivations are somewhat murky throughout the book, which is initially annoying but you do get really great pay-off in the end and I loved how Sarah tied everything together as the final plot unfurled and it really makes sense as to why she does everything she does throughout the book and comes together in such a satisfying and exciting way.

I will say that Sarah employs a trope she’s used in previous books in this one again, and it kind of irritated me because it seemed a little implausible that particular trope would be possible here, given the circumstances in the book.

It all wrapped up very nicely, and whilst it’s definitely a standalone book, if Sarah was ever asked to do a sequel by DC, I would be very happy because I’d love to see Selina and her friends causing more chaos together!

Overall this was a really enjoyable book, lots of fun action, cool tech, a great main character and epic female friendships, I would definitely recommend this book whether you like comic books or not!

My next review will be of the sequel to The Exact Opposite of Okay, A Girl Called Shameless by Laura Steven, though that probably won’t be until the end of the month, since I’ve only just started it!