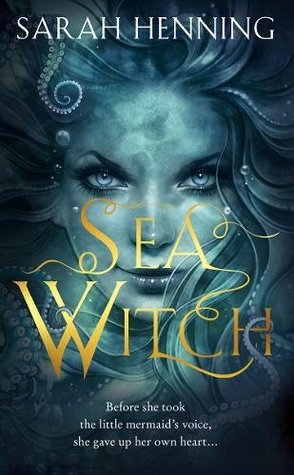 Thank you to HarperCollins and Netgalley for allowing me to read this book early, I love a good villain origin story and it was great to have the chance to read it pre-publication.

I was super excited for this book, despite The Little Mermaid not being my favourite fairytale (or at least not my favourite Disney movie!) because I do love a good villain origin story and since Ursula/The Sea Witch, is a great villain, I was expecting lots of darkness and evilness from this story. Sadly, I didn’t quite get what I expected, and instead of being a fun, magic filled, villainous romp, Sea Witch was more of a dry, historical retelling of witches in 17th/18th? (honestly I’m not really sure what century) Denmark with a hint of fairytales mixed in.

The pacing was ridiculously slow, it took a good 70% of the book for anything to happen, most of the time, it was just the characters milling about, celebrating a big Danish festival, drooling over each other and just generally going about their daily lives. Now I understand that books can’t be non-stop action all the time and I would probably be pretty bored if they were, but if I have to wait until the book is nearly over for anything to happen, then I’m sorry, but you’re doing something wrong.

I found the characters incredibly difficult to connect to. Evie didn’t really seem to have all that much personality, neither did any of the other characters, and since they all felt flat to me, I struggled to care about any of their struggles. Iker and Nik were just your average flat male love interests, who existed to serve no purpose other than provide romantic conflict for the story and even then, that didn’t really work because neither character seemed to have chemistry with their respective romantic interests. Annemette was the most interesting of the four main characters, but even then, it took far too long to get to the good parts of her character. I also would have liked to know more about Evie, Iker and Nik’s relationship with Anna before she died as that would have been helpful for context later in the book.

Each chapter had a flashback to the characters’ past between them, and whilst I understand what the author was going for with these, they just felt extremely choppy and made the transitions between each chapter seem rough. The writing quality in the flashback chapters was also significantly lesser than in the rest of the book, a lot of repetitive phrases were used and annoyingly, all the characters were referred to by hair colour rather than name!

The Danish world was cool and I think if it had been developed more then the mix of Danish history with magic could have worked really well but like much of the story, the world was also underdeveloped: there wasn’t really enough of Evie being a Witch for the story to be considered fantasy but not really enough history for it to be considered historical either, so it kind of occupied this weird hybrid space where it was trying to be both but ended up being neither.

The twists were meant to be exciting, but they were kind of predictable, so instead of feeling WTF just happened when they came up, it was more of a “Thank goodness, it’s finally been revealed”.

The writing, aside from in the flashback chapters was decent enough, but nothing earth shattering.

There was no obvious representation of race, sexuality, disability in the story at all, and there’s no reason why in magical Denmark there couldn’t be people who weren’t white, straight, cis or ablebodied. Also, the two female characters, whilst initially seeming friends, had an incredibly shallow friendship which descended into girl on girl hate by the end of the book, which is one of my biggest pet peeves.

It would also have been helpful to have a glossary and pronunciation guide, as there were several unfamiliar Danish words throughout the book, and I like to know what unfamiliar words mean and how to pronounce them!

This book also had one of the tropes that I have a serious love/hate relationship with, the best friend is secretly in love with the MC. Now don’t get me wrong, some of my favourite romances are friends-to-lovers ones, and I do think that all the best romances in books start with friendship, but I don’t think every male/female friendship needs to lead to romance, it gives the wrong impression to teenage girls that they can’t have a platonic relationship with boys.

Overall, I loved the concept of this book, but felt that the execution fell short, everything needed to be developed more, the world, the characters, the history. It had so much potential to be a cool, dark, witchy villain origin story, but it tried to combine too many things and in the end, didn’t manage to be any of the things that it was attempting to be.

BECHDEL TEST: FAIL-The female characters in this book only real interactions are always about the men in their lives, because you know….that’s all women talk about *severe eye roll*.

My next review will be of For A Muse of Fire, which will be coming for you very soon, I’m running a little behind on reviews because I had an essay due last week, I’m sorry!