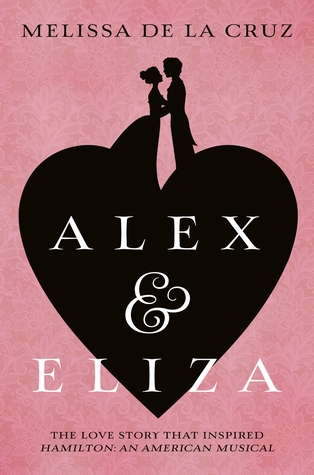 Bechdel Test: Fail-All the conversations Eliza has with other women in this book revolves somehow around Hamilton.

This month on the blog is Hamilmonth, in honour of me going to see Hamilton for the first (and I’m sure not last) time in London with my friends next week (yes, I’m ridiculously excited about it and will not stop talking about it), so I decided to read the two Hamilton related books that I had on my bookshelf in the weeks leading up to going to see the show, and to kill two birds with one stone, this is also my #RockMyTBR book for February. I was really looking forward to this one, since obviously I love Hamilton the musical, but I found it a little disappointing. There were a LOT of historical liberties taken with the plot, it was rather slow and the main characters felt like cardboard cutouts, not fully dimensional flawed people. Here is a short synopsis of the book:

Their romance shaped a nation. The rest was history.

As battle cries of the American Revolution echo in the distance, servants flutter about preparing for one of New York society’s biggest events: the Schuylers’ grand ball. Descended from two of the oldest and most distinguished bloodlines in New York, the Schuylers are proud to be one of their fledgling country’s founding families, and even prouder still of their three daughters—Angelica, with her razor-sharp wit; Peggy, with her dazzling looks; and Eliza, whose beauty and charm rival that of both her sisters, though she’d rather be aiding the colonists’ cause than dressing up for some silly ball.

Still, she can barely contain her excitement when she hears of the arrival of one Alexander Hamilton, a mysterious, rakish young colonel and General George Washington’s right-hand man. Though Alex has arrived as the bearer of bad news for the Schuylers, he can’t believe his luck—as an orphan, and a bastard one at that—to be in such esteemed company. And when Alex and Eliza meet that fateful night, so begins an epic love story that would forever change the course of American history.

Obviously my biggest problem with this book was the historical inaccuracies. The entire plot with Livingston was completely plucked from nowhere, Eliza wasn’t engaged to anyone else before Hamilton as far as I’m aware and in fact Henry Livingston was already married by the point this action took place, if De La Cruz had wanted to introduce a romantic rival for Hamilton then she could have at least picked someone who in reality wasn’t married at the time. The stuff with Benedict Arnold did really happen (something I didn’t know about before reading this book) but there is no way that Hamilton would have deserted the army & even then he wasn’t actually given a command until 1781, the book has it a year earlier. Also the Schuylers actually approved of Hamilton, which was why Eliza was the only Schuyler sister who didn’t elope so the whole plot about him not being allowed to marry her because of his status was pure fantasy. Angelica had married John Church three years before, so she would have been married at the opening of the book, not halfway through, plus the author completely ignores the fact that the Schuylers owned slaves, despite the fact that Eliza professes her vehemence for the practice and desire for black and white people to be equal. Both Laurens and Lafayette were already married by this point, and De La Cruz portrays them both as bachelors who are interested in Eliza.  I can deal with a little creative license and I get that there isn’t much to draw from historically, since Eliza burned all Hamilton’s letters, but still, if you can’t get even the facts that we do know right, then you have no place writing a historical fiction novel. It did expand on some stuff that the musical left out, which I appreciated but that doesn’t take away from the many historical inaccuracies.

The chapters were relatively nice and short, and I liked the chapter titles, although I didn’t get the point of the little subheadings saying where each chapter took place, especially given that there weren’t all that many different settings in the book.

I did love the sibling relationship between the Schuyler sisters, their banter was great to see, although I felt like Angelica’s wit was dummed down somewhat to make Eliza seem like the smarter Schuyler sister, which wasn’t great, in fact I was kind of disappointed with how Angelica was portrayed. It was nice to see more of Peggy though, since she is barely seen in the musical.

I don’t really know much about Catherine Schuyler (the Schuyler matriarch) but she was made out to be really awful here. Still it was nice that Eliza’s older relatives were included in the story, since so often parents and other adult relatives are left out of YA books, I particularly liked her Aunt Gertrude, she was a hoot!

I will say that the story reads far younger than it is meant to, it’s meant to be for a YA audience, but the writing style and language choice suggests it was written for a younger audience.

There was also quite a lot of infodumping, I get that the author wanted to show she had done some historical research (though clearly not enough) but there were passages that were clearly there just to show what the author had found out about Hamilton and that kind of took me out of the story.

It was incredibly slow paced, not much happened for most of the book, I mean I get it’s a romance and that’s not what I usually read, but the whole book was basically just Alex and Eliza dancing around each other, and despite Eliza initially not liking Hamilton, she seemed to change her mind incredibly quickly. The dialogue was also a bit stilted and cheesy at times, in fact their entire romance came across as kind of cheesy to me.

Alex was a little more shy than I had expected, not at all like the over-confident Hamilton of LMM’s version of Hamilton, but I kind of liked that, I thought he was very sweet and endearing. I also didn’t know that Hamilton was ginger before reading this book! I did like Eliza but I felt De La Cruz was trying to portray her as the perfect woman and a lot of “not like other girls” stuff slipped through, which I didn’t love.

The attempted rape scene, in addition to being historically inaccurate, was entirely unnecessary to the plot and really should not have been included at all, considering that the whole thing was fabricated, De La Cruz could have found another way to get Eliza out of her engagement to Livingston.

The ending was far too rushed, Eliza and Alex are reunited, engaged and married all within 3 chapters and I couldn’t help but feel like if De La Cruz had lost some of the filler, then those parts could have been expanded on and it wouldn’t have felt like the book came to such an abrupt conclusion.

Overall, I did enjoy parts of Alex and Eliza but there were far too many historical inaccuracies and liberties taken for me to get fully invested in the story, and the pacing was incredibly lacklustre which meant it was hard to get into the plot. It’s not a bad book, but I feel like it would appeal more to a younger audience than the audience its aimed for due to the way the story is written and definitely for people who are less familiar with the actual history!

My next review will be of Enchantee by Gita Trelease, I’ll be publishing my e-ARC review of it on Sunday/Monday in time for release date on Thursday. My next read will be Hamilton and Peggy! A Revolutionary Friendship, my other read of Hamilmonth.