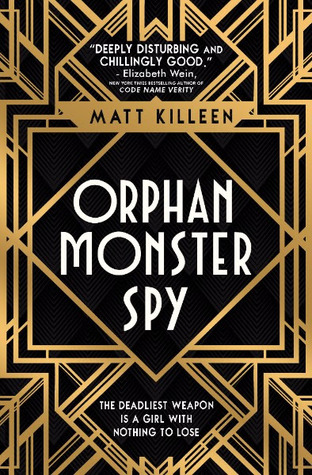 Thanks to Usborne for letting me have a free copy of this book, this in no way influenced my opinion of it.

I was approached by Usborne YA last year and asked if I wanted to review Orphan Monster Spy for the blog, I naturally was very excited because it was the first time I had really been approached to review a book by a publisher as opposed to the other way around. This book was also blurbed by Elizabeth Wein, whose books I have really enjoyed so of course that made me interested in reading this one. It sounded like something really interesting and different, and it definitely delivered on that, however it wasn’t quite as exciting as I was hoping for. The pacing was definitely off, it started off really exciting and threw you right into the action but then everything slowed down until right at the end when it got intense again. Here’s a short synopsis of the book:

After her mother is shot at a checkpoint, fifteen-year-old Sarah–blonde, blue-eyed, and Jewish–finds herself on the run from a government that wants to see every person like her dead. Then Sarah meets a mysterious man with an ambiguous accent, a suspiciously bare apartment, and a lockbox full of weapons. He’s a spy, and he needs Sarah to become one, too, to pull off a mission he can’t attempt on his own: infiltrate a boarding school attended by the daughters of top Nazi brass, befriend the daughter of a key scientist, and steal the blueprints to a bomb that could destroy the cities of Western Europe. With years of training from her actress mother in the art of impersonation, Sarah thinks she’s ready. But nothing prepares her for her cutthroat schoolmates, and soon she finds herself in a battle for survival unlike any she’d ever imagined.

I did like that this was a different take on a WWII story. Pretty much all of my historical fiction reading has focused on WWII, because that seems to be one of the most popular eras to explore in historical fiction (at least in YA) and so I’ve read a lot of takes on it by now, it’s difficult to find something original, but this was definitely something new.

Sarah was a very intriguing character, I liked how she used her acting and gymnastic training to help her out with her spy missions and how the book explored the intricacies of morality through Sarah, she initially thinks of herself as the hero and the Nazi girls as the monsters but it becomes clear throughout the book that the situation is far more complex than that, and that was really interesting. The problem was aside from Sarah, the other characters weren’t particularly well developed, the Captain was intriguing but he’s deliberately meant to be this kind of mysterious character, and we’re seeing him through Sarah’s eyes so we see what she sees. Still I think all of the side characters could have done with some more fleshing out.

The story does rely on a lot of conveniences, most of the time it feels like Sarah is incredibly lucky and she doesn’t really seem to do much spy work, she just kind of falls into the right solution.

There are some incredibly brutal and intense scenes which could potentially be triggering for survivors of abuse and sexual assault, so I just wanted to warn right off that this book is probably not suitable for younger teens. The sexual assault storyline seemed kind of gratuitous and I don’t feel like it was necessary

I liked Sarah’s relationship with the Captain and wished it had been explored more, though their motivations towards each other remain unclear, I’m still not entirely sure why Sarah wanted to stay on with the Captain and be a spy, when she could have quite easily got on the ship to Switzerland and sailed to safety. The Captain’s motivations are a little clearer, he needs Sarah in order to infiltrate the school, but it’s unclear why exactly he helped Sarah in the first place as initially he had not intention of using her for the mission.

I’m not Jewish, so I can’t speak authoritatively on the Jewish representation in this, but I did like that this was a WWII story with a Jewish main character where the focus wasn’t on the Holocaust. Obviously the Holocaust was a massive deal and is definitely something we need to talk about, but it was refreshing to read a story with a Jewish heroine at the centre that wasn’t about the Holocaust and I thought it was a sensitive portrayal of a Jewish girl in Nazi Germany.

The ending was incredibly anti-climactic, because of the slow pace throughout the story, everything feels really rushed and then it just comes to a very sudden conclusion. I hope that there’s a sequel to this book because it felt like there were a lot of unanswered questions and the story ends at the beginning of 1940, there’s five more years of the war, so plenty of scope for more stories for Sarah and the Captain.

Overall, this was a different take on a quite saturated area of historical fiction, but it didn’t quite reach the potential of it’s premise, I was expecting a more action packed spy thriller and it wasn’t quite that, but I did appreciate that the author tried something different with the traditional WWII story and I think there is great potential for future instalments of Sarah’s adventures, should the author choose.

BECHDEL TEST: PASS-Sarah does have conversations with the other girls at school about things that do not have to do with boys.

My next review will be of Moxie, by Jennifer Mathieu.