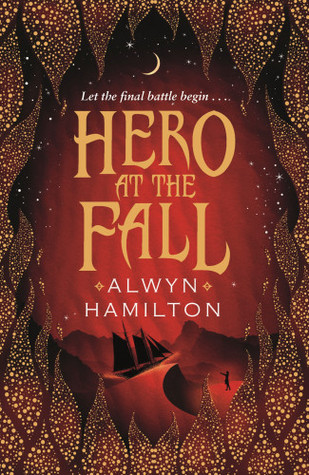 This was one of my most anticipated reads of 2018, I’ve been following this series since it started in 2016 and I was really excited to see how everything wrapped up. I’m sad to say I was really disappointed. I was expecting a really high stakes, high action finale and I’m not sure that I really got that. There was A LOT of buildup and the actual fight for the throne? Yup super short and not all that satisfying. This book could easily have been 200 pages shorter than it was and it showed. Here is a short synopsis of the book:

Once, in the desert country of Miraji, there was a Sultan without an heir.

The heir had been killed by his own brother, the treacherous Rebel Prince, who was consumed by jealousy and sought the throne for himself.

Or so it was said by some. There were others who said that the Rebel Prince was not a traitor but a hero…

In the final battle for the throne, Amani must fight for everything she believes in, but with the rebellion in pieces, and the Sultan’s armies advancing across the desert plains, who will lead, who will triumph, who will live and who will die?

I liked that we started off with a character roundup, there are a lot of them, and it was good to have a reminder of who our major players were, who was alive, who was dead etc. It was also great to finally have a map of Miraji, even if I wish it had been a slightly more detailed one!

The pace was incredibly slow! For most of the book, it felt like absolutely nothing was happening. There were a few action scenes, but they were few and far between and didn’t land as well for me as I would have liked them too. But seriously, this book is 47 chapters long and for at least 40 of those, I felt like not much was really happening. If they had retrieved Ahmed and Shazad and co earlier then I feel like it might have worked a bit better, but they didn’t even come back into the story until 25 chapters in. I felt my eyes glazing over so many times and that is never a good sign! A lot of the chapters were overly long for me as well, which didn’t help matters.

I felt like I couldn’t really connect to the characters as well this time around. I loved Sam, he was the saving grace of this story for me, his sass gave it some much needed levity! Amani seriously annoyed me in this book. I mean I get that she’s not a leader and she’s been thrown into this position that she really has no business being in but the girl can’t make a decision to save her life (sometimes literally) and I feel like this book undid a lot of the character development that she went through in Traitor of The Throne. I felt like a lot of their strategies just didn’t make sense and they were putting themselves into danger for danger’s sake. I also felt, even though Amani and Jin were together more in this book, their romance wasn’t anywhere near as convincing as it was in the first book. I really missed Shazad as well, she was one of my favourite characters in the series and I loved her friendship with Amani, but she was hardly there in this book.

At first I wasn’t so keen on how the “myths” in this book were actually just the stories of the characters but it became clear by the end why Hamilton had chosen to do this and I think it just about paid off.

It felt like the plot relied on a lot of conveniences, there was some very annoying Deus-Ex-Machina and a lot of things seemed to work out just because the author needed them to, rather than that they were natural developments of the plot.

There were quite a few deaths, it’s war, it’s bound to happen, but I didn’t feel like many of them had any real impact. It was just like “Oh yeah, someone has died again, move onto the next thing” and I don’t know if that was because of how the character reactions were written or if I just didn’t feel connected enough to the characters, but they felt flat to me.

The characters I felt were the most interesting, Shazad, Leyla, Zaahir (a new Djinn introduced in this book), were the most underutilized in this book which I thought was a shame. The last book spent so much time building up the dynamic between Amani and the Sultan and I actually liked that, and enjoyed the Sultan as a villain so it felt like a shame that this book kind of discarded all of that.

We had characters returning from previous books, like Noorsham (who I’ll be honest, I thought was dead) and Amani’s aunt, but they kind of just popped up and then left again, didn’t have any real impact.

There was a sex scene between Jin and Amani and I have to say, I kept rolling my eyes the entire time. Look, I cannot claim to be anything of an expert on the subject, in fact I am as inexperienced as Amani, but I’m pretty sure that sex is not like explosions and magic? Isn’t it pretty messy? I don’t know, just doesn’t feel very realistic to me. The only thing that felt realistic was the clumsy way Amani hit her head on the lantern, because that is totally something I don’t know. Just for once I would like to read a sex scene in a book that isn’t like the BEST SEX EVER, especially when one of the partners is a virgin, because I don’t know about you guys, but I’m pretty sure I have no idea what I’m doing when it comes to sex! I’d say it was weird that they had sex after basically avoiding each other for the entire book just because they thought they were going to die, but thinking about it, that seems like a pretty natural reaction.

The battle was kind of anticlimactic? It felt like the entire book and series had been building up to this moment and it just passed by in one chapter? Plus I’m still not entirely sure what happened? I was expecting the whole thing to go out with a bang and it was more of a fizzle. The last chapter acted as an epilogue of sorts and I’m not entirely sure how I felt about it. On the one hand, it was nice to see how all the characters ended up, but on the other, I felt it was a little long and I didn’t necessarily need to see where everyone was 10, 20, 30, 40, 50 years from then. I could have pictured that for myself.

Overall, this was a lacklustre finale, to a series that had a ton of potential, but didn’t necessarily reach all of it. Still, this is Alwyn Hamilton’s first series and I’m sure that as she writes more, the potential that was shown in this series will be fully reached. I’m just disappointed that I didn’t love this final book as much as I had wanted to.

BECHDEL TEST: FAIL-It truly pains me to say this, but any conversation between the named female characters in this book (and there are more than two) always comes back to a man, whether it’s Jin, or Ahmed or the Sultan.

My next review will be of Language of Thorns, which I will have for you very soon as these are April reviews I’m catching up on that I didn’t have time to write in April because of my exams.