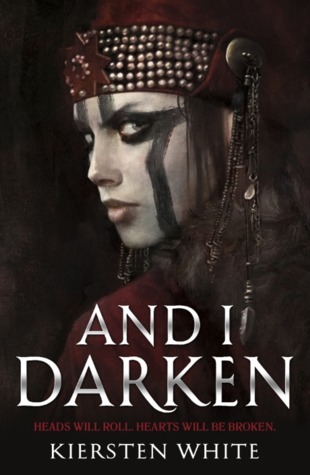 Book: And I Darken (The Conqueror’s Saga #1)

I was really excited for this book as I’d heard such great things about it, that it had a lot of stabbing, that the female main character was very fierce and that it was generally a great read. However, I found myself struggling to read it, it took me three weeks to get through which is slow even for me, especially with a 400 page book, three+ weeks is usual for me for 600+ page books, but  not for something like this. It was just incredibly dense, both the prose and the story itself and whilst I was promised a stabfest, what I actually got was a political yawnfest. Here is a short synopsis of the book:

No one expects a princess to be brutal. And Lada Dragwyla likes it that way.

Ever since she and her brother were abandoned by their father to be raised in the Ottoman sultan’s courts, Lada has known that ruthlessness is the key to survival. For the lineage that makes her and her brother special also makes them targets.

Lada hones her skills as a warrior as she nurtures plans to wreak revenge on the empire that holds her captive. Then she and Radu meet the sultan’s son, Mehmed, and everything changes. Now Mehmed unwittingly stands between Lada and Radu as they transform from siblings to rivals, and the ties of love and loyalty that bind them together are stretched to breaking point.

The first of an epic new trilogy starring the ultimate anti-princess who does not have a gentle heart. Lada knows how to wield a sword, and she’ll stop at nothing to keep herself and her brother alive.

The premise sounded amazing, a genderbent retelling of Vlad The Impaler? Sign me up! However the book didn’t really live up to the promise of its premise. There was a lot of dense political talk and romance and religion, but not exactly very much of Lada being stabby and vicious, at least not as much as I was expecting.

The story was VERY slow. It moved at an almost glacial pace throughout, even when they arrived at the Sultan’s court, it’s still incredibly slow. That combined with all the politics, the dense prose and the large focus on religion made it a struggle to get through. I mean I appreciated seeing the religious aspects, as religion is too often glossed over in YA, but this in combination with the politics and the dense prose really did not work. I can’t speak to how good the Islam representation was, but it is there, if there are any Muslim reviewers reading this who have read the book, I’d love to know what you thought about the rep in this.

I actually lost track of how old the characters were, because there was so much skipping about in time. First they were kids, then they were 10 and 11 then loads of time skipped and they’re suddenly like 15 and 16, but they felt a lot younger? I don’t know, it just bugged me a little, because I always felt they were a lot younger than they actually were, so some of their actions didn’t make complete sense to me.

I did like Lada, but she wasn’t quite what I was expecting. I was expecting her to be really, really vicious and she was sometimes, but nowhere near to the level that I wanted her to be. I also didn’t like how she seemed to do a complete 180 when she fell for Mehmed. Still I did like that she was fierce and knew her own mind and beliefs and stuck to them that was great. Radu was sweet and I liked him at first but once the whole Lada/Mehmed thing started, he got all jealous and brooding and I wasn’t such a fan? I also didn’t believe that Mehmed could be that dense about Radu’s feelings for him, I think he’s using him.

I really hated that it had to be constantly emphasised how ugly Lada was. Like I get you need to show that she can’t rely on her looks but I don’t think it was necessary to be reminded every other page how ugly she was.

Mehmed really bothered me. I didn’t get why he wanted Constantinople so much and it honestly seemed like he was just using both Lada and Radu. He had his harem, he didn’t need Lada and yet he keeps her around just because he wants her. Honestly it felt like he was emotionally abusive to both of them and I didn’t really like that.

There is LGBTQ+ representation which I liked, because it’s not something you see very often in historical fiction, especially not in this time period, but there is a bit towards the end that utilises the “bury your gays” trope. That really disappointed me because I had thought the rep was okay up until that point.

The plot wasn’t particularly coherent and didn’t really seem to have a point until right up at the end. I will admit I really loved the climax, especially with what happened to Lada’s character. I was just expecting far more action throughout the book and I didn’t really get it.

I have seen some reviews from native reviewers, Romanian in this case, who have said that they weren’t pleased with the representation of their history, so that’s something to take into account when choosing whether to read this book.

Some of the chapters were definitely a little overlong, which contributed to the lagging pace.

Overall, it’s not a terrible book, but it could have been so much better. Lada was great, but most of the other characters I didn’t really get along with, the plot was slow, it was very dense and generally just not particularly easy to read. This would be great for anyone who likes historical reads, packed with politics and religion but not so much for lovers of action packed, fast paced reads like me.

The next book I will be reviewing is Heidi Heilig’s The Girl From Everywhere, as my #RockMyTBR book for October. Also I promise guys, my September Update is coming, I will hopefully have it up for you tomorrow!