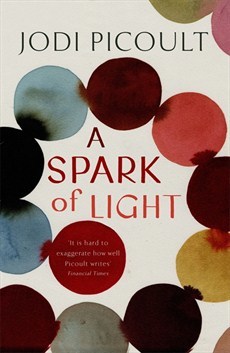 Book: A Spark of Light

Thank you to Hodder & Stoughton and Netgalley for allowing me to read this book early, this was one of my most anticipated releases of 2018 since I have been waiting for Jodi Picoult to do a book about abortion for a long time and I was not disappointed with the results, A Spark of Light is an emotional, nuanced look at a very difficult topic and allows the reader to explore all the different angles of the debate in a very personal way as we follow the characters at the clinic through a very traumatic day, from end to beginning. Here is a short synopsis of the book:

The warm fall day starts like any other at the Center—a women’s reproductive health services clinic—its staff offering care to anyone who passes through its doors. Then, in late morning, a desperate and distraught gunman bursts in and opens fire, taking all inside hostage.

After rushing to the scene, Hugh McElroy, a police hostage negotiator, sets up a perimeter and begins making a plan to communicate with the gunman. As his phone vibrates with incoming text messages he glances at it and, to his horror, finds out that his fifteen-year-old daughter, Wren, is inside the clinic.

But Wren is not alone. She will share the next and tensest few hours of her young life with a cast of unforgettable characters: A nurse who calms her own panic in order save the life of a wounded woman. A doctor who does his work not in spite of his faith but because of it, and who will find that faith tested as never before. A pro-life protester disguised as a patient, who now stands in the cross hairs of the same rage she herself has felt. A young woman who has come to terminate her pregnancy. And the disturbed individual himself, vowing to be heard.

Told in a daring and enthralling narrative structure that counts backward through the hours of the standoff, this is a story that traces its way back to what brought each of these very different individuals to the same place on this fateful day.

Jodi Picoult—one of the most fearless writers of our time—tackles a complicated issue in this gripping and nuanced novel. How do we balance the rights of pregnant women with the rights of the unborn they carry? What does it mean to be a good parent? A Spark of Light will inspire debate, conversation . . . and, hopefully, understanding.

Jodi Picoult’s writing is always great, emotional and powerful and that was true of A Spark of Light as well, but I wanted to draw particular attention to the opening of this book in my review because I thought it was really great-we come in at the end of the hostage situation, so I found it very impressive that within the opening paragraph, I was already feeling for the characters and the situation they had found themselves in and wanted to know more about how they got there.

There’s quite a large cast of characters and the perspective shifting did take a little time for me to get used to, but I appreciated that there were so many different characters, because you get to see such a wide range of perspectives. My personal favourite was Dr Louie Ward, the Catholic abortion doctor, who rather than his faith preventing him from performing abortions, it reinforced his belief in choice. It was a perspective that I can’t say I’ve really seen before, and it was nice to see a religious person also believe in choice as so often it is presented as an either/or scenario in media, so it was nice to have a book that didn’t show the two as mutually exclusive. The fact that this character is based on a real abortion doctor, made me love him even more.

We also have Wren, a fifteen year old girl, her father Hugh and her aunt Bex. Wren and Bex are caught in the shooting, Hugh is the hostage negotiator. I loved how Hugh and Wren’s bond was shown throughout the story, their father/daughter bond was very heartwarming and seeing how his bond with his daughter affected how Hugh negotiated with the hostage taker was very interesting. I liked how father/daughter relationships were central to this book, as the hostage taker’s motives are very much tied to his own daughter and it was interesting to see how the two relationships contrasted. I also liked that through Olive (an older woman at the clinic) and Wren, Picoult explored the other services offered by women’s health clinics as abortion is so often the focus that people forget these places provide other vital services as well.

Janine was a particularly interesting character for me, she is a pro-life advocate who comes to the clinic as a spy, trying to find evidence that the clinic was coercing women into having an abortion. I’m pro-choice, so my initial instinct towards her was slightly sceptical as I often feel that pro-lifers are kind of hypocritical, but I did come to feel for her as more of her backstory was revealed through the book, even if I don’t necessarily agree with her ideas.

I really loved Izzy, she had such gumption, she wasn’t afraid to stand up and do what was right in order to help people, even if doing so would get her killed and she stayed impressively level headed through the crisis. Her conflict between her own poor upbringing and her boyfriend coming from a wealthy family felt incredibly realistic and it was interesting to see how this conflict contributed to why she ended up at the clinic-one of my favourite twists of the novel, because I really didn’t see it coming. I also felt incredibly for Joy and Olive, as their journeys to the clinic were quite emotional.

Interspersed with the clinic story, is the story of a young girl who performed an illegal abortion by taking pills at home (in Mississippi, it is illegal to have an abortion without the presence of a doctor). At first, I was kind of confused as to why this story was included but it becomes clearer the further through the book you get and is actually vital to what is happening at the clinic. Beth’s story actually made me really mad, it’s these kinds of things that make it really hard for me to understand pro-lifers, because without the option of choice, women resort to desperate and often unsafe ways to end pregnancy. I felt really sorry for Beth, especially that she felt she had no other option than to risk her own life in order to exercise her right to choose, which should have been freely available to her.

I think Picoult did very well at explaining the shooter’s motivations, though he was easily my least favourite character in the book (obviously), it is clear why he did what he did and his love for his daughter was endearing, even if he did not really show it in the right way.

As much as Picoult obviously attempts to balance both sides of the issue, it is quite clear which side of the debate she lands on, and the pro-life characters, with the exception of Janine and George, do come across as more caricaturish than the pro-choice ones. However, I did like that the book never felt preachy, all characters are given the chance to show their viewpoints and it’s up to the reader to decide which they agree with.

The reverse chronology, I know will be hit or miss with most people. I did find it confusing initially, particularly at the points in each chapter when the timelines intersect going into the next hour (which you have already read) but I actually ended up enjoying it-telling the story this way means you get to learn about the characters and their situations as you go through and by the end I had real empathy for all of them. You get little tidbits in each section about something that happened earlier in the day that you will then learn about, and far from decreasing the tension, I found that knowing the ending first actually increased the tension for me because I really wanted to know what had happened to the women in the clinic to bring them to that point.

I did feel like the chapters were a little overly long, most of the sections were 20+ pages long and as someone who likes to read before I go to bed, that’s a bit long for me. It might have been better if each section was broken up a little more, so that you weren’t facing such a huge chunk of text in each section but that could just be me!

Jodi obviously meticulously researches her books, and I definitely feel like I know a lot more about Mississippi abortion laws after this book, I love that I always come out of her books knowing things that I didn’t know before-although a lot of the real life information she used in this book made me very angry considering it shows how little respect lawmakers have for women’s right to choose. I also particularly loved the author’s note of this book, where she goes into her research process a little and talks about what motivated her to write this book, it was incredibly powerful and I would advise anyone who doesn’t usually read the author’s note to definitely do so this time.

The section where an abortion is performed is rather graphic, I wasn’t expecting Jodi to go into so much detail and I did find it a little unsettling but that’s more because I’m slightly squeamish than anything else, and I’m quite glad she did include it because I have knowledge about the process now that I didn’t before.

Jodi Picoult’s books always come with a healthy dose of mind blowing twists, and this book was no exception, although I actually predicted one of the major twists myself this time, which made me very happy as I don’t usually do it! The end of the book in particular had me with my mouth hanging open, because I really wasn’t expecting that at all.

There were some uncorrected proof errors, but that was only to be expected and I’m sure these have been edited in the final version.

I will admit, I did find the epilogue a little frustrating-I would have liked to find out what happened to each of the women who survived the hostage situation, though I do appreciate that the cliffhanger from the first chapter was resolved, it didn’t leave me as satisfied as I would have liked. However, the story is about what brought the women to the clinic rather than what they do after, so I understand why Picoult chose not to go down this route, I just prefer to have everything all wrapped up and the ending was a little too open for me.

BECHDEL TEST: PASS-It would have been very surprising if this book hadn’t passed, considering the subject matter, many named women in this book speak to each other about topics which weren’t about men.

My next review will be of my final #RockMyTBR book of the year, though I have changed it from Wonder Woman: Warbringer to Our Dark Duet as I wasn’t feeling too engaged with the former and am enjoying the latter far more.