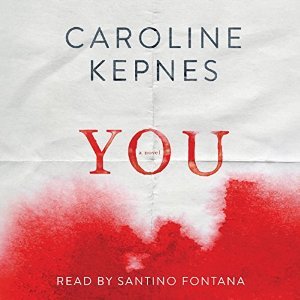 BECHDEL TEST: FAIL-By this book’s very conceit, it fails, I mean a book about a stalker passing the Bechdel test? That would be incredibly ironic. Anyway, since this book is narrated by Joe, in a second person perspective, there’s really no way for it to ever pass.

Ever since I watched the TV show on Netflix at the end of last year, I’ve been intrigued by You. I really enjoyed the show, but the book is very different to anything else I usually read, and I wasn’t entirely sure if I’d like it in book form. I decided to try it on audio, since I found the narration the most interesting part of the show, and I’m glad I did because I honestly don’t think I would have finished it if I’d read the physical book. I loved Santino Fontana’s narration, and found the second person perspective interesting, but Kepnes’ writing style I could take or leave.

When a beautiful, aspiring writer strides into the East Village bookstore where Joe Goldberg works, he does what anyone would do: he Googles the name on her credit card.

There is only one Guinevere Beck in New York City. She has a public Facebook account and Tweets incessantly, telling Joe everything he needs to know: she is simply Beck to her friends, she went to Brown University, she lives on Bank Street, and she’ll be at a bar in Brooklyn tonight—the perfect place for a “chance” meeting.

As Joe invisibly and obsessively takes control of Beck’s life, he orchestrates a series of events to ensure Beck finds herself in his waiting arms. Moving from stalker to boyfriend, Joe transforms himself into Beck’s perfect man, all while quietly removing the obstacles that stand in their way—even if it means murder.

So as I said at the top of this review, I really enjoyed the narration for this one. I’ve been really lucky with audiobook narrators in my admittedly relatively short time listening, but I think Santino Fontana is my favourite yet. He’s brilliant at accents and he captures Joe’s creepy douchebaggery perfectly. Even when I wasn’t loving the writing, which was admittedly quite often, Santino’s narration kept me going, his performance was so good.

When it comes to the writing, I’m somewhat torn. I did like the use of the second person perspective, I thought that was a really good idea and definitely added to the creep factor of the book. However, because of Joe’s character, the writing was somewhat vulgar (a lot of use of the C word which I really didn’t like), and quite repetitive. Also this may be a very personal thing, but Joe refers to “panties” a lot, and it made me shudder every time it was mentioned. There’s also quite a lot of explicit sex, which I think was definitely toned down for the show and I much preferred it that way than how it was in the book.

Obviously the characters are all extremely messed up. Joe is obviously the worst culprit, being that he’s a legitimate psychopath, I felt like the show humanised him more, the book was a lot more raw in how awful Joe was and it’s a lot harder to sympathise with him than in the show, which I think is good given that he is EVIL (this is not to say that the show makes him look good, it definitely doesn’t). Having said that, Kepnes is very good at showing how Joe acts convincingly normal, so you can see somewhat how Beck falls for his act.

Beck is quite an interesting one, because she’s not the “ideal victim”. Beck is selfish, and vain and attention seeking, the kind of girl that is always labelled as “asking for it” and I like that Kepnes did that, because no matter how many issues Beck has (and she has many), what Joe does to her is WRONG and I always think these kinds of stories are more interesting when they don’t follow society’s idea of a “perfect victim”. I will say though, that because we are in Joe’s head, we get a very one sided view of who Beck is and she’s not given the chance to develop as much, which I think is a shame.

The side characters are also woefully underdeveloped, since Joe only really has eyes for Beck. Peach could have been really interesting and I feel like the show explored that a lot more. The show uses her more as a foil for Joe, but in the book she’s basically just a vapid, selfish girl with not much else to her personality. It’s also not great that the only lesbian character in the book is villainised for having an attraction to her friend (though she does sexually assault Beck at one point, which is not okay).

I didn’t really understand how Joe kept getting away with everything, a good stalker he may be, but he was not a very good murderer and there really should have been enough evidence for the police to put him behind bars if they had really looked into any of his murders.

I also didn’t think the book needed to be as long as it was, it kind of lagged in the middle, there was a lot of repetition of the same events over and over again, and I reckon had it been a bit more streamlined, it would have been a more enjoyable read. I also felt like it was slightly overloaded with pop culture references, most of which were quite dated!

The ending fell a bit flat for me as well, it was pretty predictable, there was really only one way this story was going to end (which I think I could have worked out, even if I hadn’t seen the show before reading) and I found it a bit anti-climactic. I suppose there’s no really satisfying ending to a book like this, but I just felt a but underwhelmed by the way this one worked out.

Overall, I liked this book, but I think this is one of the rare times where the TV show was actually better than its source material. I really enjoyed the narration, and the plot was mostly engaging but the writing and the length somewhat let down the rest of the book for me. I probably will still read the second book, but I’m not going to be rushing to do it before Season 2 of the show comes out in December.

My next review will be of my August #RockMyTBR book, which will probably be up at the beginning of next month.