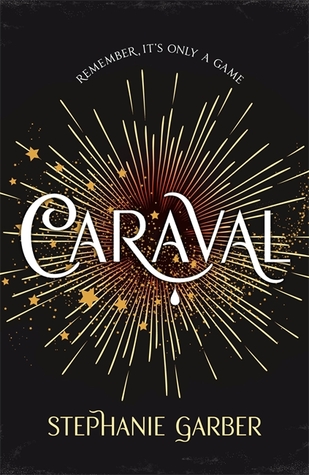 Published By: Hodder and Stoughton

As always, thanks to Netgalley and Hodder and Stoughton for allowing me to read this book.

This has been a much hyped book for months, and it was only published four days ago, so naturally when I received it for review, I was both very excited, and very nervous in case I didn’t find the book as brilliant as everyone else seemed to have. Thankfully, despite a slightly rocky start, I ended up really enjoying Stephanie Garber’s debut offering, it was a magical, mysterious, wonderful world, with interesting and complex characters and I can’t wait to see what the next book has in store! Here is a short synopsis of the book (in case anyone has totally missed the hype and has no idea what the book is about!):

Whatever you’ve heard about Caraval, it doesn’t compare to the reality. It’s more than just a game or a performance. It’s the closest you’ll ever find to magic in this world . . .

Welcome, welcome to Caraval―Stephanie Garber’s sweeping tale of two sisters who escape their ruthless father when they enter the dangerous intrigue of a legendary game.

Scarlett has never left the tiny island where she and her beloved sister, Tella, live with their powerful, and cruel, father. Now Scarlett’s father has arranged a marriage for her, and Scarlett thinks her dreams of seeing Caraval, the far-away, once-a-year performance where the audience participates in the show, are over.

But this year, Scarlett’s long-dreamt of invitation finally arrives. With the help of a mysterious sailor, Tella whisks Scarlett away to the show. Only, as soon as they arrive, Tella is kidnapped by Caraval’s mastermind organizer, Legend. It turns out that this season’s Caraval revolves around Tella, and whoever finds her first is the winner.

Scarlett has been told that everything that happens during Caraval is only an elaborate performance. But she nevertheless becomes enmeshed in a game of love, heartbreak, and magic with the other players in the game. And whether Caraval is real or not, she must find Tella before the five nights of the game are over, a dangerous domino effect of consequences is set off, and her sister disappears forever.

First off, I loved, loved, loved the map at the start of the book. I’m a total sucker for a book with a beautifully drawn map in it and this book was no exception. It was great having the map there, because it meant I could picture where everything was in Caraval.

I found the book a little slow to start with, Scarlett seemed kind of bland, there were a lot of mysteries introduced and random anecdotes about Caraval that Scarlett had learned from her grandmother, and lots of letters Scarlett had sent to the master of Caraval. I just found everything a little confusing to start off with, we were just thrown into this world with little introduction, but as the story went on and Scarlett’s character developed, I found myself being more and more drawn into the book.

I guess first of all I should talk about Scarlett since she was the main character of the book. She seemed very bland to me at first, she was quite meek, a rule follower, perfectly happy to simply go along with marrying this guy she had never even met, she’s incredibly overdramatic as well. However this all makes sense given her horribly abusive father, and I loved how slowly throughout the book as she gets more entrenched in Caraval, she becomes more daring, more determined, more independent and it’s just lovely to see her flourish through the book. Whereas at the beginning I felt a little indifferent to Scarlett, by the end I was truly rooting for her. Also her love for her sister is inspiring and it leaps off the page which was great and I liked that Scarlett and Tella had such contrasting personalities. I found the way that Scarlett felt in colours very strange though, I know the author likely did it to add to the imagery of the book, which is great and everything, it just seemed a little weird to me.

I loved the setting, everything about Caraval just screamed “magic”, and Stephanie Garber’s writing was so beautiful and vivid that it felt as if Caraval was coming to life as I was reading it, all the tunnels and shops and the carousel and the roses and everything just sounded so beautiful that I instantly fell in love with it. It’s strange, I usually don’t like overly descriptive writing, but I loved it here, it just fitted so well with the setting and it never felt over done or anything, it just added to the magical feel of the book. All the aesthetics are so beautiful, it’s a very visually pleasing book!

I wasn’t sure about Julian at first, but as with Scarlett, I grew to really like him by the end of the book. He was mysterious and intriguing and cheeky and charming but there’s also a softer, kinder, more vulnerable side to him and I loved how much he clearly cared for Scarlett. It kind of frustrated me how long it took to learn his secrets, because he’s clearly hiding something all the way through, but in the best way possible because the pay off was so good when I finally found it out! He is definitely a new book boyfriend!

I also really enjoyed the romance. I liked that it was there, but not in the forefront, Scarlett’s personal development felt like it was the driving factor of this story which was great. It was a really nice, seductive, slow burn romance, exactly the kind that I love, there was no instalove, it was just these two people, getting to know each other, then trust each other and eventually falling in love, which is exactly the way it should be in my opinion.

Much as I loved Scarlett’s love for her sister, I did wish the two of them had more scenes together, as I would like to have seen more of their sisterly relationship, rather than just being told through Scarlett how much she loved her sister. I get that this wasn’t really possible given that the whole point of Scarlett playing Caraval is to find her sister, but I just would have liked to have seen more of their relationship, especially since I really liked Tella so it would have been nice to see more of her character.

The chapters were pretty short and there was a lot of twists and turns throughout the book, so basically once Scarlett and Julian got into Caraval, it was pretty much full on right until the end. I loved all the twists and turns throughout the game, it made it feel more real, that it wasn’t simple for Scarlett to find Tella, she had to really work for it.

I also loved all the world building, through the book you get a real glimpse at the history of Caraval, and that just added to sense of mystery and intrigue about the game.

The ending was mean! Just when I thought everything was going to be wrapped up and everything would be okay, that ending happened and now I just need to know what’s going to happen next!

I don’t really want to say much more as I could being getting into spoilery territory soon, so let me just say that it’s a beautifully crafted, wonderfully written story, with amazing characters and an incredibly vivid and engaging setting. Magic practically drips off the pages, so if you love vivid worlds, magic, interesting and complex characters and incredibly pretty writing (plus a gorgeous map!) then this is the story for you! I’m so excited to see what happens in book 2!

My next review will be of my current read The Crown’s Game, so stay tuned for that!