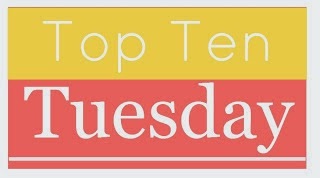 Hey everyone! I’m back with another Top Ten Tuesday, courtesy of the lovely ladies over at the Broke and The Bookish. This week’s topic is books that I love but don’t feel like I talk about enough or haven’t talked about in a while, and I think it’s a really great topic because whilst I’m usually pretty vocal about the books that I love, I know there are some that I don’t talk about as much as I should. So here we go, the books I love but that I don’t talk about enough:

This is one of my favourite books and I know I’ve done a Friday Favourites post on the series, but I don’t feel like it’s one that I talk about constantly, like the Harry Potter series, or the Unwind books, or the Percy Jackson books. It’s an old book, so I feel like it’s not one that people talk about all that much, but it’s truly amazing! If you haven’t read it then you definitely should.

I think I’ve mentioned these in maybe one TTT post before but other than that I haven’t really talk about them at all, which is terrible because it’s such a great series and I literally flew through all of the published books at the time. Basically it’s set in a school kind of like Hogwarts but instead of training wizards, they train young criminals. It’s pretty damn awesome!

I’m not sure if I’ve even ever mentioned that I’ve read these books! They’re great books though, there’s three so far, and it’s about Kat Bishop, a girl who comes from a family of thieves and her friends who are also all thieves and in each book they pull off a different con and it’s always really cool to see how they do it.

I know I’ve done a Friday Favourites post about this one and I’ve mentioned it in a TTT, but it’s not a book that I constantly gush about. It’s a really sad story, but it’s one that needs to be told and I think all teenagers should read this book because it’s a great example of how even the smallest of your actions can affect someone.

I know I’ve mentioned in passing that this book is one of my favourites, but I’ve never really talked about it at length. It’s one of the most beautiful, heartbreaking books that I’ve ever read, not to mention really unique, I’ve never read anything like it, plus the movie, which could have gone so horribly wrong, is surprisingly pleasing. I cannot urge people enough to read this book, it will cause you pain, but it is so worth it!

One of the few classic books that I genuinely love and yet it’s not one that I talk about very often. This is the quintessential book for horse lovers, so if you love horses and you haven’t read this one then you definitely should.

Another horse book that’s one of my favourites and I don’t talk about all that often, probably because I read it before I started blogging. It’s a really lovely story though, it was a favourite when I first read it as a younger teenager and it’s a story that has stuck with me, so it’s definitely worth a read.

8. A Series of Unfortunate Events-Lemony Snicket

I devoured these books when I was younger, I remember borrowing them from my local library, they’re so sinister and creepy and yet so totally enjoyable and I honestly think reading those set the tone for a lot of books that I’ve loved today (like the Unwind books), so I really should talk about them more.

This was a book I read as a kid, so it’s not exactly unsurprising that I don’t really talk about it that much, but it is one that I really loved at that age, so I should definitely talk about it more.

As a horse crazy pre-teen I loved these books! I probably wouldn’t like them as much if I read them now as they’re kind of simplistic, but they were among my favourite books to read as an early adolescent.

Aside from doing the one review of a book in this series, I haven’t really talked about them much as I read most of them before I started blogging, but I do really like them, it’s all adventures of a young Sherlock and I love how Andrew Lane shows hints of the character that we all know and love and yet still manages to develop young Sherlock as his own person.

Again, I devoured these books as a pre-teen. I regret the fact that I grew out of them before I finished the series, but the ones that I did read I really loved, like A Series of Unfortunate Events, I used to borrow them all from the library.

I went a little over ten this week, but this was restraining myself, I could have included more! Does anyone share any of the books on my list? What books were on your list this week? Let me know! The topic next week is ten of my most recent five star reads, but I haven’t had many five star reads recently, so instead I’ve decided to do Books I Just Had To Buy, But Are Still Sitting On My Bookshelf, as I think that will be a lot easier for me! That’s next week, but in the meantime, I should have some new posts for you guys soon, so stay tuned!