Hi everyone! I’ve actually had a reasonably okay summer, sure it wasn’t exactly what I’d thought (missing out on YALC was definitely a big disappointment) but I managed to make the best of it, I was able to see my friends a few times, I had a really nice birthday, I was able to go back to riding and we even got up to Scotland for a few weeks. I’m very worried about the potential new changes to our restrictions though, the idea of not being able to see my friends for another extended period of time is honestly quite terrifying. But anyway, enough with the doom and gloom, it was the Autumn Equinox yesterday, so that means it’s time to wrap up Northern hemisphere Summer (or Summer 2.0 if you will) here on the blog and look forward (as much as I can look forward to anything in the current state of things) to Autumn. This post will cover 20th June-21st September:

Image From This Summer: 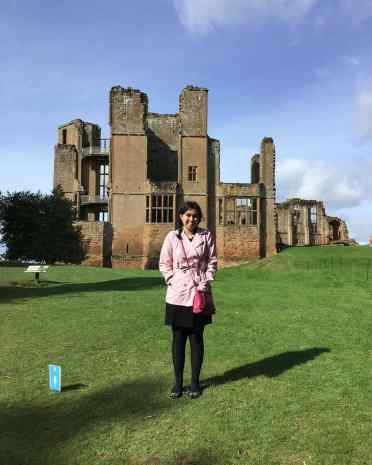 For the first time in months I actually have new photos to share! This is me at Kenilworth Castle on my birthday a couple of weeks ago.

Favourite Quote From A Book You Read This Summer:

“Most women suffer thorns for the sake of the flowers, but we who wield power adorn ourselves with flowers to hide the sting of our thorns” -King of Scars, Leigh Bardugo

This kind of reminds me of a very similar quote from Stalking Jack The Ripper about flowers and thorns, but it’s still one that I really like, I think flowers and thorns are a pretty good metaphor for the relationship between women and power and our perceptions of them.

This Summer In One Word:

Most Popular Review of The Summer:

I read 12 books this summer and reviewed 11 (one was a novella that I didn’t feel I had enough to say about to review). Unsurprisingly given the level of hype surrounding it, the most popular of these was the Hunger Games prequel, The Ballad of Songbirds and Snakes:

This summer was kind of a mixed bag again, I read some really great books and some not so great ones. There were three that stood out above the rest to me and it was really tricky to choose between them, but in the end I went for these two:

My most recent read, an unexpected delight of a thriller that actually surprised me from beginning to end! I look forward to seeing what happens with Ravi and Pip in the second book, when I get it.

I wasn’t expecting to enjoy a Cinderella retelling so much since it’s not usually one of my favourite fairytales, but Kalynn Bayron put a great spin on hers and I ended up really loving it.

Again, I’ve not got a massive amount planned this autumn, and considering that everything I do have planned could go out the window due to the restrictions changing, I’m again going to share the TV I’m planning on watching, since that is literally the only thing I can be certain about at the moment!

My top two most popular blog posts this time are both reviews which was a nice surprise, it’s nice to see some of my reviews getting a bit more love!

I posted this one in 2018, so it’s nice to have seen some renewed interest for it in the last few months!

Evidently, there are a lot of Leigh Bardugo fans among my followers as this was one of my most popular posts in my last Quarterly Rewind as well!

This Top Ten Tuesday was all about Authors That I’d Like To See At Next Year’s YALC and I’m not surprised it was really popular as I know a lot of other book bloggers missed having YALC this year as much as I did, so it was nice to share the love and look forward to (hopefully) YALC next year.

I was talking about the Longest Books on My TBR for this Top Ten Tuesday and was very heartened to see in the comments that I am not the only one who is intimidated by very long books! I have read exactly zero of these books since I did that post, so nothing has changed there!

This was my topic from last week, cover topics always do really well for me, I should do them more often really! It was a cover freebie and I talked about my favourite covers of 2020 as this year has blessed us with a lot of really beautiful books.

Four Posts I Enjoyed On Other Blogs This Summer:

2. I’m sure most of you have probably already seen Becky Albertalli’s heartfelt coming out letter on Medium. I have to admit, I’ve actually not read Becky’s books but I’ve seen a lot of the discourse around her in the last few years and it sucks that she felt she had to come out because so many people just assumed she was straight.

3. This is a video rather than a blog post and it technically comes under last month’s time period but as I didn’t share it then, I wanted to share it now. Nic Stone did a series of videos talking about race and I found this one with Jodi Picoult particularly informative.

4. I read this article in The Atlantic about how the coronavirus pandemic is changing attitudes towards people who are childfree and as someone who doesn’t want kids, I found it quite an interesting read.

Five Shows That I Enjoyed This Summer:

I did do more this summer but it was mostly pretty casual hangouts with friends, so I thought I’d share the best things I watched once again (I’ll know this pandemic is over when I can once again come up with five exciting things I’ve done to fill this section once more!).

As I mentioned earlier in this post, I really enjoyed Lucifer’s first instalment of Season 5 episodes, the show really has gone from strength to strength since it moved to Netflix (and I loved it before) and I can’t wait to see how the second half of Season 5 turns out!

Another one I mentioned earlier in this post, I really enjoyed watching the miniseries Mrs America back in July. The acting’s brilliant, the costumes are great and I learned a lot that I didn’t know before.

3. All Creatures Great and Small

I never saw the original series based on James Herriot’s books, since it came out in the 70’s, but I’ve been really enjoying Channel 5’s remake! My dad used to read James Herriot’s books to me when I was a kid, and this series has been just the comfort I’ve needed recently!

On my sister’s recommendation, I ended up watching the whole of Parks and Recreation over August and though I struggled with the initial seasons, I ended up really enjoying it!

A highlight of the year has been Hamilton being on Disney+ and it definitely lived up to expectations!

Six Songs I Listened To Way Too Often This Summer:

Of course my favourite song from folklore has had a fair few listens at this point! Her ACM performance of the song was also a delightful treat.

Probably my second most played song from folklore thus far.

I told you I’d been listening to folklore a lot!

The Waitress soundtrack is one of my favourites, so naturally it comes up a lot on my shuffle and this early number from the show is a great one.

5. It Only Takes A Taste-Waitress

This is such a cute duet.

I love this mashup more and more every time I listen to it!

So there we go, that was my Northern Hemisphere Summer! What have you enjoyed most on my blog this summer (or winter if you’re in the southern hemisphere)? What have you been up to? Let me know in the comments!