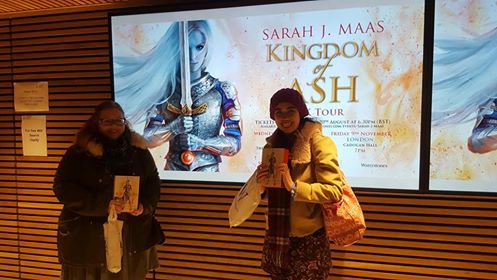 Hi all! I know, an event recap two months after the last one, what is this madness?? Back in August when Sarah J Maas announced her two UK dates for her Kingdom of Ash tour, Nicola and I immediately leaped at the opportunity to get the chance to see her again, this time in Edinburgh (when we saw her two years ago, it was in Glasgow).

We got the train from Stirling at around 5 to get in for the event at 7 (it was earlier than we needed to, but we wanted to make sure we got there in plenty of time), after having stopped at Subway on our way into town for dinner. I also got a Salted Caramel Hot Chocolate from the station, it was AMAZING, I wish Christmas drinks were available all year round! I had brought a book to read on the train, but Nicola and I spent the journey excitedly chatting about the event: she had already read Kingdom of Ash (I’ve only just started! I promise Nicola, I will finish it as soon as I can!) and we were both ridiculously looking forward to seeing Sarah again as the event we went to for Empire of Storms was so much fun.

We arrived in Edinburgh just after 6, and made our way from the station to McEwan Hall where the event was being held (I’m really sorry guys, the only picture I got was the one at the top of this post, I only realised after I left that I hadn’t taken any pictures of the gorgeous room!). We realised after we arrived that leaving super early was a good thing, because the queue was GIGANTIC. I mean I don’t remember the queue for Empire of Storms being small, but this was a whole new level, it was literally snaking around!

Thankfully, the stewards at the event got everyone in pretty quickly so we weren’t stuck waiting for all that long. Once we got inside, we were given some free merchandise (a wristband and a temporary tattoo) before picking up our copies of Kingdom of Ash that we’d got with our tickets. We had a slight moment of confusion whilst we were trying to work out where to go, but thankfully one of the stewards pointed us in the right direction.

THE HALL GUYS. THE FREAKING HALL. Like I said, I wish I’d remembered to take pictures because it was so gorgeous. You could not have picked a better event for a Sarah J Maas event if you tried, basically McEwan Hall is where Edinburgh Uni have their graduations, and it’s totally gorgeous, with all these huge columns and this amazing decorated ceiling and….well you just have to see it, but it’s really, really nice. I was at the McEwan for the Guilty Feminist recording at the Fringe in August, but they’d put in all different seating for that, and I’m pretty sure you couldn’t see the ceiling or anything, so yeah it was like seeing the room for the first time.

The event started a little late, since we had to wait for the stewards to get everyone from outside in, but everyone was so excited when they finally brought Sarah and Katherine Webber (the moderator) out, that it didn’t really matter.

Listening to Sarah talk about both Throne of Glass and ACOTAR was so much fun, she’s a very entertaining speaker, and there was a lot of laughter throughout the evening, especially when she told us the story about the last minute panic to get Kingdom of Ash under 1000 pages, because the glue wasn’t physically strong enough to hold a book of that size! Sarah just gets so excited about her stories and her characters that it’s lovely to hear her talk, she’s basically a fangirl about her own books which is brilliant to see. It was so cute, when she came out and saw the size of the crowd, she mouthed Oh my God, she just couldn’t believe so many of us had come out to celebrate her success. Thankfully there were no spoilers for Kingdom of Ash in her discussion, since I obviously haven’t read it yet. We did get some great insights into her writing process for the book though, which was lovely to hear, including that the ending line, which she had hinted at two years ago when I saw her for Empire of Storms, had indeed remained the same. It also turns out that her favourite book in the Throne of Glass series is Heir of Fire, same as mine and that she has as little chill about Manon as I do, both of which made me very happy!

She also told a great story about what inspired the scene in ACOMAF where Feyre and Rhys have to stay in that inn where the room is way too small-turns out, Sarah had a similar experience when she was in Edinburgh for the Edinburgh Book Fest, she got in late and the only room available was the attic room, and it was so small that she could barely move in there. That particular story got a lot of laughs!

She’s also so amazingly passionate about the women in her stories, she talked about how important it was to her to give her female characters the same heroic stories that she saw given to men growing up and that made me so happy, because I love seeing powerful women with agency in the stories I read. She also talked about how much fun it was to write female villains (they get better clothes) and that she would have liked to write more about Maeve because she found her really fascinating-I seriously hope this is a hint that there may one day be Throne of Glass spinoffs, because I would totally read that. I also liked that she talked about how important it was for her to include verbal consent in her books, because that is absolutely something that needs to be more of a thing.

Sadly, we did not get too many hints about future books. This is definitely the end of Throne of Glass for now, barring the World of Throne of Glass book coming out next year, but she did say that she would consider coming back to the world if the right story came along, so there’s definitely hope for the future. The World of Throne of Glass sounds really cool though, it’s a guide to the Throne of Glass world, set ten years after the end of Kingdom of Ash, told as the librarian of the royal library gathers information about the world for a history book. I was initially sceptical about The World of Throne of Glass, but now I’m really excited for it. We did also get some hints about the spinoff ACOTAR books, each book is going to follow a different character, but there will be an overarching story going through all of them. Sarah also told a really funny story about how she pitched them, basically she pitched them to her agent whilst out drinking (in a totally non serious way) but it turned out that she really liked them and then sold them to her editor! She did briefly mention Crescent City, her adult novel that’s due out next year, but we didn’t find out anything more than we already knew.

Once the discussion was over, it was time for the Q&A. Josh brought out baby Taran to sit with Sarah whilst she was answering questions, and I have to admit, I’m not a baby person but he was darn cute! The questions had to be cut short because of the late start to the event, but she still had some really great answers-the questions had been submitted by readers in advance. It’s always fun to hear author answers to readers questions, and Sarah was so candid and funny with her answers: my personal favourite was that her dream dinner party would be with JK Rowling, Legolas and Cleopatra-that would be quite the eclectic party!

Nicola and I sadly didn’t get the chance to meet Sarah, neither of us were one of the 50 who got the golden tickets, but the girl next to us did, and she was so excited which was really lovely to see. We both agreed that it was better that neither of us got one than one did and one didn’t-though there was one couple who that happened to, and a lovely woman offered her ticket to the girl so both she and her boyfriend could meet Sarah together, which we both thought was super cute.

Before we left, we wanted to get a picture with the screens in the foyer, so we waited and asked a girl who was heading out if she minded taking our picture. It took a couple of attempts, but we landed on the picture at the top of this post, which we both thought looked pretty good!

So there we go, my second ever Sarah J Maas event. I didn’t get to meet her this time, but that was okay, Nicola and I still had an amazing night, fourth year has been so stressful that it was great to get a night out to celebrate the end of what has been an incredible series, and a massive part of my life as a blogger, since Throne of Glass was one of the first books I ever reviewed, only a month or so into blogging. It’s kind of sad to think that it’s all over-but hey, I still have the book to read, so I can deny it for a little longer!

Have you ever been to a Sarah J Maas event? Did you have fun? Are you excited, nervous or sad for Kingdom of Ash? Anyone read it already? Did you enjoy it? (no spoilers, I’ve literally only read the first chapter!) Let me know in the comments!